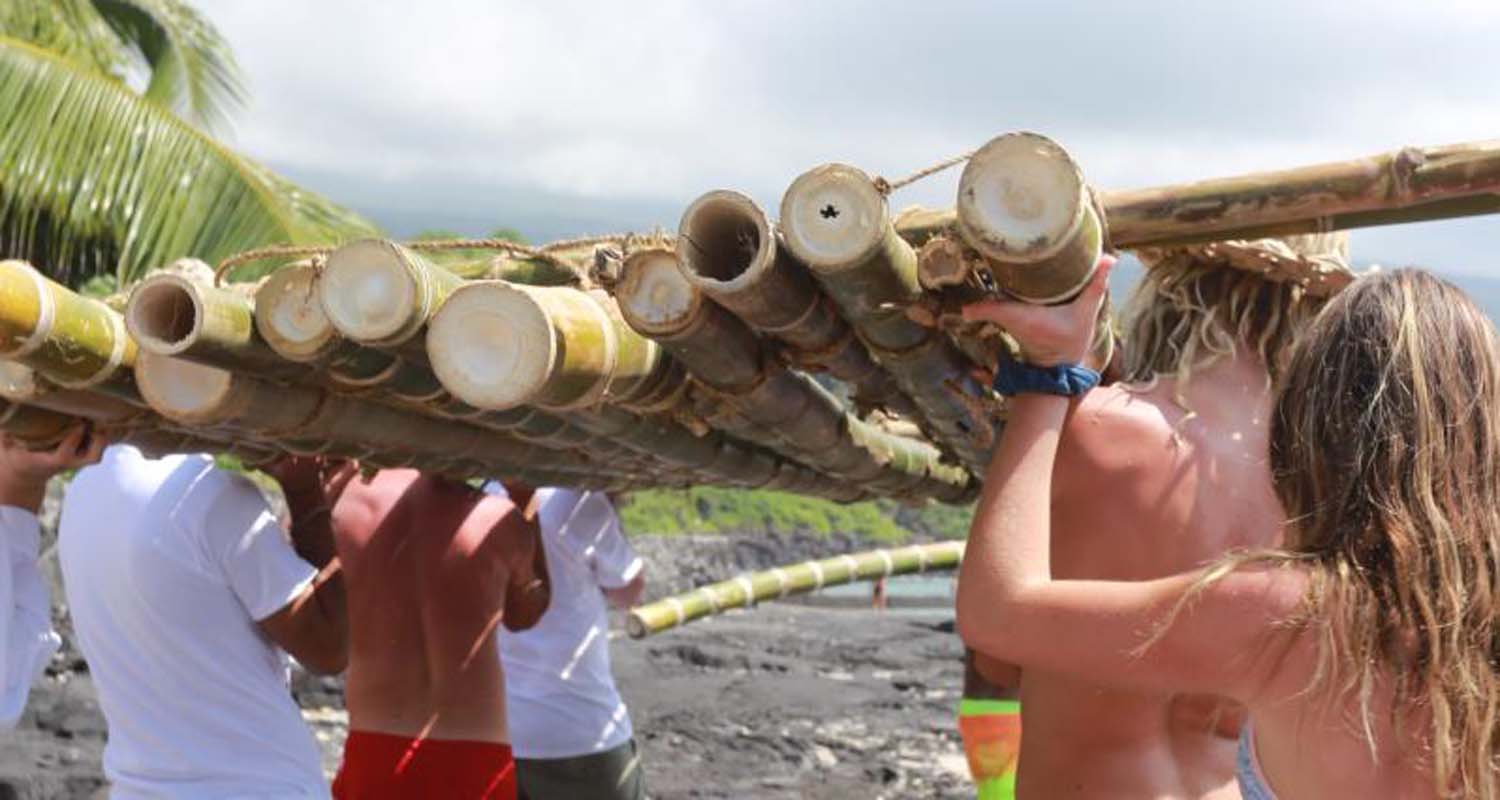 “Once upon a time,” says PPC Ambassador Alison Teal, “there was a Norwegian explorer by the name of Thor Heyerdahl, an adventurer who decided to take on a big journey from Peru to Easter Island. Heyerdahl built a raft named Kon-Tiki, and took it on this grand expedition across the South Pacific Ocean.”

The “female Indiana Jones with a cause, a camel, and a pink eco-surfboard,” has traveled to Australia, Indonesia, Israel, the Peruvean Andes, the Peruvian coast, Fiji, Morocco, New Zealand, the Grand Canyon, and Hawaii, to name a few, foraging for adventure while spreading her message: surf, survive, sustain, storytelling. Each Alison’s Adventures film project calls attention to global, environmental, and human issues, the biggest one being plastic pollution. She is famous for inventing the plastic bikini, which she wore in Alison’s Adventures Maldives: One Person’s Trash is Another Woman’s Bikini.

Back to Kon-Tiki, the 1947 voyage Heyerdahl undertook to see if it was possible for pre-Colombian people to sail all the way from South America to the South Pacific. His crew built a vessel of balsa logs, and carried with them a battery-powered transmitter and a hand-cranked generator that put out enough energy to power a small flashlight. They managed to sail for 101 days before smashing into a coral atoll in French Polynesia.

That journey has a sequel—Kon-Tiki II, “a melding of history, science and public education”—which will launch Nov. 1 from Peru to Easter Island and back, in two vessels equipped with solar panels to power communications gear, sonar, and a refrigerator.

Kon-Tiki II’s mission is not to plot the movements of early civilizations, but to study plastic pollution in the ocean and its effects on the ocean environment and sea life. The whole voyage lies within a breeze of the Great Pacific Garbage Patch, something Heyerdahl could not have dreamed—or had nightmares—about.

Meanwhile, Alison’s newest adventure began this week in Hawaii (see #RoadToKontiki), “where YouTube stars are joining me to compete for the opportunity to take a spot on the big expedition (#Kontiki2). You can VOTE FOR ME at RoadToKontiki.com.”

During the beach clean-up, Alison and her group attempted to build a mini Kon-Tiki raft (results in photos, below). “And now we have a HUGE appreciate for what goes into creating a raft to withstand such a voyage.”

Both Kon-Tiki II and Alison’s Hawaiian adventure are being underwritten by Opera Software, a Norwegian Web browser company whose chief technical officer, Håkon Wium Lie, will be among the crew of Kon-Tiki II. Lie is not only a communications technology genius, he happens to be the guy who basically invented cascading style sheets, and is also a member of the Pirate Party in Norway, a political party that advocates for, among other things, privacy on the Internet. And, Lie is a plastic pollution activist. He will be uploading data constantly from the expedition, during the United Nations Climate Change Conference in Paris in December. Says Lie, “They can slog through the data as we collect and draw conclusions while we are still aboard.

“The Peruvian Current has never before been mapped for plastic and molecular pollution. The balsa wood rafts are perfect platforms to make people aware of this giant environmental problem,” says Lie. “During the trip, we will be taking samples, measuring plastic concentration level in around the pacific garbage patch using sonar as well as collection, which will help in determining how this is currently affecting the ocean.”

Stay tuned for more of Alison’s adventures on the road to Kon-Tiki II.