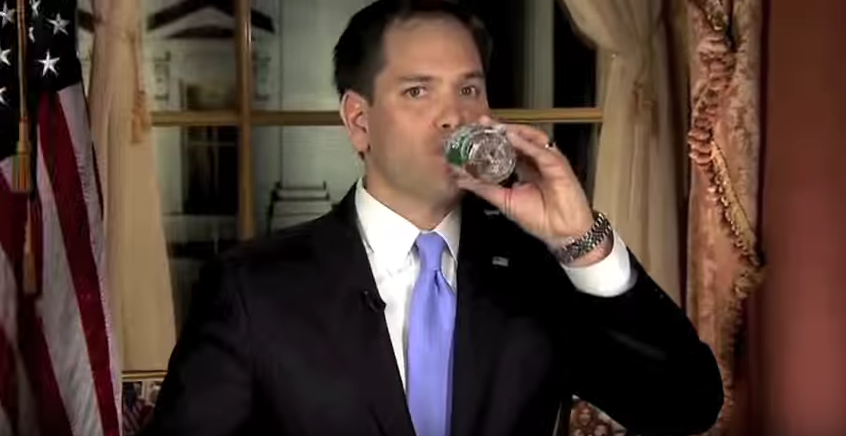 Which Politician Would Address Plastic Pollution?

Remember when Marco Rubio, the Republican junior senator from Florida, was tapped to deliver the annual rebuttal to President Obama’s State of the Union Address in 2013? In the midst of pleading for a “strong America” and a small government, his lips began sticking to his gums. He reached awkwardly for a beverage while urging us toward “the gloal of gobaliberty,” and then he took a quick nip from—what else?—a small plastic bottle of water.

That moment may be the only time plastic pollution graces the lips of any of our U.S. presidential hopefuls.

As we make our way through the long 2016 election season and witness policy debates among both Republicans and Democrats, the critical issue of plastic pollution has yet to come up at all. Climate change also has so far barely been mentioned by either party, especially the one to the right, even while the two-week long COP21 global climate talks in Paris were convening last December.

For example, does Florida, from which four of the major party candidates hail, have any legislation on the table that would reduce microbeads, plastic bags, or polystyrene foam containers from clogging the everglades? Does New Jersey have a hope or a prayer against the petrochemical industry, given Gov. Christie’s sordid record of deal-making with corporate polluters? There are two physicians running for president, including the Green Party candidate, so what do you imagine either of these scientists would do as president about plastic pollution? And of course, about all things, What Would Hillary Do?

Send us your thoughts about the candidates, and we might include them in an upcoming discussion in Plastic Free Times. It’s time we spark a real debate about what really matters to the well-being of not only our democracy, but our entire planet.

Thanks for being a part of the movement to stop plastic pollution.

Elizabeth is the editorial director. Please email your remarks to her at editor@plasticpollutioncoalition.org.

0 responses to “Which Politician Would Address Plastic Pollution?”