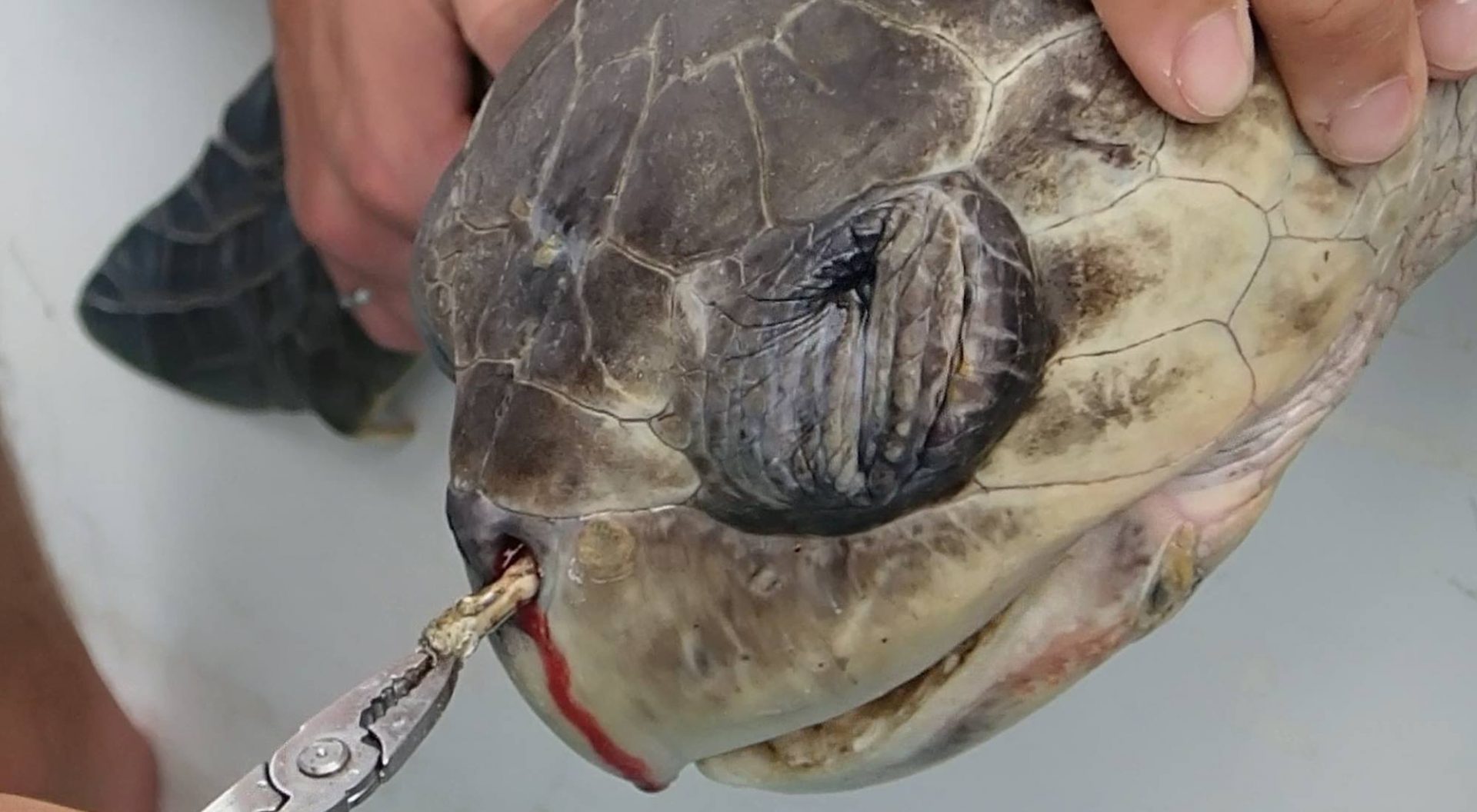 take the ‘no plastic straw’ pledge

By now, more than 6 million people have seen the disturbing 8-minute viral video of the sea turtle with a stream of blood draining from his nostril, as two researchers work to extract a 4-inch plastic straw. A shortened version can be seen here.

The plastic was lodged in the turtle’s nasal cavity, reaching down into his throat, inhibiting his breathing and sense of smell—a turtle’s most important tool for finding food. It was no doubt messing with the turtle’s orientation and migration, and possibly even hindering his ability to find a mate.

“He might have also had trouble eating,” said Christine Figgener, a PhD student at Texas A&M University and a sea turtle expert, who was on the team that found the distressed creature and gave him aid. “Imagine you are regurgitating a hard spaghetti—for example while laughing—which ends up in your nose and gets stuck.”

Figgener and fellow researcher Dr. Nathan J. Robinson aren’t sure how long the sea turtle was swimming around with that thing in his nose. “It didn’t look super new, but who knows.

“We have been talking about the detrimental effects of straws for years, but seeing that video, as horrible as it was, is what we needed to wake people up,” Figgener said in an interview with Plastic Free Times, two months after the video was first posted on YouTube.

The turtle was a sexually mature Olive Ridley male—an endangered creature, found in waters in between Playa Nancite (Santa Rosa National Park) and Playa Cabuyal, off the Pacific shore of Costa Rica. Olive Ridleys are thought to reach sexual maturity at about 12 years, and may live up to 50 years, but they don’t know for sure. “So our guy should have been somewhere between 12 and 50 years old,” Figgener surmised.

Natural predators are numerous, including sharks, killer whales and big fish. But the notoriously slow animal cannot outrun a dog or a raccoon drawn to its nesting place because of someone’s trash that is strewn on the beach. Nor can it always tell a piece of plastic from a tasty crustacean in the water.

When Figgener saw the turtle, she thought, “Is it a straw? Don’t tell me it’s a frickin’ straw.” You can hear her German-accented voice of exasperation and determination in the video.

Figgener said the turtle may have ingested the straw while looking for food on the sea bed. Perhaps he “gagged on it, regurgitated it and it ended up in the wrong passageway. The mouth cavity (similar to us humans) in turtles is connected to the nose; the arch of the removed straw matches this anatomical characteristic perfectly.”

Without their permit for temporal removal of the turtle from its ocean habitat, Figgener said her team could have gone to jail. But after working in Costa Rica for almost a decade, they knew there was no vet around the corner, especially one specialized in reptiles. So they acted, and they filmed it.

After the incidence, Figgener said the team spent the two-hour boat ride back to harbor in silence. “We had no words. We just knew we had to get the video out to the public.”

The team ended up having to leach WiFi from a restaurant. It took eight hours to get the footage uploaded to YouTube, where it just took off. “This video had so much impact (because) it scared/shocked people out of their oblivion.

“I’m a marine biologist and we stumble across plastic and fishing hooks all the time,” she said. “This is my life; it’s my whole life.” Figgener usually walks the beaches at night. Sadly, “At least a turtle per night has some kind of incident with ocean pollution.”

“I had a turtle that had a piece of plastic sticking out when she was dropping her eggs. She’d ingested a plastic bag, and it was tangled in her intestines. When we find dead turtles, we dissect them, and almost every single turtle has some kind of plastic.”

Propeller slashes and cuts from fishing line are the sharks and killer whales of human activity. As for plastic playing a part in threatening the health of marine creatures, says Figgener: “We are grown ups; we can drink out of a glass without a straw.

“People are so worried about their afterlife, but I’m worried about my ecological footprint now in this lifetime. I think that’s what we need to be worried about. Sustainability is actually just that. You want to make things better for the next generation.”

Related: Over Half the World’s Sea Turtles Have Eaten Plastic