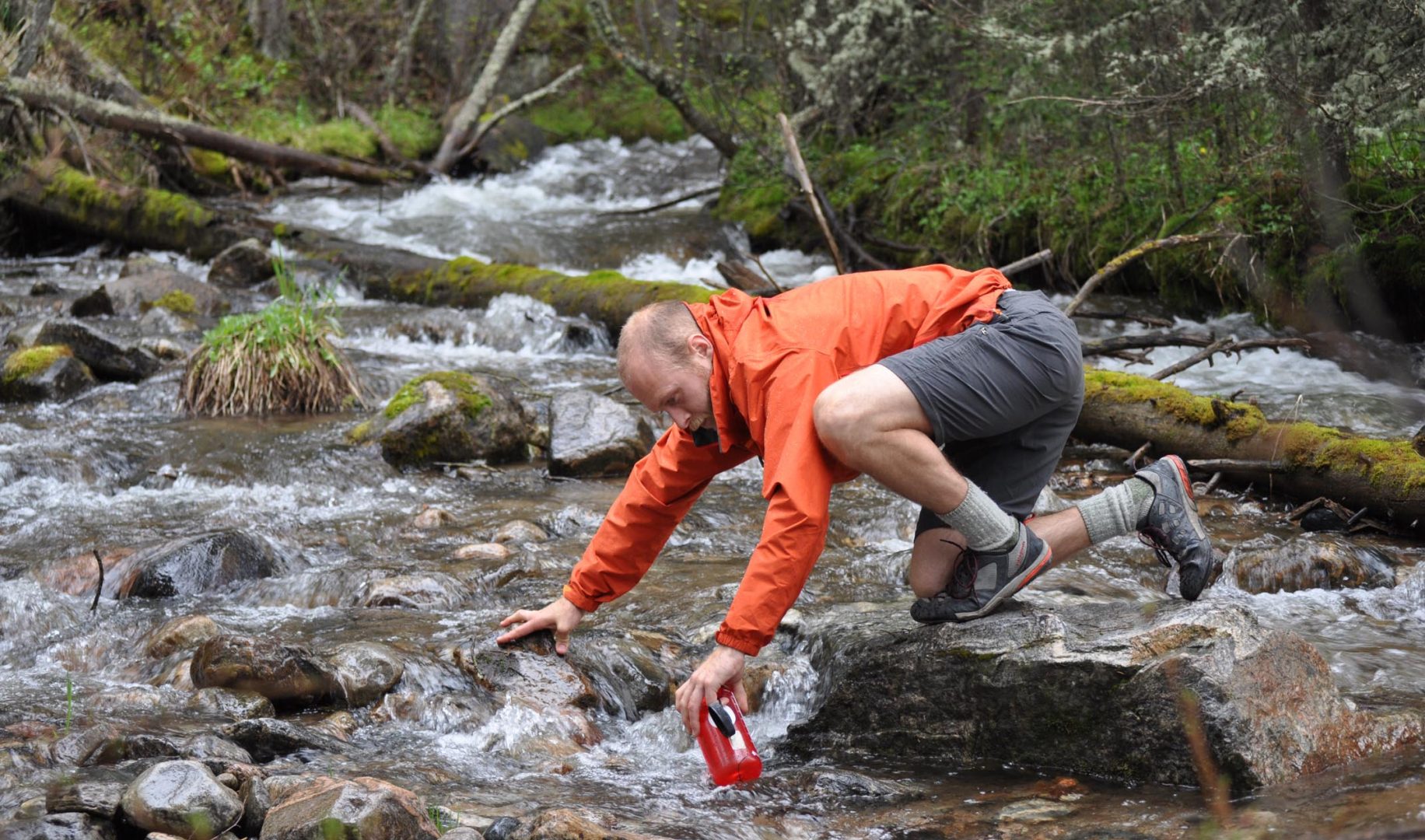 On a hot, clear fall Saturday, I hiked down the trail toward Bacon Rind Creek with two volunteers, and scientist Abby Barrows of Adventurers and Scientists for Conservation. The sun glimmered through the pines, which offered us momentary shade until the flaxen-flanked trail opened up onto a meadow. The creek cut its way through the land, after cascading down from the peaks of Yellowstone National Park.

As I absorbed what seemed like a pristine landscape, I couldn’t help but wonder what was hiding in those waters.

Did you know that every time you wash a piece of synthetic clothing, up to 1,900 tiny particles of plastic can shed into our waterways? Neither did I, until about a year ago when I started working at ASC.

Microplastics — or microfibers — are particles of plastic smaller than 5 millimeters in size. In aquatic environments, these particles can attract and concentrate hydrophobic contaminants, such as PAH, PCBs, DDT, DDE and PBDE.*

An increasing array of scientific data is available on marine microplastic pollution, including our robust dataset from remote ocean ecosystems, in which we’ve found plastic pollution in 93 percent of samples—everywhere from coastal Alaska to Tanzania, Thailand, Antarctica and Greenland.

In the Pacific Ocean, fish ingest thousands of tons of plastic per year, according to a study by the Scripps Institute of Oceanography at California State University San Diego. Once ingested, the particles can travel up the food chain, the associated toxins magnifying via trophic transfer and bioaccumulation, posing health risks for large fish, birds, marine mammals and humans.

As ASC’s dataset grew, it became increasingly disconcerting. The next set of questions seemed obvious: Where were these plastics coming from? What about the rivers and lakes that feed into the ocean? Are they polluted, too?

In spring 2015, ASC expanded its research to freshwater. As of early November 2015, we’ve collected 1,200-plus samples from geographically diverse locations, and are leading the way in the study of freshwater ecosystems.

The Importance of Sampling in Freshwater

Sampling freshwater is crucial to understanding this issue. Our volunteers around the world have already gathered more than 100 samples from places that include a remote alpine lake on Washington’s Olympic Peninsula, a mountain stream in Slovenia, and Peru’s Marañón River. So far, we’ve found that 83 percent of our freshwater samples are contaminated with plastics.

This fall, ASC launched a targeted effort in our Montana backyard: the Gallatin Microplastics Initiative. Trickling from a source high in Yellowstone National Park, the Gallatin Watershed forms the headwaters of the largest water system in the lower 48 states—the Missouri-Mississippi. Through a comprehensive analysis, we aim to establish a baseline of information about plastic pollution levels in the Gallatin. The goal is to use our findings regarding abundance and type to track down major sources of the pollutant, a crucial first step toward reducing the influx of microplastics into the watershed.

In the first year of the initiative, 62 volunteer paddlers, hikers and skiers will survey a total of 71 sites every three months, putting their outdoor skills to work to access hard-to-reach backcountry areas.

In addition to gathering samples from remote locations, ASC prides itself on providing quality data.

“My trust in the volunteers’ ability to collect usable data by strictly following the protocol was continuously reinforced by witnessing the sampling in the field, the attention to detail on the data sheets and the follow-through with sample drop off,” said our lead microplastics scientist Abby Barrows, of the Gallatin volunteer crews.

During the launch weekend for this initiative, ASC teams gathered a total of 130 samples.

What can you do?

The Gallatin volunteers are passionate about protecting their hometown river. What can you do?

Together, we can stop microplastics pollution at its source.

Grace Kay Matelich is the Media Coordinator for Adventurers and Scientists for Conservation. Learn more about the ASC Microplastics Project and sign up to volunteer at https://www.adventurescientists.org/microplastics.html.