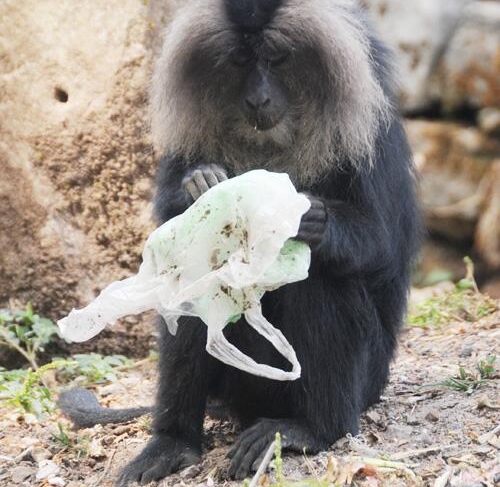 EDITOR’S NOTE: Janette Wallis, Ph.D, is a primatologist and Vice President for Conservation for the International Primatological Society. She is working on an initiative to strengthen awareness about plastic pollution in primate habitats.

As we all know, the availability of plastic is only getting worse worldwide. Though a lot of attention is given to the deadly consequences for marine animals, I’m interested in raising awareness for terrestrial animals, too, using primates as the target group.

Over the years, I’ve seen a steady increase in plastic pollution problems around various primate field sites. I’ve seen a disturbing trend not only in many African sites, but in other locations. For example, a couple of years ago I had the opportunity to go on a world voyage via Semester at Sea, from Florida going east, to California. I arranged to visit primate field sites in each primate habitat country along our route (I called it my Sea Monkey Safari). Unfortunately, I saw similar pollution experiences at each site.

For primates, it is still the case that the biggest threats are deforestation, habitat fragmentation, poaching, and live trade. These are well-known threats that we’ve been addressing for years. But, some other issues are often overlooked and are of growing concern.

One of these is disease transmission. A few years ago, I adopted this as one of my advocacy concerns and we’ve made some good progress in improving field sanitation and tourism practices. Plastic objects are an especially serious threat for primates in this regard. Not only do we see problems of interfering with digestion if/when plastic is ingested (similar to when turtles and sea mammals and birds eat plastic), but since primates are so closely related to us, they are susceptible to most of the same diseases.

Disease transmission can occur through the air, water, and via fomites. In case you’re not familiar with the term, a “fomite” is any inanimate object that can harbor pathogens. For example, if you have a cold and drink out of a cup and then someone else drinks from that same cup and gets your cold, the cup has served as a “fomite.” So, as you can imagine, plastic bottles, plastic bags, and other plastic items can all be fomites.

The startling thing is that some pathogens have a long life. For example, an abandoned toothbrush used by a person with tuberculosis can have active pathogens for up to a week, under some conditions. And, an ape or monkey coming upon a toothbrush or other plastic item is much like a kid—they’ll put it right in the mouth (because they can).

This brings up the other reason plastic pollution can be a special risk for primates. They’re smart. Unlike most marine animals that are accidentally ingesting plastic because they are confusing it for food, the intelligence and manual dexterity of nonhuman primates can get them into additional trouble. They can/will actively seek out bags and bottles, etc., to investigate, manipulate, open, carry around, play with, etc.

There has been a trend for primatologists to incorporate community conservation in their research projects. But, to my knowledge, there are only a few projects that actively include a plastic pollution awareness aspect. One very successful one includes the organized collection of plastic bags in Colombia to turn into crocheted totes for sale. That project creates jobs (mostly for women) and the proceeds go back to the community and also helps primate conservation—in this case, the Cotton-top Tamarin (tiny, highly endangered monkeys). I’d like to see more projects like this—and with new ideas—adopted in other primate sites.

Stay tuned to PPC for more information about initiatives to raise awareness around plastic pollution and primates.