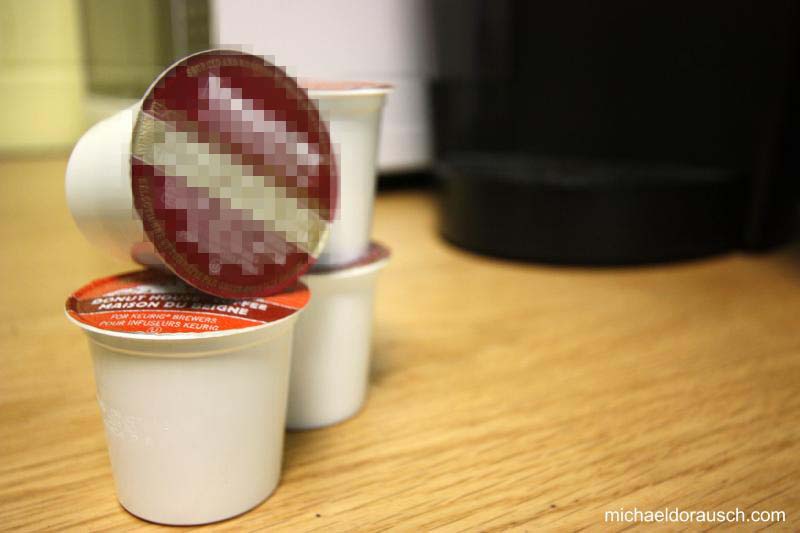 100 Million Fewer K-Cups in Landfills Would Be Nice

If you pay attention to coffee (and who doesn’t?), then you may have heard the inventor of the single-serve coffee maker Keurig loses sleep at night over his invention. That’s because the little single-use coffee pods, called “K-cups,” that go into his machines are pure, unredeemable plastic waste. Mother Jones infamously estimated that in 2013 alone, Keurig produced 8.3 billion of those things—enough K-cups to wrap around the Equator 10.5 times.

Certainly a design that leaves enormous room for improvement. And yet, the Keurig coffee system isn’t going anywhere anytime soon, especially now that its patented design is up. In fact, current coffee industry reports state that Starbucks, Dunkin Donuts and McDonalds are going all in on the K-cup system, gaining market share from Keurig Green Mountain steadily, which made $4.7 billion on them last year. Landfills are already teeming with the consequences of America’s demand for convenience and choice, especially when caffeine is involved.

Rohan Marley, the chairman and founder of “sustainably grown, ethically farmed, and artisan-roasted premium coffee company” Marley Coffee, and also the son of reggae legend Bob Marley, wants to cut into that market share and cut plastic pollution too. His company just released a recyclable K-cup it bills as an “innovative, sustainable single-serve capsule in a recyclable format.” The “EcoCup” is compatible with most Keurig machines, and the company claims it is the first premium coffee brand to bring a sustainable solution to market, five years ahead of when Keurig itself has vowed to do so.

Marley’s announcement was simultaneous with Keurig’s promise to complete a complicated transition from a multi-layer design using No. 7 resins to fully recyclable polypropylene, but they are taking until 2020.

On a media tour stop in Los Angeles to promote his EcoCup, Marley explained the quick evolution of his revolution. After the Keurig machine patent expired more than two years ago, Mother Parkers Tea & Coffee out of Canada approached him with a desire to partner and crack the single-serve market. But Marley was reluctant. He thought, “What about the waste… Im going to get crucified.”

Then, “a solution came that people thought couldn’t happen,” he said. “It’s a revolutionary product—the first of its kind.” He pulled apart a K-cup to show the biodegradable fiber pod, foil top and plastic cup, which looks sturdy enough to withstand the heat needed to brew the grounds. The capsules are supposed to be easy to recycle: peel off the lid of the pod, compost the grounds, discard the lid and filter, and recycle the outer cup. It’s not perfect; no single-use system could be. But it’s an evolution.

“You have to attempt. You have to create something, and then it gets better and better. We’re grassroots; yesterday we weren’t even close to where we are today.”

With a launch of 10,000 stores in North America, Marley expects to command 1 percent K-cup market share out of the box, which would bring revenues of $100 million. Brent Toevs, CEO of Marley Coffee, states “If we can convince 1 percent of the market to switch to our recyclable EcoCup, we estimate we can keep 100 million capsules out of landfills in one year alone.”

One percent sounds small. But Marley says “That 1 percent is going to tell another 1 percent, so it’s gonna grow. One percent is a voice. We can create an impact. We revolutionized how to get a cup of coffee.”

RELATED: Kill The Cup is a whole website devoted to vilifying the thing. ALSO: Here’s a product that separates the K-cup into parts you may be able to recycle.