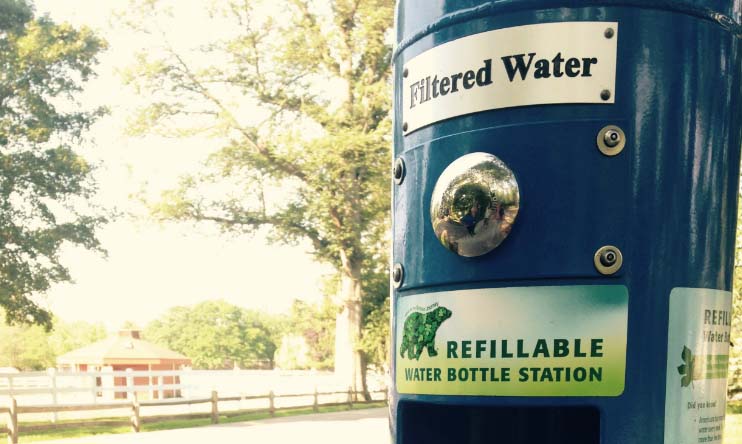 ROYAL OAK, Mich.—The Detroit Zoological Society has successfully weaned 1.3 million Detroit Zoo visitors off the bottle. In August 2013, the DZS launched a three-year initiative to discontinue the sale and use of bottled water—and has completed the phase-out almost a year ahead of schedule. Only a few bottles of water remain on zoo concession shelves; once they are sold, the phase-out will be complete.

Bottled water previously was the No. 1 seller at Detroit Zoo concessions and generated nearly a quarter-million dollars in annual sales—but bottled water is also the single largest contributor to plastic waste in the U.S.

“Although the phase-out has cost us revenue, we believe it’s more important to walk our talk and do what’s good for the environment,” said Ron Kagan, DZS executive director and CEO.

To help make the transition easier for visitors, the Detroit Zoo sells inexpensive reusable water bottles at concession stands which can be refilled for free at one of 20 filtered-water stations throughout the grounds. Since the phase-out began, zoo guests have purchased more than 15,000 reusable water bottles instead of bottled water.

Interpretive signage has been installed throughout the zoo to inform visitors about the water bottle elimination initiative and educate them about the impacts of plastic waste.

According to the Earth Policy Institute, it takes 5 liters of water to make 1 liter of bottled water, and it requires about a quarter of a water bottle of oil to produce, transport and dispose of a single bottle of water. Americans throw away 38 billion water bottles each year. For every 10 bottles of water consumed, eight of the empties are tossed in the trash and end up not only in landfills but also in the water, soil and other parts of the environment.

“The completion of this phase-out means that Detroit Zoo visitors are joining us on our green journey and helping to keep more than 60,000 single-use bottled water containers out of our landfills annually,” said Kagan.

The water bottle elimination program is just one of many initiatives of the DZS Greenprint—a strategic plan to refine and improve daily practices and facilities at the Detroit Zoo and Belle Isle Nature Zoo, develop new policies and programs, and improve green literacy in the community. In recognition of these continuous efforts in sustainability—including completion of a $2 million energy efficiency improvement project and plans to build the first dry biodigester in the country—the DZS last year was honored with the only Green Award given by the Association of Zoos and Aquariums.

Story and photo by the Detroit Zoological Society. Used with permission.