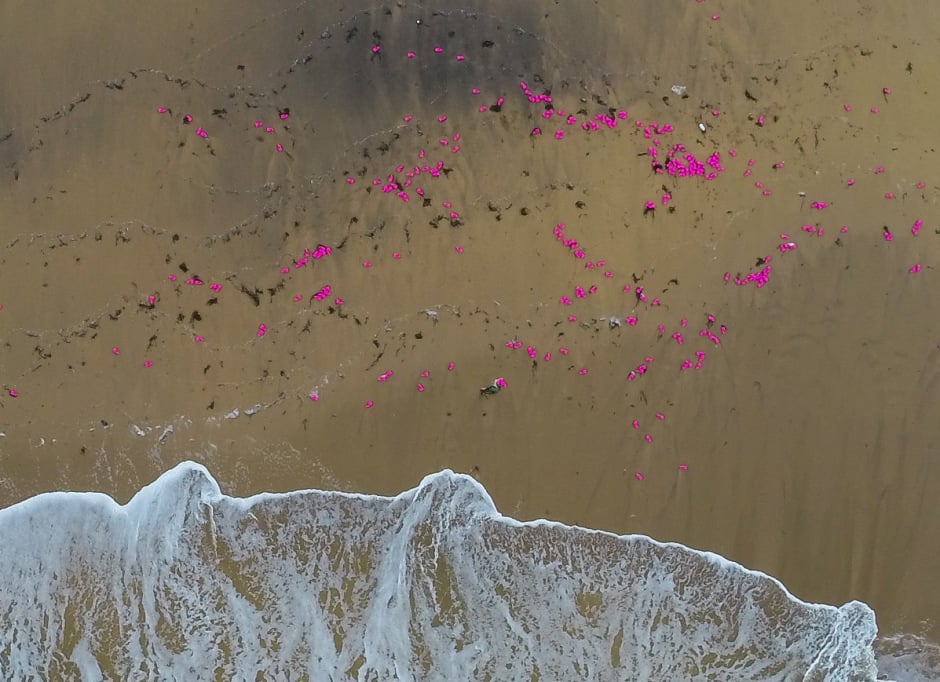 The Message in 27,000 Pink Plastic Bottles

Like a day-glo naval assault, thousands of pink plastic bottles landed on the UK coastline during the past week. The bottles invaded the Cornish coast in south west England after they were rallied and mobilised by winter storms. Thought to be the cargo from a shipping container declared lost by the MV Blue Ocean last May, this pink peril flotilla contains Vanish, a household stain remover.

The manufacturers of the cleaning product, Reckitt Benckiser, assure the public that the Vanish bleach solution poses little threat to wildlife, but of greater concern are the bottles themselves. Presently their shocking pink appearance makes them easy to spot and subsequently recover, but over time, smashing into Cornwall’s rugged coastline, these bottles will become microplastic fragments and pose the greatest threat when, mistaken for food by fish and birds, they are ingested and enter the food chain.

Following the development of this story on social media, people in Cornwall spoke of wave crests turning pink, an overpowering smell of bleach and entire beaches covered in bottles, as if infected with a nasty pink rash. Matt Burtwell of Aerial Cornwall, an aerial photography company managed to record the distribution of the bottles at Poldhu Cove on the Lizard Penninsula, Cornwall.

There have been many interesting discussions across social media about accountability, with people very quick to point the finger at Reckitt Benckiser, however apportioning blame in these situations is not so simple.

Reckitt Benckiser put trust in a shipping carrier that their consignment of Vanish would be delivered safely and on time. Likewise, we can only assume the crew of the MV Blue Ocean acted responsibly in the midst of a storm off Land’s End. Treacherous conditions at sea are unfortunate and such incidents will often be deemed ‘acts of God’ by insurance companies, but this offers little comfort to the coastal communities battling the elements to rid their beaches of these ghastly pink invaders.

One such person is Instagram user @__lucybloor__ who found herself helping with a beach clean this week, as did @indiekitchen, a Cornish record label. Another, @oceanpositive_fourthelement, a Cornish company using ghost fishing nets to make swimwear, helped with cleaning beaches in partnership with Surfers Against Sewage, one of the many organised beach clean ups. Cornwall is a stunning location to call home and which many local businesses depend for their livelihood.

In the 21st century, incidents like this only serve to highlight our over-dependence on cheap, imported goods. The desire for cheaper labour and production costs often means products are manufactured far from their country of use, and rely heavily on the shipping industry. Indeed, in her book Deep Sea and Foreign Going, Rose George  explains that a shocking 90 percent of the goods in our homes have arrived by cargo ship. Whilst we remain so reliant on global trade, cargo spills like the pink bottles are sadly inevitable.

In 2013, the World Shipping Council reported that 120 million containers were moved around the planet, so cargo spills must be happening all the time. Those more newsworthy items capture the public’s imagination, like the pink bottles, or the 28,000 yellow ducks that spilled from a container lost in the Pacific back in 1992. Knowing what to look for, the public was able to spot the ducks and provide data for studying ocean currents, as made famous in Donovan Hohn’s book, Moby Duck.

Shipping isn’t going to change when we are so dependent on it, and storms at sea are inevitable. It has been heartwarming to see people coming together to tackle the symptoms of the problem. Facebook has been used to connect beach clean groups, mobilise a cleanup operation and monitor the distribution of the bottles, some of which have drifted as far away as Holland. Beachcombers in England, Ireland, Wales, Scotland, France and the Netherlands are on the lookout for pink bottles and ready to report their arrival and organise beach cleans.

Collaboratively we can make a difference in remedying the problem but still have a long way to go if we are to prevent it altogether when the basis of global trade is so dependent on the movement of boxes around the planet.

The global market offers manufacturers cheaper labour and materials, but all too often in the case of cargo spills, a hidden price is paid by those coastal communities saddled with the cleanup operation. It is their tourist industry and fishermen who suffer. Container losses are impacting the marine environment in ways that have yet to be fully understood, and undoubtedly this will be a price we all end up paying if nothing is done.

The message in these pink bottles must therefore be for a more collaborative approach when tackling the marine debris problem. Flotsam knows no boundaries and carries no passport. By making use of communication networks which are already in place online, we can grow the global community of beachcombers to develop an effective monitoring network.

As an artist working with materials gathered on the UK coastline, I have followed the pink bottle story with considerable interest. In my work, the tideline is a source of inspiration as I consider the stories behind the objects I find washing ashore, wondering how far they have travelled, who they belonged to and how long they have been at sea. Each object becomes a thread to be woven; strands of a story which tell of modern consumer habits, tastes and fashions.

Through my flotsam tapestries, I seek to document the zeitgeist; a drama played out along the shoreline where characters are plastic, and until we are prepared to address the problem together, there will be no happy ever after.

Almost all aspects of our daily life are represented along the tideline, from cosmetics to clothing, toys to trainers, and this latest pink arrival is sadly nothing new. With time, these bottles will become another anecdote when walking on the shore, a story to be told about container spills, much like the Lego, motorbikes and even space debris that have made the news recently. More mundane objects or unrecognisable components must be washing ashore every day but we are not so quick to identify them as shipping container escapees.

Once the news of these pink bottles fades, we must remember that twice a day on each tide, arrive thousands more nondescript, orphaned objects, only to be washed out beyond the horizon twelve hours later with the turning tide. What is the message in 27,000 pink bottles—Vanish?

U.K. artist Jo Atherton documents the items she finds washed up on the Cornish beach on
her blog Flotsam Weaving, where this post originated. Used with permission.