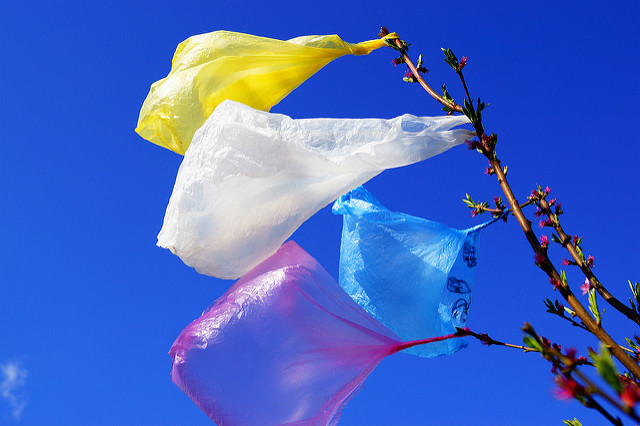 Two years ago, the Golden State took a strong stance against plastic pollution when Jerry Brown signed SB 270, which made California the first state in the country to ban single-use plastic shopping bags. While environmental groups celebrated the victory, a group of American plastic bag manufacturers quickly organized, gathering hundreds of thousands of signatures to put the ban on hold and place the issue before voters on the 2016 ballot.

Next month, Californian voters will come face-to-face with that effort when they vote on Proposition 67, also known as the “California Plastic Bag Ban Veto Referendum.”

Organized under the American Progressive Bag Alliance, out-of-state corporations have poured some $6 million into the pro-plastic bag campaign, including $3.2 million on a paid signature gathering effort to get Proposition 67 on the ballot in the first place. Their campaign mantra? Plastic bags are actually better for the environment than alternatives, or as the APBA puts it on its website, they are “the smartest, most environmentally-friendly choice at the checkout counter.” Specifically, the Alliance insists that plastic bags are recyclable, generate less waste paper alternatives, and result in fewer greenhouse emissions than paper bags.

Of course, Big Plastic has an agenda. According Californians Against Waste, an environmental nonprofit that supports the bag ban, as a result of the postponement of SB 270, roughly 192 million single-use plastic bags continue to be distributed in California every week. Industry profits in the state are estimated at $208 million a year.

Environmental groups have hit back, challenging the Alliance’s pro-environment rhetoric. Yes on 67, Protect the Plastic Bag Ban — a coalition of environmental, businesses, labor, and consumer groups — points to the impact plastic bags have on ocean pollution and marine wildlife, noting that plastic bags are often ingested by sea turtles, otters, seals, fish, and birds. More than 450 organizations, elected officials, and private companies have endorsed Proposition 67, including dozens of local, state, and national environmental groups.

“The plastic bag industry’s arguments don’t make a lot of sense,” says Sejal Choksi-Chugh, executive director of San Francisco Baykeeper, one of the many organizations that have come out strongly in favor of Proposition 67. “A single-use plastic bag that takes about 1,000 years to degrade into smaller pieces of plastic… is wasteful and harmful to the environment, period.  We see the evidence ourselves on freeway overpasses, at shoreline cleanups, and on ocean beaches: Plastic bags are one of the most prevalent kinds of trash littering our environment.”

Prop 67 supporters are also taking their message out of state. Last week, representatives for Save the Bay and Clean Water Action — both San Francisco Bay Area-based environmental groups — travelled to the Hartsville, South Carolina headquarters of Novolex, the largest single-use plastic bag manufacturer in the world and the number one out-of-state spender working to defeat the California ballot measure. They brought with them 50,000 signatures from California-based Prop 67 supporters, along with thousands of plastic bags collected from across the state, asking that the company stop funding the Proposition 67 opposition campaign.

The plastic-bag industry has also thrown its support behind Proposition 65, a second bag-related measure on the November ballot in California. On it’s face, Proposition 65 seems innocent enough: If passed, it would require grocery and retail stores to donate the 10 cent paper bag fee it collects from customers who don’t bring their own shopping bags to a special environmental action fund administered by the Wildlife Conservation Board.

Some 150 California cities and counties have local laws banning single-use plastic bags. Most of them require stores to charge for paper and reusable bags, and allow the stores to keep the money made from selling the bags. Prop 65 would basically take this money from the stores and put it into a state account.

Environmental groups have resoundingly come out against the measure, arguing that it is a ploy to split the pro-67 vote.

Steve Maviglio, a spokesperson for Yes on 67, didn’t mince words about Proposition 65 when responding to questions by email. “Prop 65 was designed for two purposes:  To confuse voters, and as payback to grocers for joining our grassroots coalition to ban single-use plastic bags.” Opponents of this measure also point out that unless voters approve Prop. 67 to phase out plastic bags, there will be “zero” funding for the environment from Prop. 65.

Still, Maviglio is optimistic about Prop 67’s chances, and believes that a statewide ban in California could spur action elsewhere. “California has always been a pioneer in protecting the environment, whether it be tailpipe emissions or climate action,” he says. “When Prop 67 passes in California, it will be a catalyst for plastic bag bans around the world.”

Ultimately, on November 8 it will be up to California voters to decide how many more plastic bags will litter our parks, beaches, and waterways.