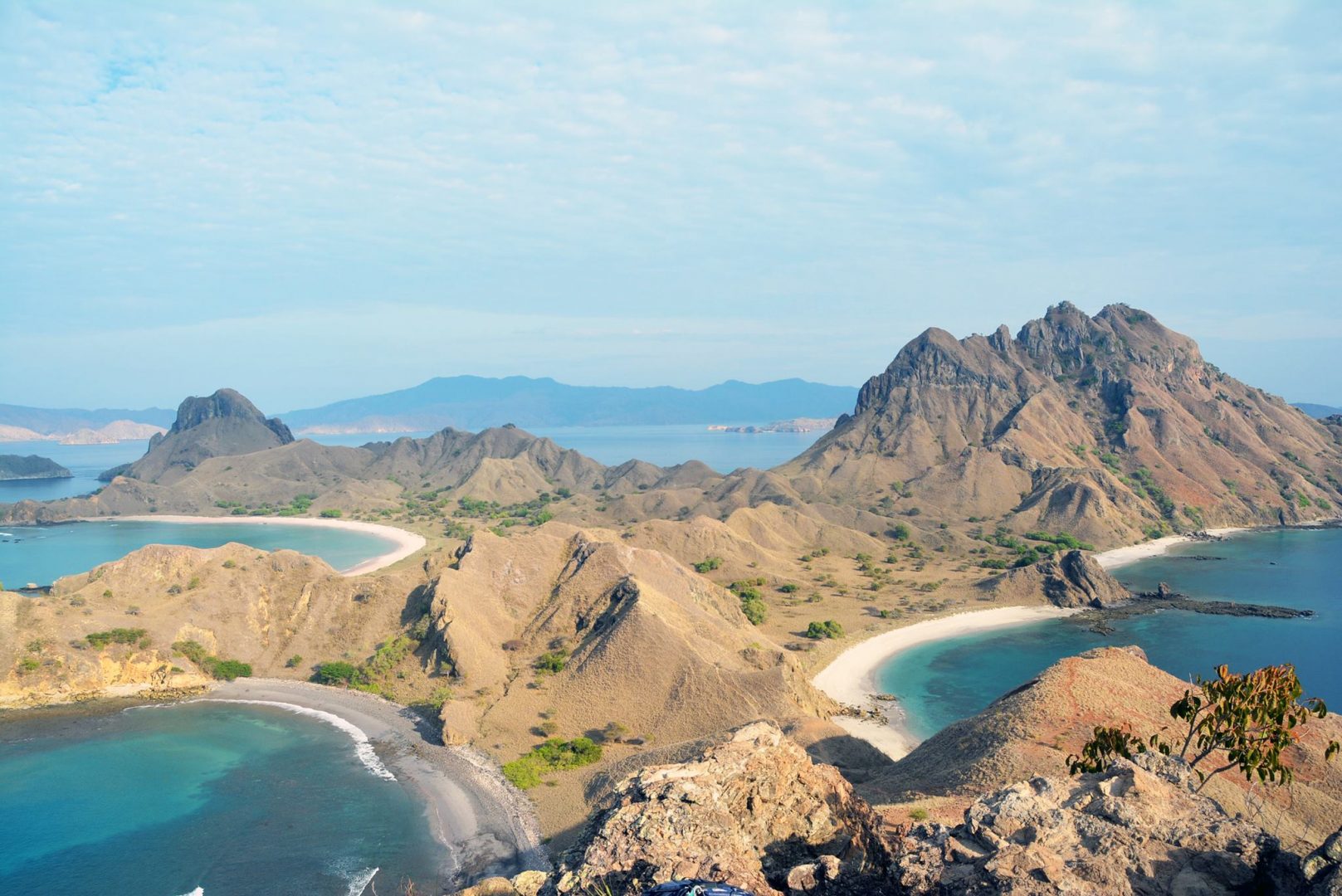 Earlier last month, scientists, artists, and leaders embarked on a 10-day boat expedition from Bali to Komodo, Indonesia, to document plastic pollution. Throughout the trip, the group encountered plastic garbage in the ocean–both on the surface and on the ocean floor––invading animal habitats and littering the most remote of beaches.

“On this expedition we saw first hand that plastic has reached the far corners of the Earth,” said Dianna Cohen, co-founder and CEO of Plastic Pollution Coalition. “We saw coral entangled in plastic, single-use plastic cups and straws on beaches, and monkeys playing with discarded plastic food wrappers and bottle caps.”

The Coral Triangle is known for its vivid natural beauty, but in recent years, plastic pollution has become an increasing invasive species throughout the area. “There was not one beach or reef we snorkeled at in the 10 days we were there, no matter how remote, that was not impacted by plastic trash,” said Wayne Sentman, a leader on the expedition and Oceanic Society’s director of conservation travel programs.

There was not one beach or reef we snorkeled at in the 10 days we were there, no matter how remote, that was not impacted by plastic trash.

A crucial component of the trip, a collaborative effort of Oceanic Society, Drifters Project and Plastic Pollution Coalition was connecting with local partners working to address and eradicate plastic pollution throughout Indonesia. The group met with organizations Bye Bye Plastic Bags, Plastic Diet Kantong, and Coral Triangle Center, in addition to local partners Olivier Pouillon, a waste reduction expert from Bali Recycles, and Amiruddin Using, a local naturalist and the founder and coordinator of PPC and Drifter’s Project’s “Plastic Free Island – Bali.”

These organizations raise awareness and educate the community about plastic pollution reduction in Bali and throughout Indonesia. Pouillon works directly with waste collectors in Bali to improve waste management systems and has started a trash tech startup called Gringgo.co that helps Indonesian cities clean up plastic pollution. Bye Bye Plastic Bags is a social initiative started by two sisters in Bali. In just three years, the youth-led initiative has grown to 30 student volunteers and has pushed leadership in Bali to eliminate single-use plastic bags by Jan. 2018. 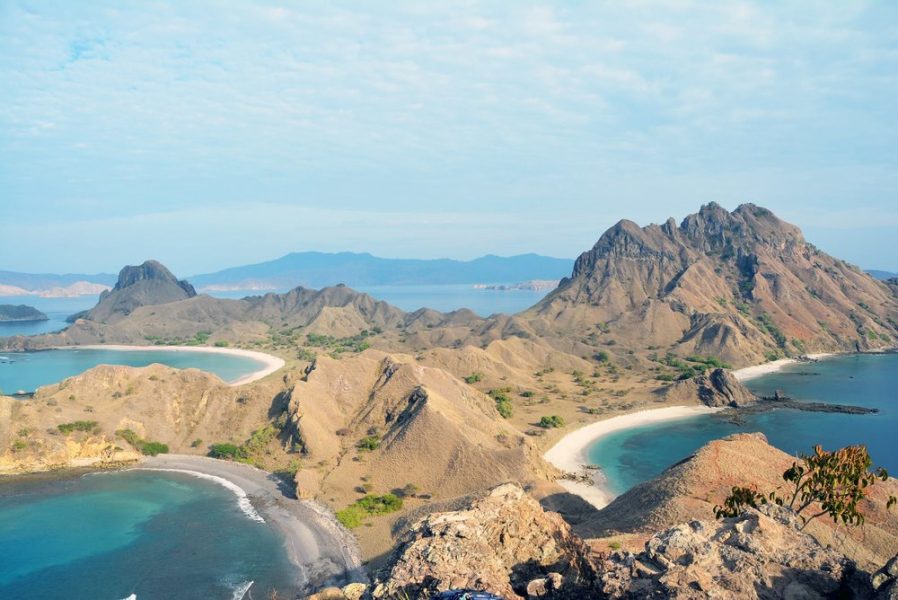 The Coral Triangle is known for its vivid natural beauty but also increasing plastic pollution. Photo by Leilani Gallardo 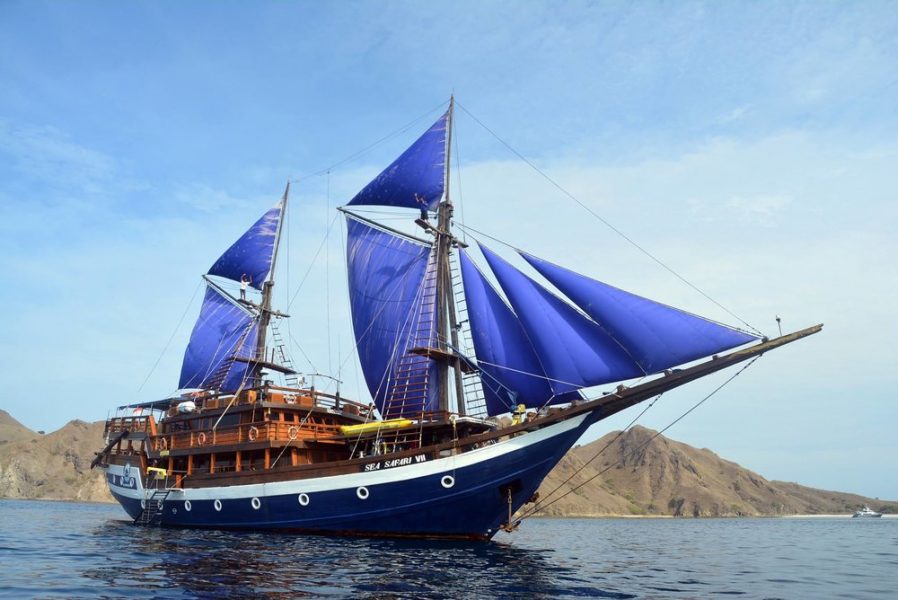 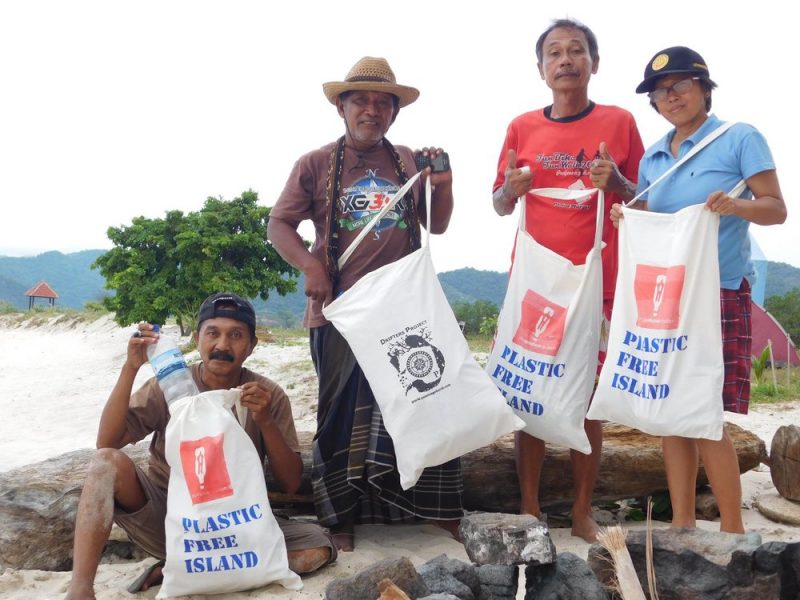 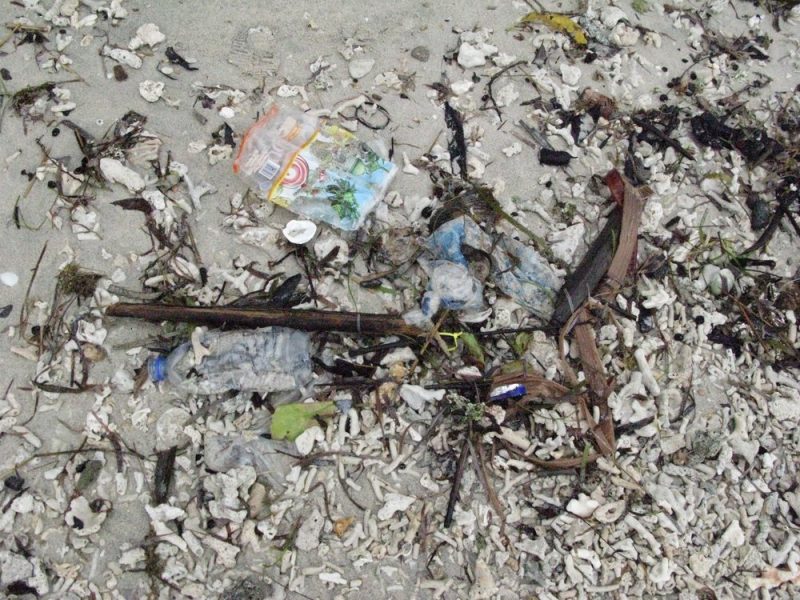 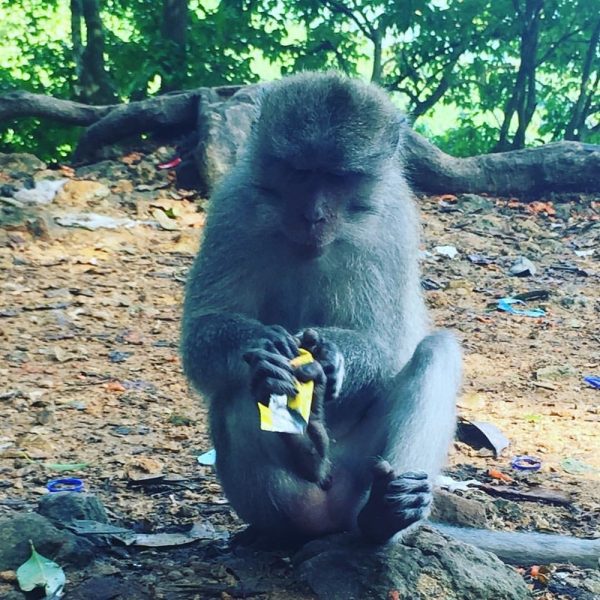 On the island of Lomback, a monkey plays with plastic food packaging. Photo by Dianna Cohen 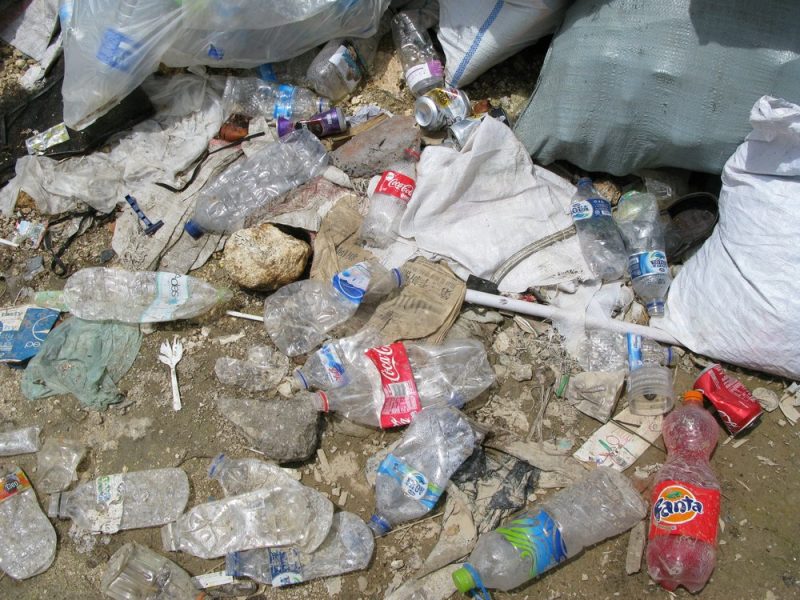 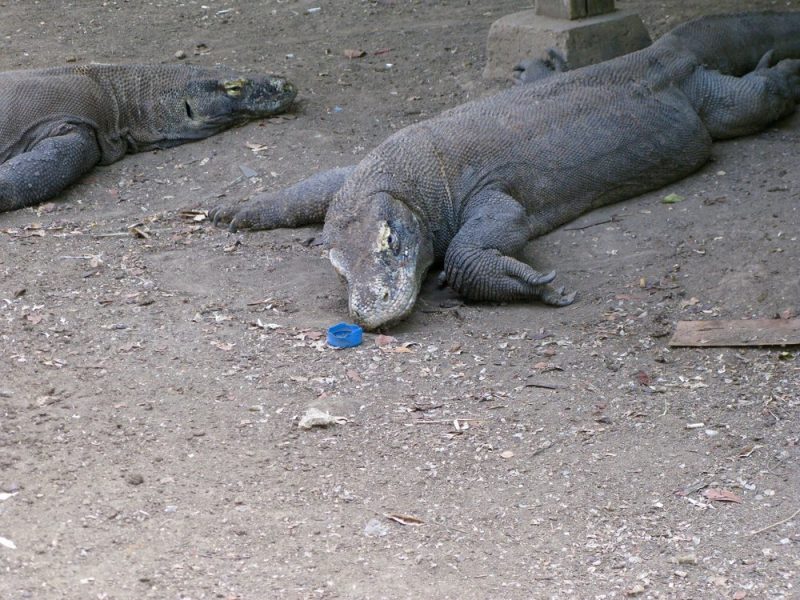 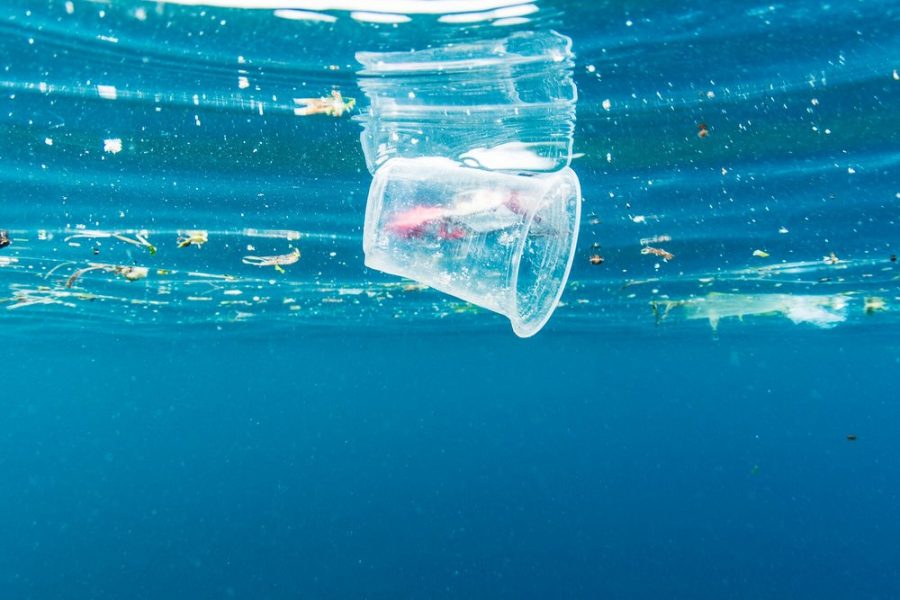 Single-use plastic cups were among the top items found. Photo by Peter Oxford 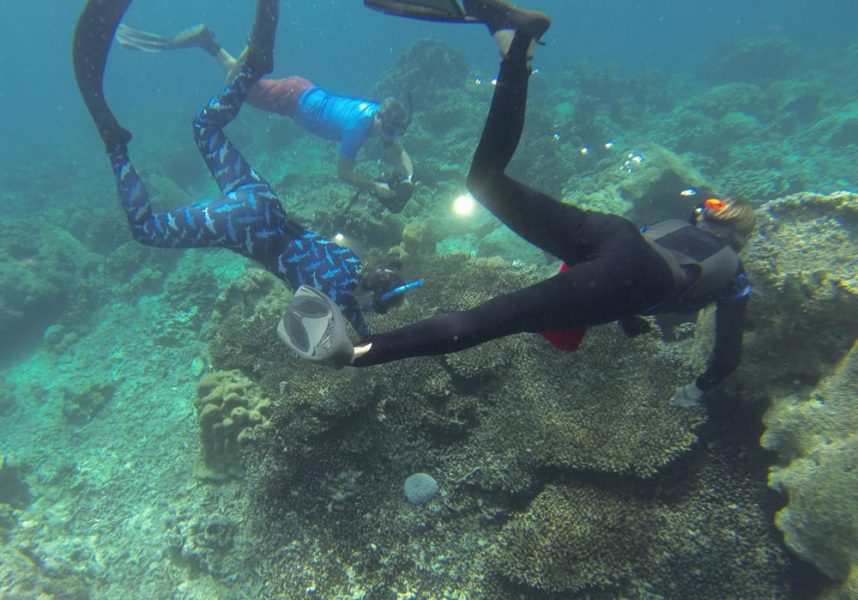 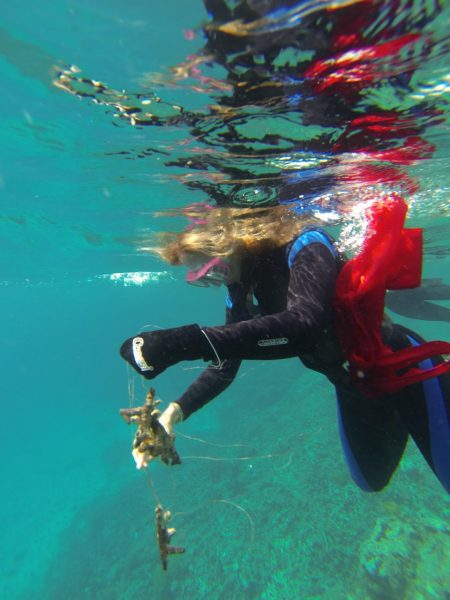 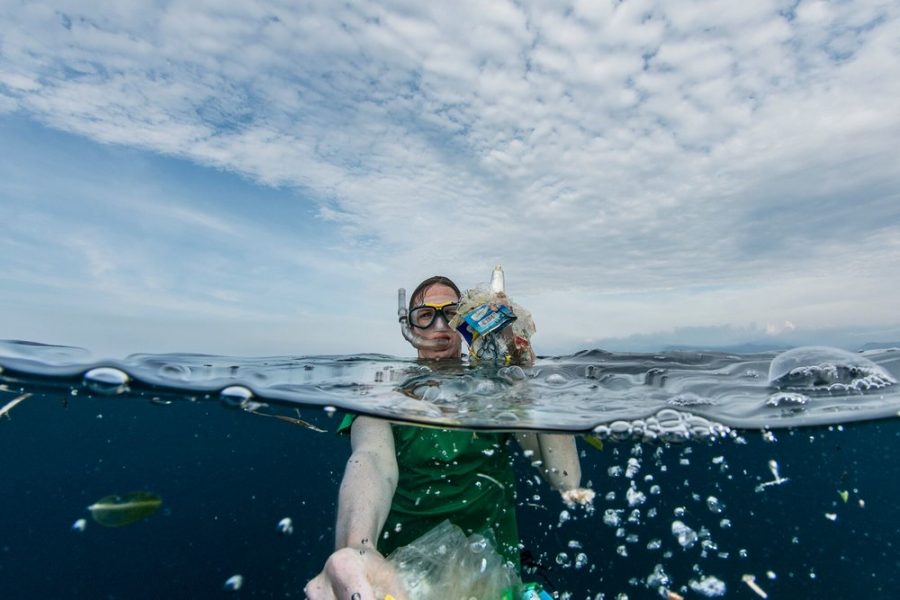 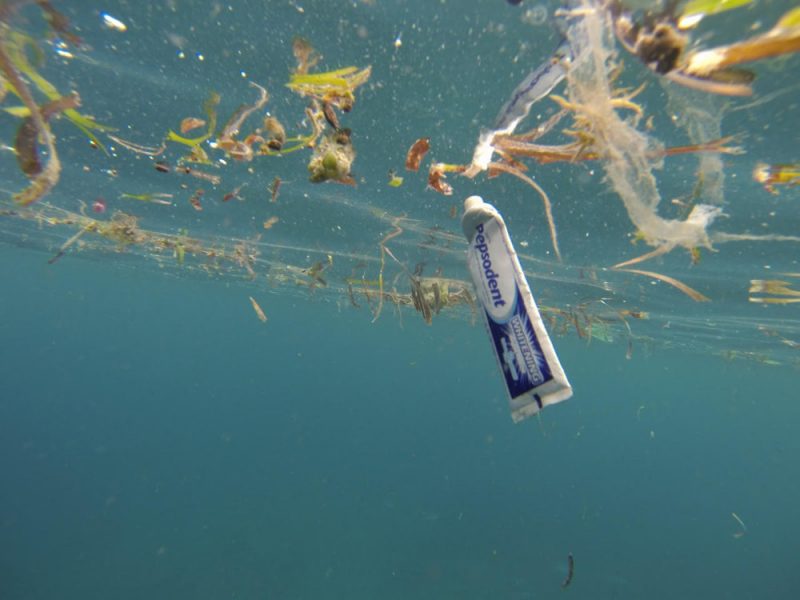 An old plastic tube of toothpaste. Photo by Pam Longobardi 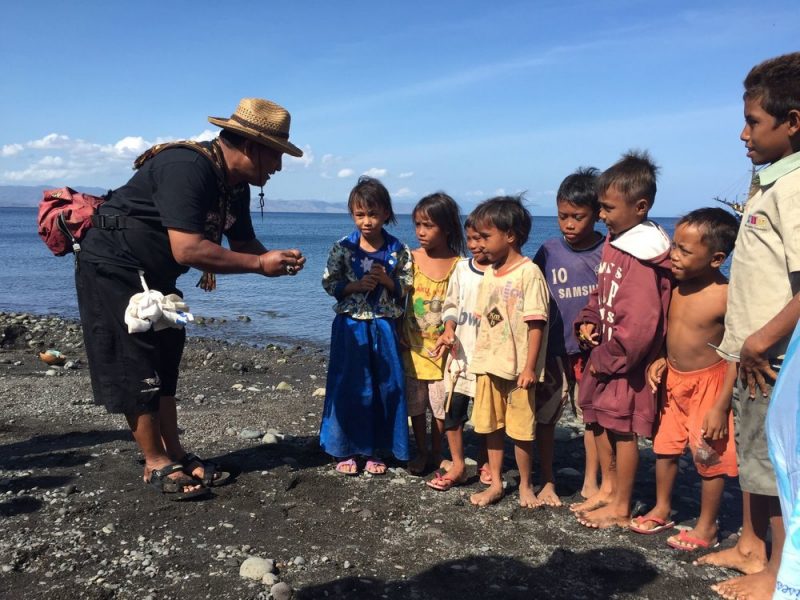 Local naturalist Using talks to children about the plastic on their beaches. Photo by Dianna Cohen 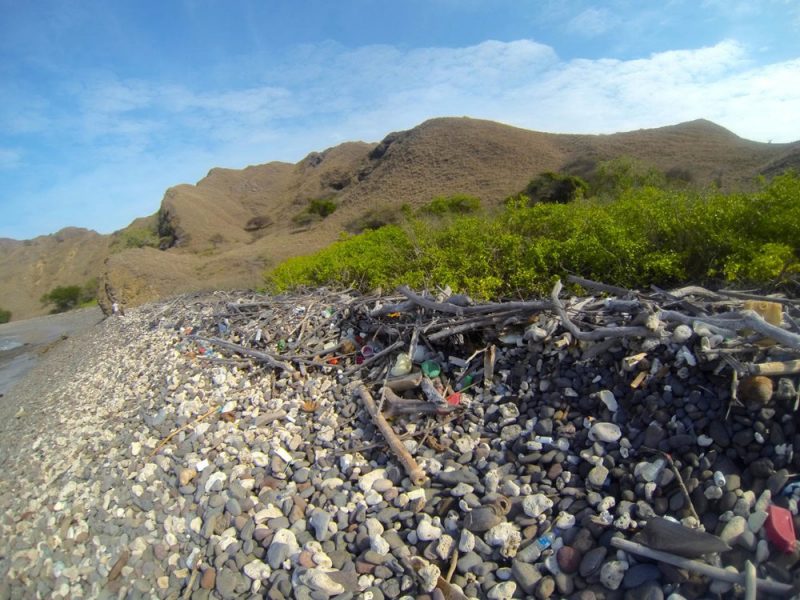 “Previously, my habit was just picking up plastic waste that I found on the shore and in the ocean,” explained Using, who in the few years has increased the scope of his work to helping local people and businesses reduce their use of plastics.

“Reducing disposable plastic in the tourism industry is very important for the sustainability of the industry,” said Using. “I start by replacing plastic straws with reusable stainless steel straws. I explain to the public that plastic pollution is very dangerous to our health, then I invite them to work together to save our beautiful Earth from the pollution of plastic waste. I do this every opportunity that I get.”

Leilani Gallardo, who joined the expedition as a representative of Coral Triangle Center, a conservation organization that promotes marine biodiversity, spoke to the beauty along the journey: “we were swimming above a dozen manta rays, cruising alongside a pack of melon headed whales, and paddling next to sea turtles.”

There was coral growing over the monofilament with living creatures on it. We removed more than 50 feet of fishing line and saved the coral.

And amidst the colors and corals was plastic garbage. “On land, we saw so much plastic food packaging from junk food,” recalled Longobardi. “Underwater we saw many places where fishing line was tangled in coral. There was coral growing over the monofilament with living creatures on it. We removed more than 50 feet of fishing line and saved the coral.”

On Komodo Island, the only place in the world home to the Komodo dragon, the group again saw plastic caps and pieces on the breaches and in a dragon’s regurgitated “bolus.” On the island of Lombok, Cohen photographed monkeys playing with plastic. “There were vendors selling peanuts, and people would buy them for the monkeys and dump the package on the ground, polluting the natural environment and attracting the monkeys to chew the plastic.”

On the water, Cohen saw that “floating plastic becomes a vector for invasive species. Animals such as hermit crabs end up using yogurt containers or plastic bottle caps as a home.”

The most common types of plastic the group found were thin plastic disposable cups and straws (many discarded from cruise ships) and single-use packets of personal care items like lotion and shampoo. On one island, locals had devised a recycling program for these packets called Plastic Sampang (Plastic Bank), where women would weave the plastic wrappers into upcycled purses and bags.

At one point on the water, a giant grouper fish came to the surface near the boat with its swim bladder exploded. The fish, likely over 50 years old, typically resides in deep waters. After putting the fish out of its misery, members of the expedition prepared and ate the fish for dinner. In the stomach of the fish? An old hook, a new hook, and plastic fishing line.

Sentman, who has worked in the marine environment for 25 years, notices a shift in worldwide consumer habits based on the types of the plastic he finds. “In the 90s I saw mostly plastic lighters and roll on deodorant balls. In the 2000s I started to see increasing plastic bottles and printer ink cartridges. Now in the 2010s I am starting to find plastic trash like cell phone cases that speak to a ‘new’ type of plastic pollution we are creating. Like all the others before, it still ultimately finds its way into the ocean and does not disappear.”

“All the plastic items each of us found were messages from the ocean,” said Longobardi of the journey. “And the ocean is so clearly saying: help.”

2 responses to “Dragons to Debris: Documenting Plastic Pollution on Remote Islands of Indonesia”