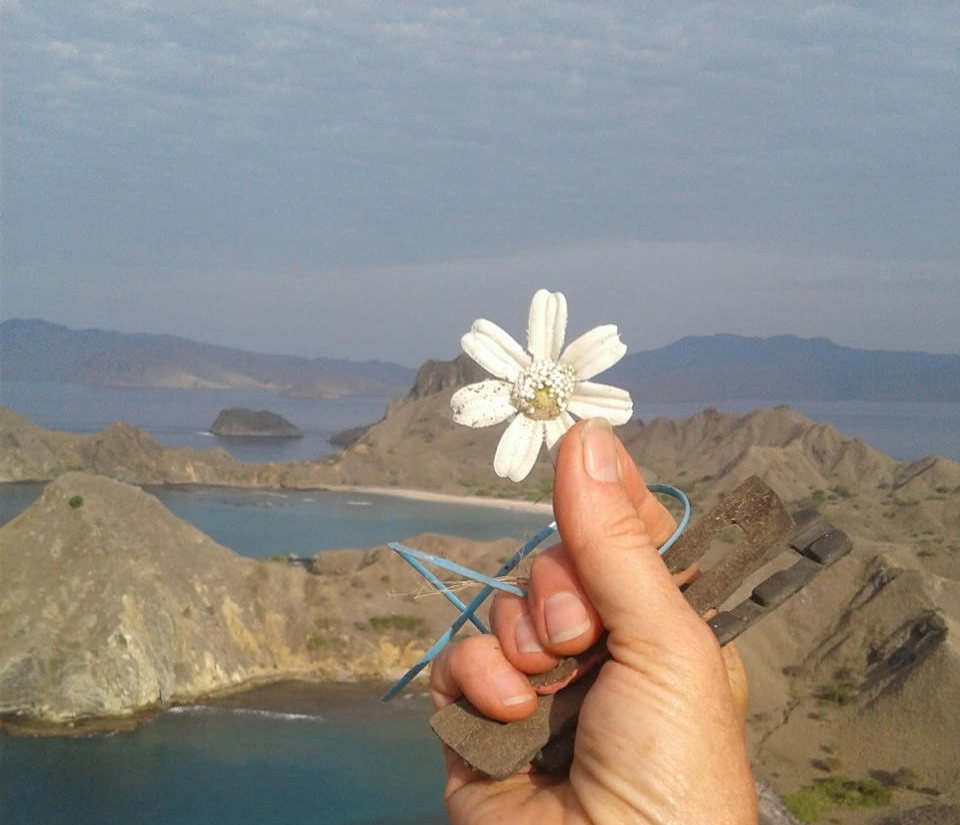 A golden light matches the wonderful golden smell that envelopes the nose upon entering the Balinese taxi: it is the pungent shavings of coconut that are part of the small baskets of flowers and symbolic items laid daily as offerings of the nature-based Balinese Hinduism. This beautiful daily ritual is evidenced everywhere: on the street, on pathways, the beach, roadside altars, and even in the taxi dashboards. A place of deep spiritual connections to the natural world, Bali was the launching port of our 10-day Oceanic Society/Drifters Project/Plastic Pollution Coalition expedition from Bali to Komodo and back, and my second trip was even more magical than my first in 2014.

Our crew was a dedicated team of international experts on plastic pollution: artists, scientists, activists, world-class photographers, philanthropists, and explorers, joined by Indonesian counterparts, naturalists, and conservation specialists. Prior to our launch, we laid important groundwork in a series of meetings with local organizations from Bali and nearby islands: Bye Bye Plastic Bag Bali, Diet Kantong Plastic, and the Coral Triangle Center.

To my great joy, Amir Using was once again our Indonesian naturalist and guide. As a fellow plastic pollution warrior who by chance was our guide in 2014, our meeting was the most important outcome of the first expedition. I made him an official Drifters Project member with a gift of our Plastic Free Island team shirt and 100 stainless steel straws. He told us that these things, the team shirt and the straws, were his ‘weapons against plastic.’ Over the two years since we had met, Amir had mobilized Plastic Free Indonesia to an extent that brought tears to my eyes.

Taking the logo copied from the shirt, Amir had hand-printed large reusable collection bags that he took to nearly a dozen different islands for beach cleanups. He had broadcast to his network of ham radio operators and gained their support for remote island cleanings, spoken to children’s groups about plastic pollution dangers, and marched in festival parades with volunteers picking up plastic garbage along the way.

Amir was a force for change within Sea Safari, the expedition company he guides with. He worked with management in the adoption of new habits and ways of reducing plastic by switching from disposable plastic cups, bottles and straws to reusable metal bottles and straws. He had built an army of plastic warriors in Indonesia. When we boarded the ship, he presented us with big beautiful hand-printed cotton bags that the whole team used for underwater and coastal plastic collection!

We had our work cut out for us. Before we even made landfall on any of the remote islands we were to visit, we found ourselves in a floating maelstrom of ocean plastics: cups, food packages, straws that we snatched from the surface and dove down to collect. Getting close to the deeper corals, we noticed monofilament plastic fishing line ensnared in the corals heads which we cut loose with knives. The amount of water-borne plastic was much worse than even two years ago. Free divers Ann, Caroline, Dianna and I untangled meters and meters of line from the coral heads, while the amazing photographer of the GYRE expedition Kip Evans, did the heavy lifting shooting all the action with his 20-pound underwater rig.

Some of it was heavily encrusted with life: sponges, corals, tunicates, barnacles, crabs. Amir and I spent an hour or more carefully extracting the living creatures from their plastic snare and returned them safely to the sea.

Our first landfall with the team was the coastal village of Moyo, that had been the site of a spontaneous beach cleaning with the children of the village in 2014. I led a forensic beach cleaning, while microplastic scientist Abby Barrows of Adventure Scientists trained crew members in the protocol for water sampling for microfibers which she will study onboard with her portable lab. Surprisingly the beach was remarkably cleaner than it had been in 2014, though there were still plenty of ocean messages in the plastic we recovered. As soon as children and other villagers gathered to help us, Amir translated that since our visit two years before, the village had been doing weekly beach cleanings, and the school teacher had been educating his classes about plastic pollution. It was a most extraordinary development, and as we waited for our boat, tiny 2-, 3- and 4- year old girls helped me sift micro plastic from the sand at the dock. Their sharp eyes and tiny fingers were excellent at this task and they were excited by the game of it.

Our next major island stop was Padar, a spectacular uninhabited island formation. On landfall, we were greeted by a sparsely plasticized beach, and a carved wooden sign saying “No Litter” in Indonesian. Climbing the steep dusty trail, the island’s amazing shape is slowly revealed. I started noticing small plastic bits on the trail and began to collect them, realizing I had a whole collection of decorative elements from designer shoe soles that fell apart on the rugged trail: Nike, Crocs, Bata etc. With 35 or more by the time I reached the top, the trail became a plastic ‘walk of shame’ for all the companies that left their plastic parts in paradise. I created an impromptu collage of these red and black designer garbage – a temple of shoe shame.

From the top, I could see three distinct half-moon shaped beaches, one white, one black and one pink. We had landed on the white one, and directly opposite it, on the windward side, was the black beach being pounded by huge perfect peeling waves.  We could see signs of massive plastic inundation, so on the way back down, several of us veered off and hiked the steep path to the shore.

It was a plastic beach, just full of every sort of namable and unnamable object, much of it very old. I heard later from Amir and other crew who had been there many times that they had never looked there before, and likely the beach had never been cleaned. Abby found a nearly disintegrating plastic durian fruit with remarkable detail; Steve, a beautifully ornate picture frame of plastic mimicking carved wood; and I found numerous odd fishing floats in shapes I had never seen before. We were without water and overheated to the point of exhaustion but the beach was so raw, so despoiled and so untouched we stayed for several more hours gathering as much as we could carry away.

The spaces between islands were raucous with life. We encountered pairs of sperm whales, emitters of the loudest sound on earth, and a pod stretching to the horizon of probably thousands of small cetaceans the onboard naturalists Identified as melon-headed whales. We boarded the smaller dingies and approached them and as dolphins do, they bow-ride the pressure wave off the front of the small craft, surfacing and jumping in unison, playing in the wake.

Another day we snorkeled in an area that was having a major planktonic event. The water was thick with iridescent flashing darting forms at the surface while the bottom had enormous rafts of sea urchins clustered in mating that were releasing millions of small brick red eggs that attracted huge schools of fish swirling in bait balls and scores of manta rays gliding through the soup of food. This was a pristine day of almost no plastic encounters – a true paradise.

Our final days were full of interesting encounters from the ocean – in the form of messages in plastic. This is the part of my practice that feels the most connected to the larger network of life-force, and when others experience it, I see their thrill and feel the same amazement I feel every time it happens to me, even after 10 years.  I talk about the ocean communicating with us through the material of our own making, the plastic. As the team had been actively collecting for over a week, they were finely tuned to plastic awareness. Caroline found the first symbol, a beautiful translucent turquoise water faucet, of particular meaning to her: she has just started a water protection foundation. Artist and musician Alvaro Soler Arpa found his message: a big plastic decal that said ‘Studio Music.’ Wayne, who makes much of his magic at Oceanic happen through countless hours on phone conferences: a cell phone cover. Lisa and Jean found an amazing readymade installation- an ancient Ultraman arm sticking out of the sand, ‘drowning in plastic.’ And Ann, deep diving breath-hold diver, found a spectacular plastic chicken meters under the sea in perfect shape: it was a children’s piggy bank.

Much of the plastic that we recovered was transported back to Lombok and will be donated to a most fantastic social enterprise group called the Bank Sampah NTB Mandiri or “Garbage Bank”. Brainchild of Aisyah Odist, this enterprise actually pays individuals rupiah for the collection and cleaning of plastic trash, like the ubiquitous food packages everywhere in Indonesia. More ambitious individuals can also cut and fold the plastic into interlocking links that create beautiful handbags, wallets, purses and other finely crafted items that are for sale in their boutique. Additionally, they compost organic matter into fine planting soil and make inventive planters for sprouts and seedlings. The level of skill and organization was truly impressive, and the output of stunning products of Bank Sampah make this a model organization of upscaling and creative reuse. Many of us bought beautiful works to gift to others.

Our first seeds planted two years ago have taken root and flourished in ways beyond my wildest expectations. We are now joined to a network of plastic-fighting warriors with firm traction in place because of dedicated individuals and organizations from the Coral Triangle Center ambitious and far-reaching goals to the super kids of Bye Bye Plastic Bag Bali to Amir’s tireless efforts on island after island. It is a moment of great joy and celebration that we end our expedition on…. only to come back to learn that our election has taken a most disastrous turn. What will this mean for our collective future? For me, it galvanizes my commitment to fight for the beauty and infinite creativity of nature. We are an army, we are growing, and we have only just begun. But we are racing against time.

Pam Longobardi is the founder of Drifter’s Project. She is a notable member of Plastic Pollution Coalition, and the Oceanic Society’s Artist-In-Nature. This piece originally appeared here.