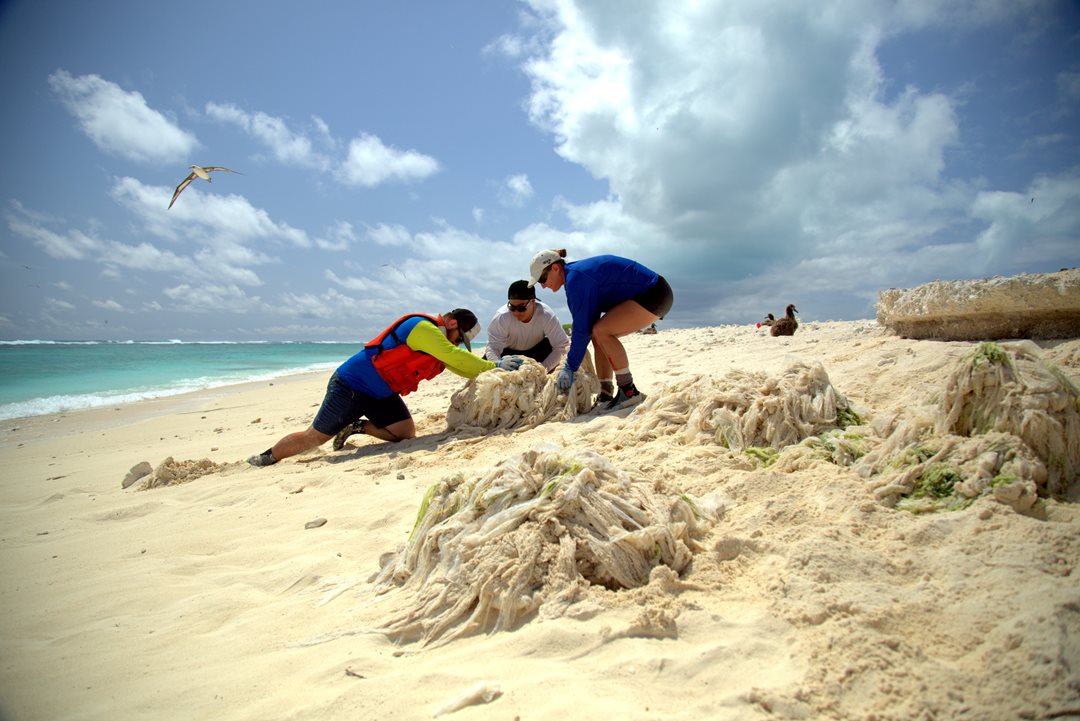 Midway Through Cleaning Up Midway Island

The NOAA Pacific Islands Fisheries Science Center (PIFSC) Coral Reef Ecosystem Program’s (CREP) removal mission in the Northwestern Hawaiian Islands, is already halfway through! The removal team has finished its work at Midway Atoll and is headed to Kure Atoll for the next phase of the effort. 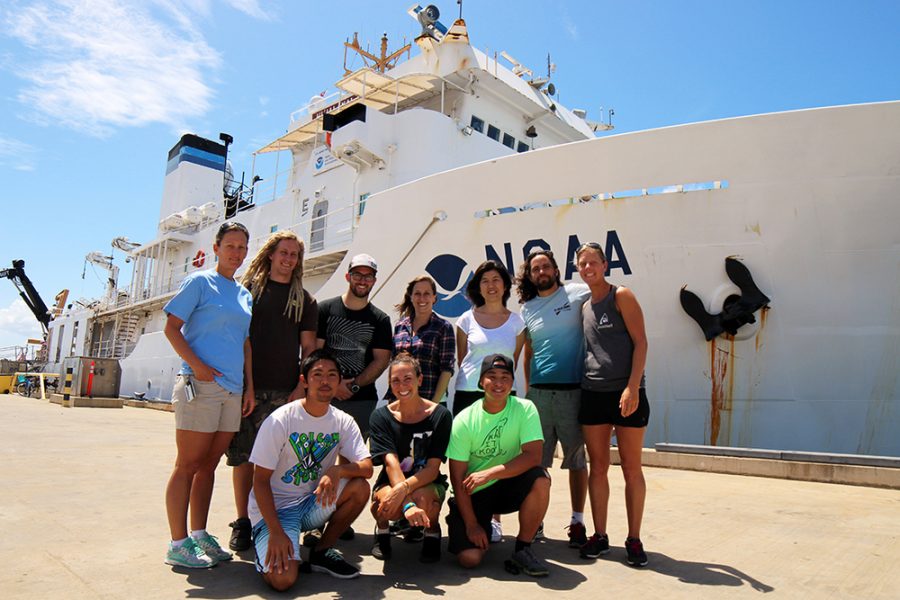 Since 1966, NOAA Fisheries and multiple agency partners have conducted surveys and removal of marine debris in the NWHI on a nearly annual basis. 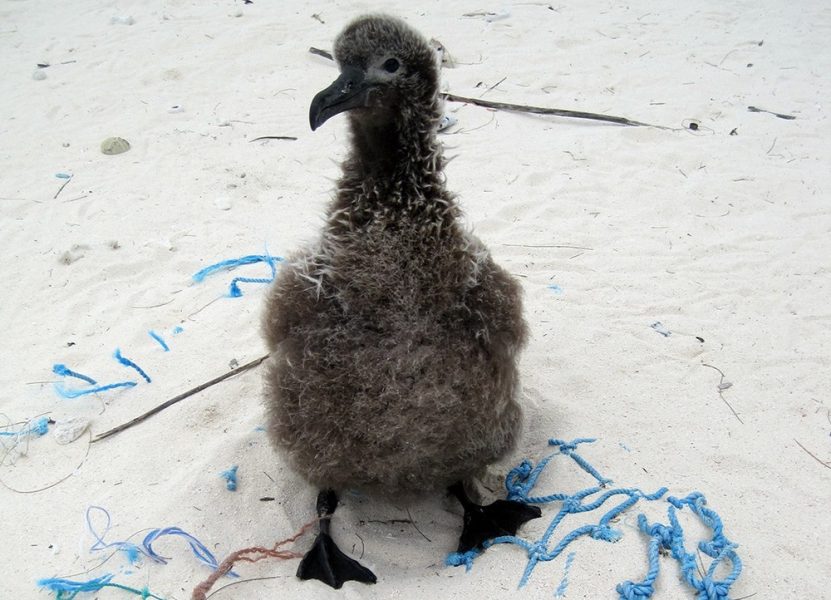 Located at the far northwestern end of the Hawaiian archipelago is a circular-shaped atoll with three small islets that provide nesting habitat for millions of seabirds, including the world’s largest population of albatross. 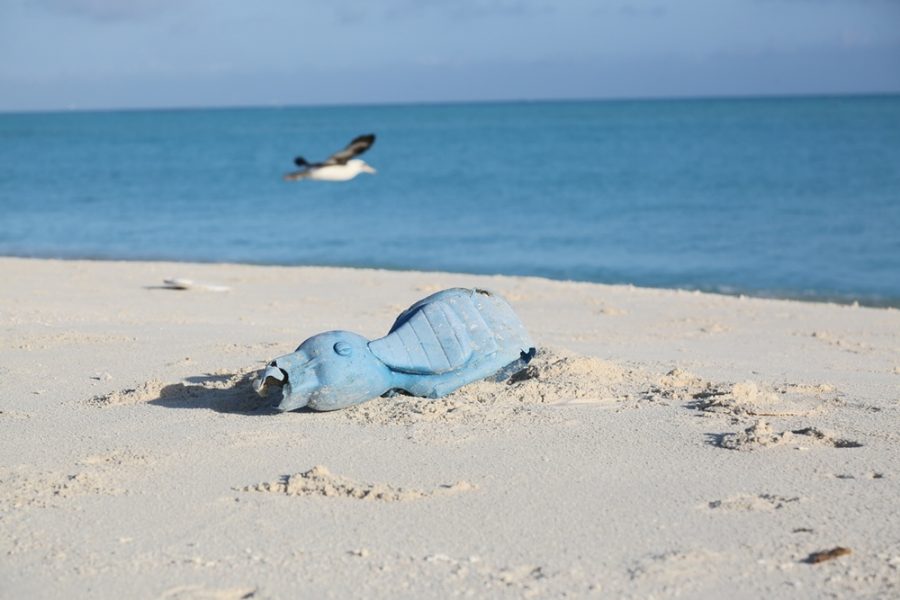 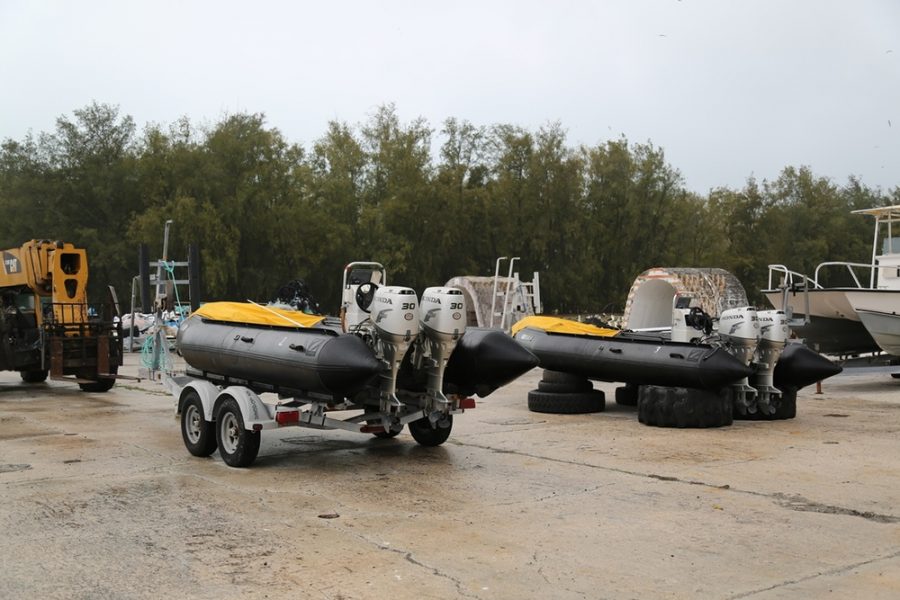 April 14, 2016 the team was able to finish building the two 17-foot Zodiac MKIV work boats, which will be used to remove debris from the northwestern Hawaiian Islands. 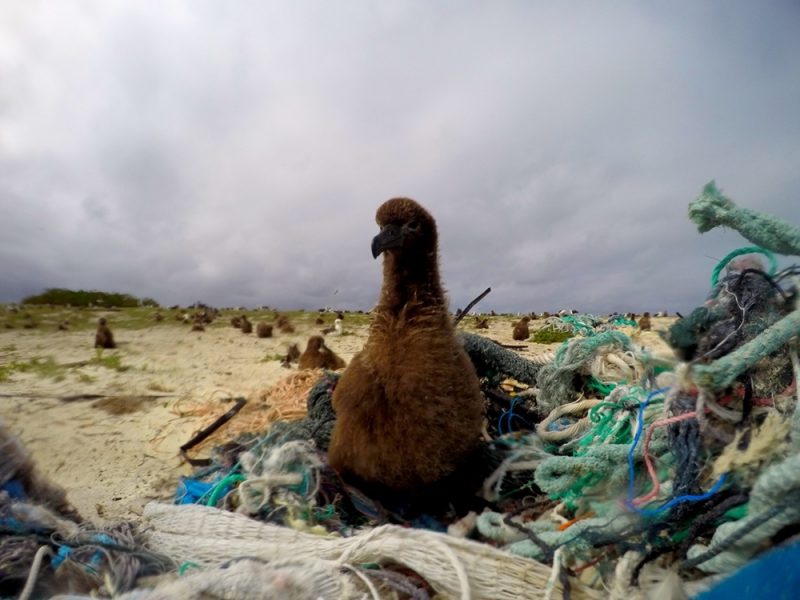 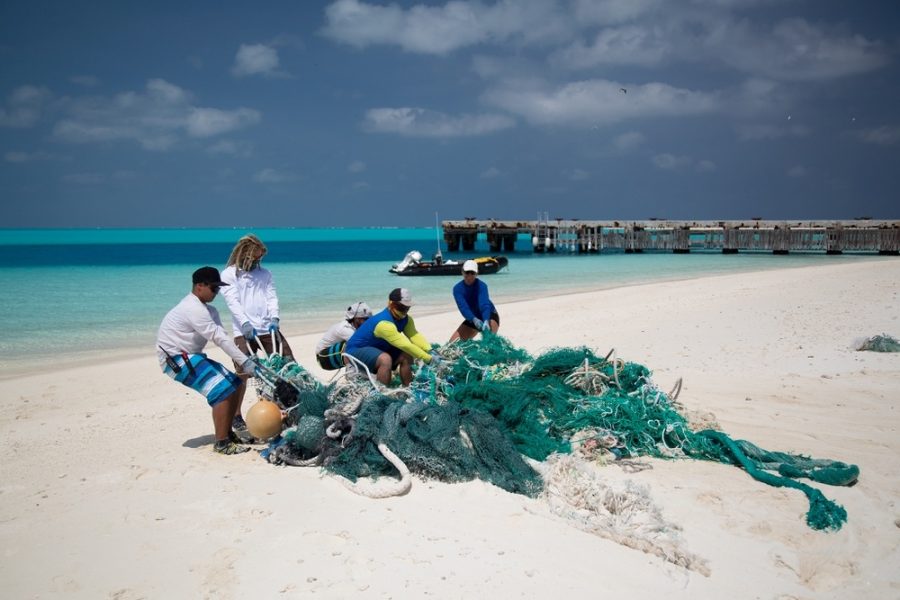 The team continued removing debris from the shorelines of Eastern Island on April 16, 2016. 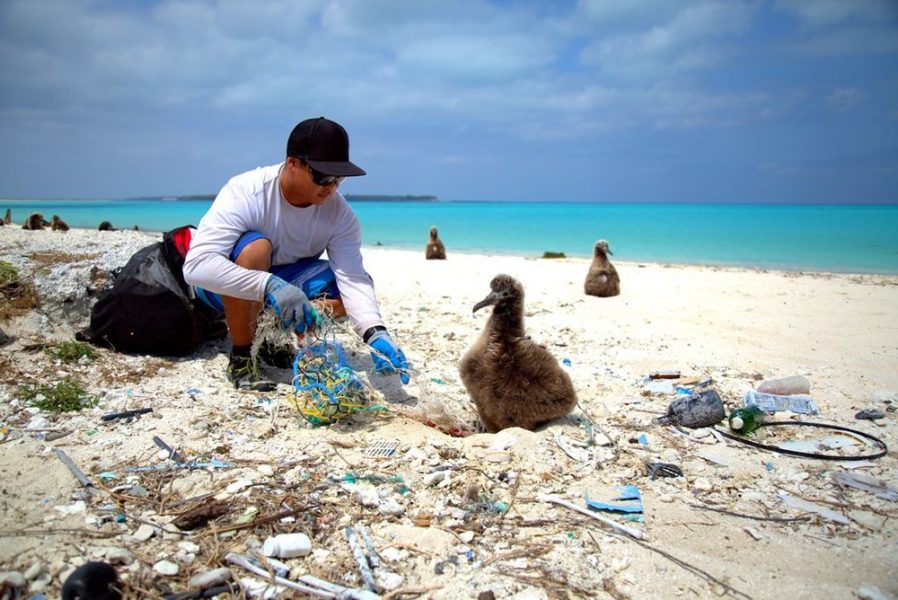 On April 17, 2016 a Marine Debris team member disentangled a Laysan albatross chick from a derelict fishing net and debris on the western shore of Eastern Island. 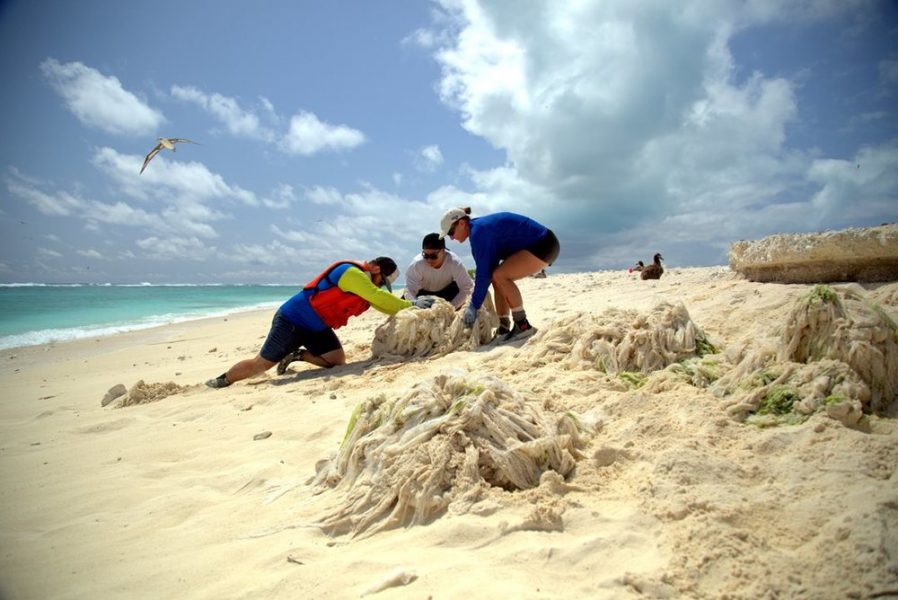 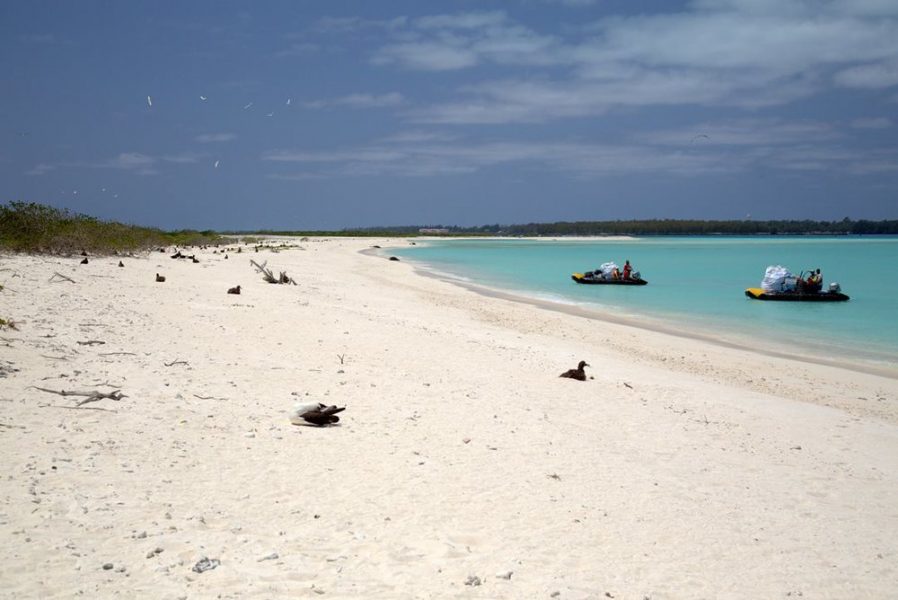 On April 19, 2016, the team removed debris from the western tip of Eastern Island, and both boats were fully loaded. 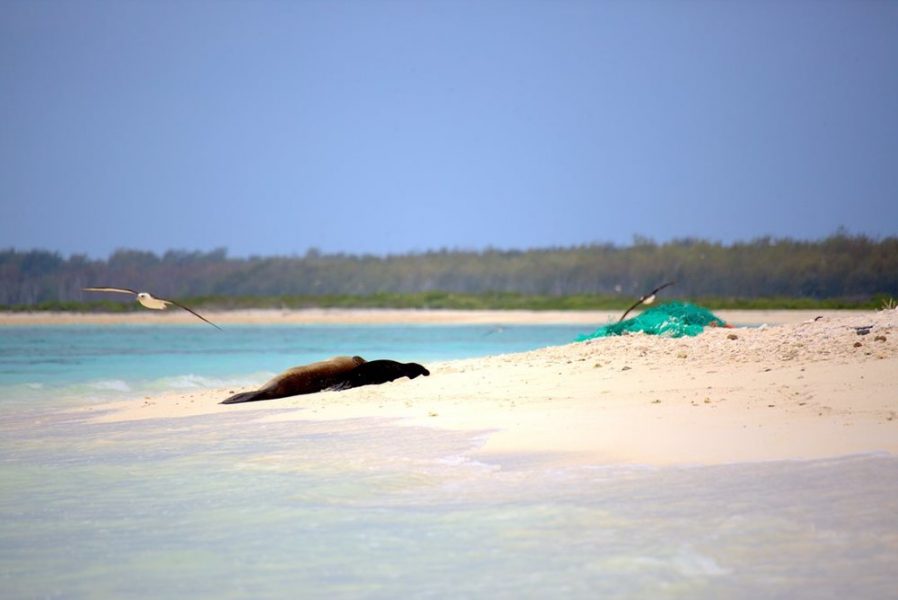 A mom and pup pair of Hawaiian monk seals was spotted lying next to a large derelict fishing net. 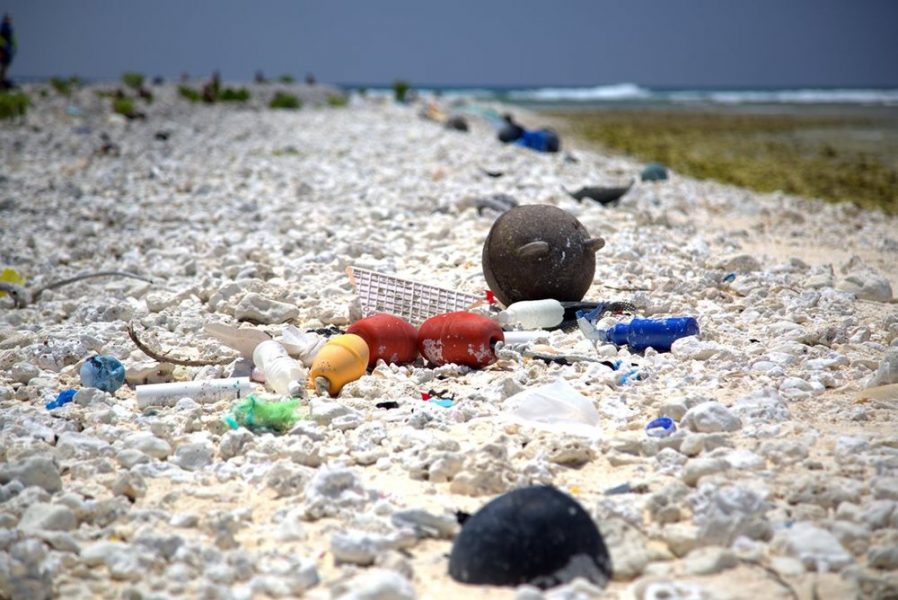 On April 12, 2016, the team moved operations from Eastern Island to Spit Island, the smallest of the three Midway Atolls. 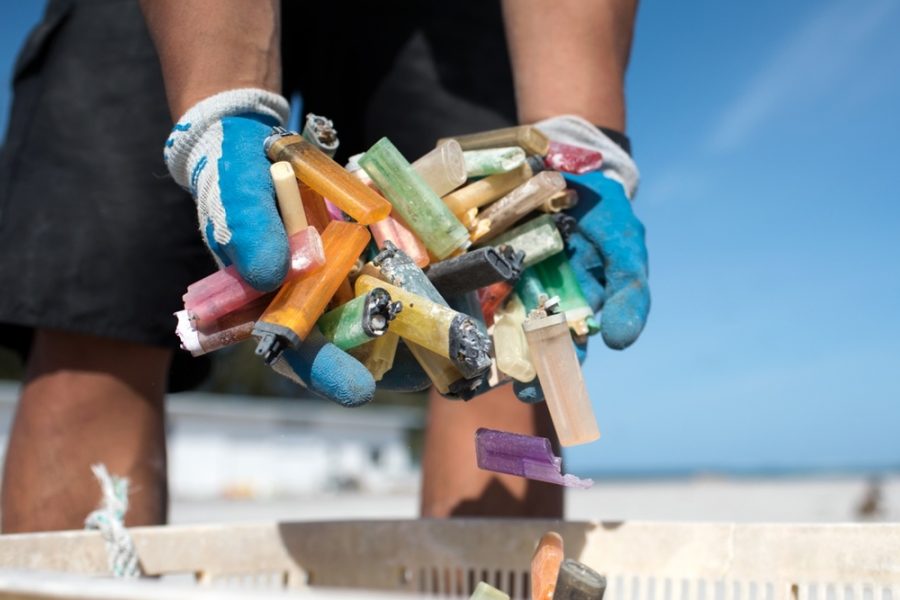 On April 23, 2016, the team sorted debris removed from the three atolls. Sixty percent of the 7,077 kg (15,602 lbs.) of debris collected has been sorted and tallied, and a total of 366 disposable lighters have been counted. 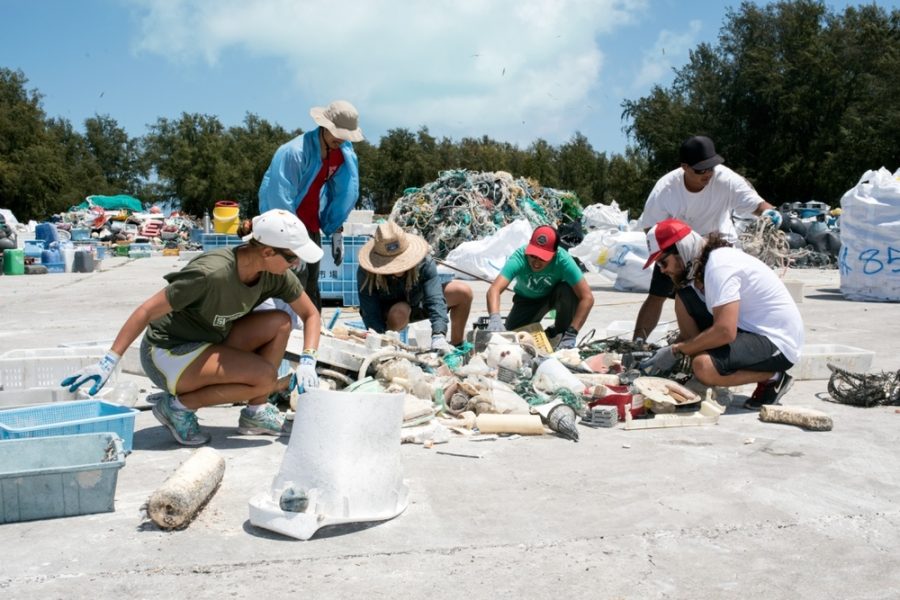 U.S. Fish and Wildlife Service vlunnteers help the debris team complete their sort of derelict fishing gear, plastics and other litter collected over the 8-day operation. 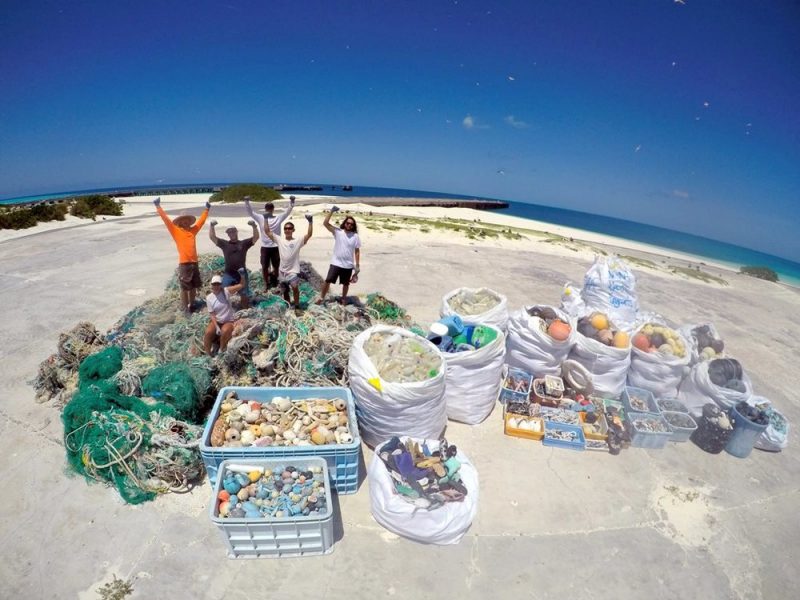 The debris team closes out removal efforts from Midway Atoll, where a total of 12,030 lbs. of derelict fishing nets and 8,000 lbs. of plastic were removed from shorelines. 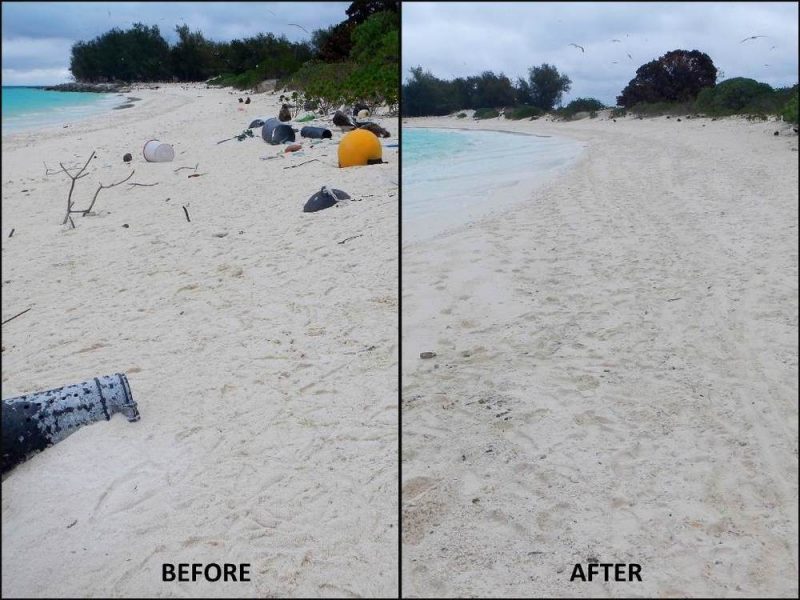 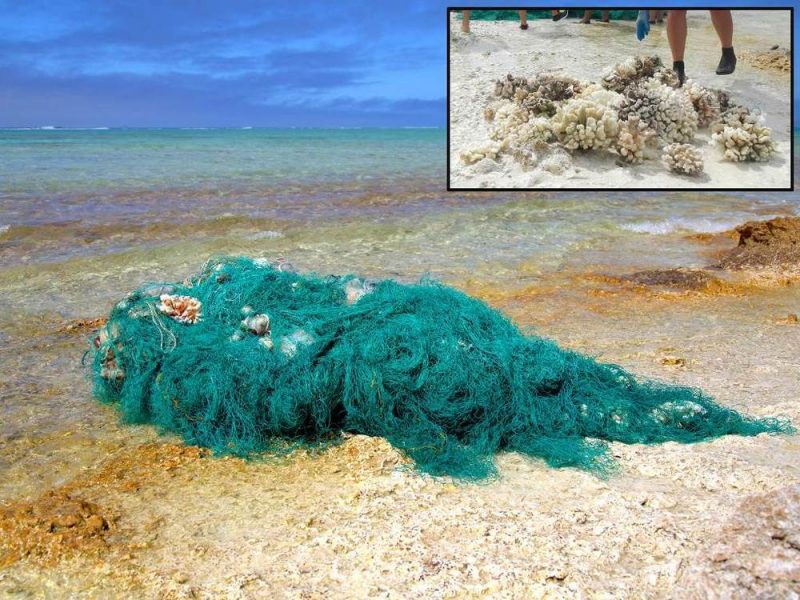 Fishing nets, lost from the decks of fishing vessels, drift through the ocean until they are caught on shallow coral reefs around islands and atolls. Once snagged, they smother the coral. Wave action and storms tear the nets away, breaking off portions of the reef. This net was removed from Seal-Kittery Island of Pearl and Hermes Atoll. 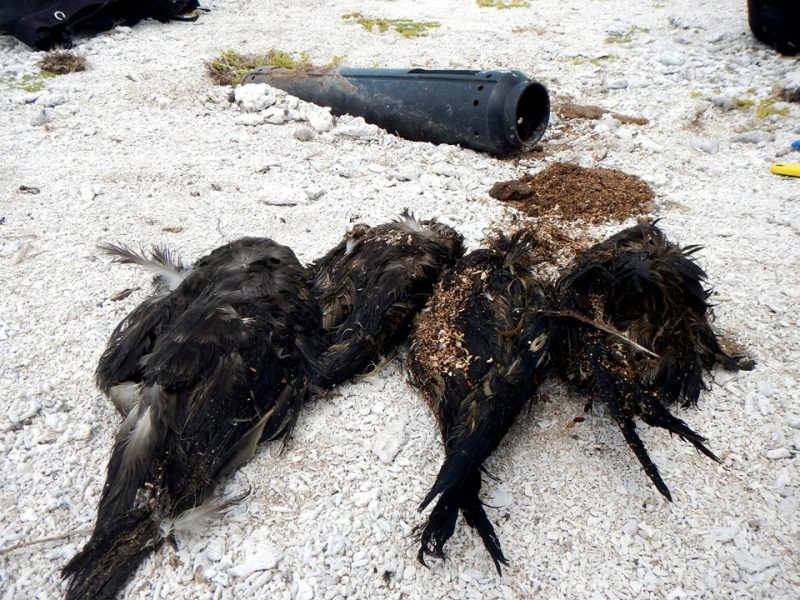 Four wedgetail shearwater birds died after becoming stuck in a hagfish cone trap. The Marine Debris Team was able to rescue a fifth bird. A single piece of marine debris can have a major impact on these remote places. 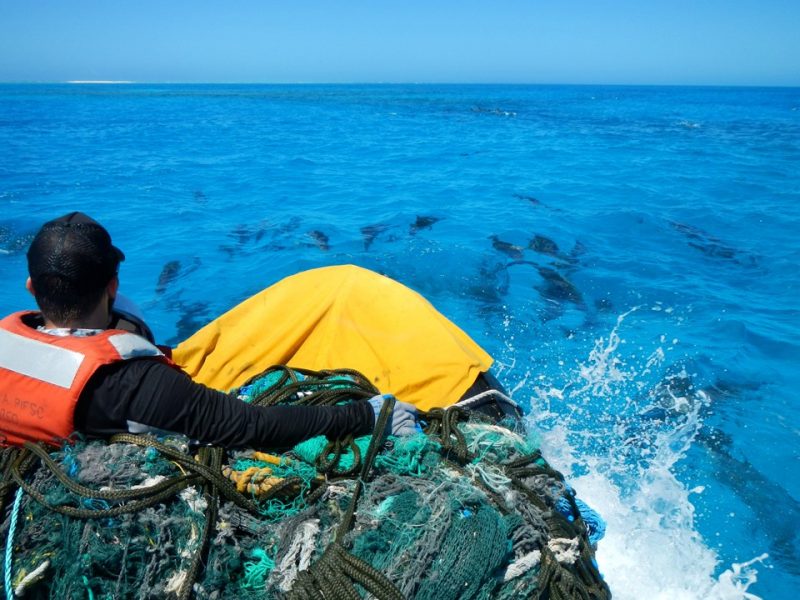 A pod of Spinner dolphins escorted the team during their 21 kilometer transit through the interior of Pearl and Hermes Atoll back to the NOAA ship. On May 3, the team completed operations after removing 2,100 lbs. of derelict fishing nets fro the shoreline of Southeast Island. 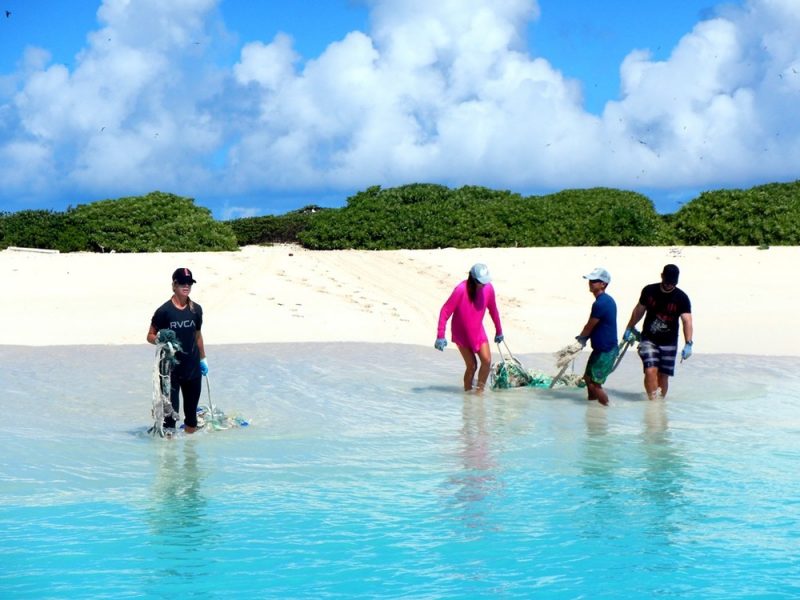 On May 4, 2016, the Marine Debris team was able to remove 2,500 lbs. of derelict fishing nets from the shoreline of Lisianski Island. 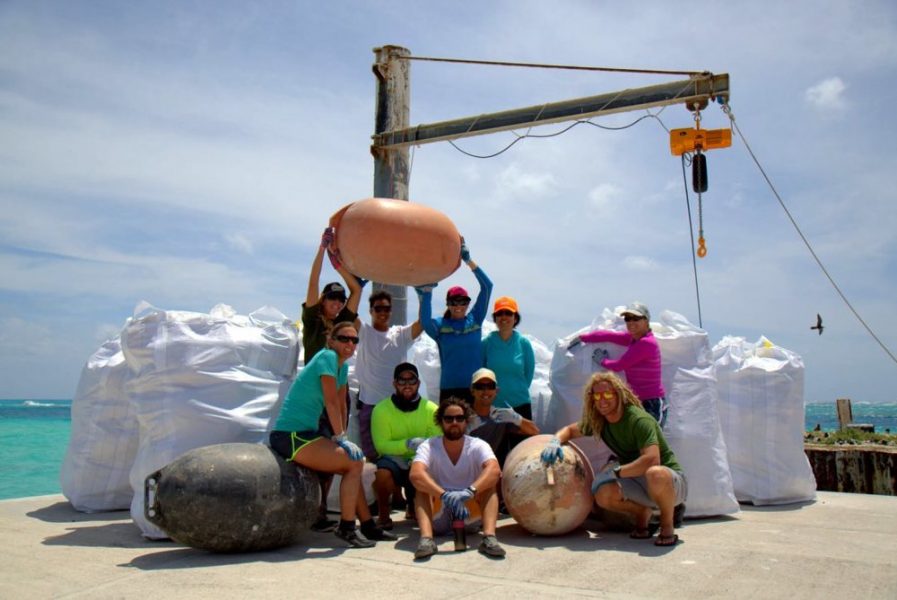 The Marine Debris team conducted operations on Tern Island of French Frigate Shoals on May 7, 2016. The team collected the debris off shorelines, contained in bagsters, and out of harm’s way for the wildlife.

We were greeted by Bonin Petrels flying in the night like shooting stars and were shuttled in stretch limo golf carts to our rooms. The following morning, a brilliant orange sunrise unveiled all that is Midway Atoll National Wildlife Refuge. The air was dense with the calls of millions of nesting seabirds; the fuzzy brown Laysan Albatross chicks were begging for food between the elaborate dances of the adult birds.

This year, Midway Atoll National Wildlife Refuge is one of the locations where the NOAA CREP has sent their marine debris team to remove tens of thousands of pounds of debris, funded by the NOAA Marine Debris Program and the NOAA Papahānaumokuākea Marine National Monument. Our first day began with a Laysan Albatross slalom course on bicycles. We dodged the chicks on the ground as swooping adults practiced their crash landing techniques.

RELATED: Midway Albatross an Icon of the Plastic Pollution Problem

As we arrived at the boat ramp, we found a cute monk seal snoozing, so we adjusted our plans and launched the boat in an alternate location. Being in a national wildlife refuge means we have to change our plans for the sleeping natives. Being so immersed with the local wildlife can have its perks though, and a large pod of spinner dolphins would occasionally play alongside our boat and escort us out of the harbor.

Upon arriving on the powdery white sand beaches, we found fishing nets, floats, and an assortment of plastics that had preceded our arrival. Our hearts sank as we painstakingly removed each piece of debris that had washed ashore on this remote island. Although our muscles ached and faces and lips got charred from the sun, our hearts lightened with each 50 pound bag and 500 pound net that was removed, knowing that we were fortunate enough to find and remove these wildlife entanglement hazards before more damage was caused.

Have you ever lost a shoe, an umbrella, or a baseball? Maybe a water bottle, swim fins, or even a bowling ball? They all float and can all end up on shorelines in faraway places. Midway is 1,300 miles from the nearest city (Honolulu) and has collected debris from across the globe. The most harmful debris are the fishing nets that wash up on the shorelines because they are great at catching monk seals, turtles, sea birds, and sharks. These indiscriminate killers can range from hand-sized fragments to behemoths weighing over 20,000 pounds!

During our eight days of marine debris removal on the beaches of Midway, we collected 15,206 pounds of debris. More than half of that weight was from derelict fishing gear. While the animals may not know why we are stealthily working around them, we are committed to our work, knowing that we can make a difference for the nesting seabirds and 1,300 critically endangered monk seals.

Last week we left Midway Atoll National Wildlife Refuge. Our next stops include various islands in the Northwestern Hawaiian Islands to continue our mission. We can all do our part and we hope we have inspired you to make a difference.

NOTE: This story originally appeared at NOAA’s Marine Debris Blog, and is reprinted with permission.

11 responses to “Midway Through Cleaning Up Midway Island”