Have you taken the Plastic Free Challenge?

Home » Culture » Have you taken the Plastic Free Challenge?

The plastic pollution problem affects all of us and people around the world need to come together to solve it. This is why I founded the Plastic Free Challenge one year ago. When I started this campaign I was determined to raise awareness and help tackle this problem, but I had never done anything quite like this and didn’t realize how hard it could be to get people to understand the serious threat we are facing and to take action. Fortunately I am inspired every day by the amazing work of my peers and the participation we see that fuels this campaign.

What is the Plastic Free Challenge?

The basic idea of the Plastic Free Challenge is actually borrowed from the ALS challenge that happened on social media some years ago, but rather than pouring a bucket of ice water over our heads we are making real changes in our daily lives to use less plastic and then we document and share our experience. We support each other as a community and inspire others who see our actions from our social media posts. The Plastic Free Challenge asks people to refuse disposable plastic and lead by example by promoting to their circle of friends on social media.

The goal is to raise awareness and create a demand for sustainable products and services. I am no scientist, marketing guru, millionaire, or super hero, I am a regular person like you, but as I began to read countless articles about plastic pollution, I became increasingly educated about the detrimental effects of plastic and knew I had to do something about it. I assembled a small team of volunteers and we hashed out different ideas. Our many challenges help people understand their personal impact and responsibility in regards to consumption and the power and influence of spending. 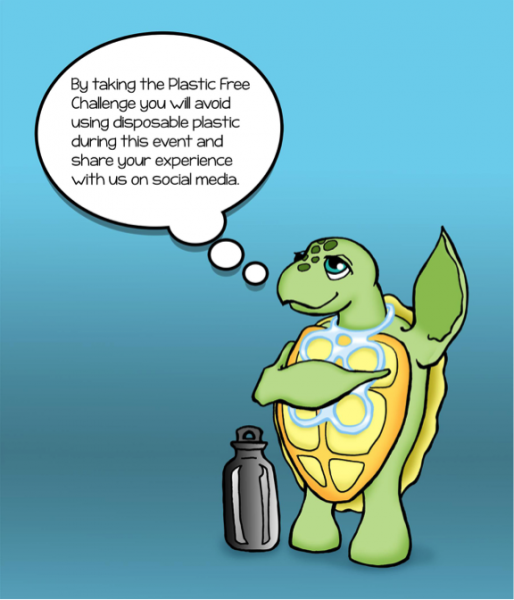 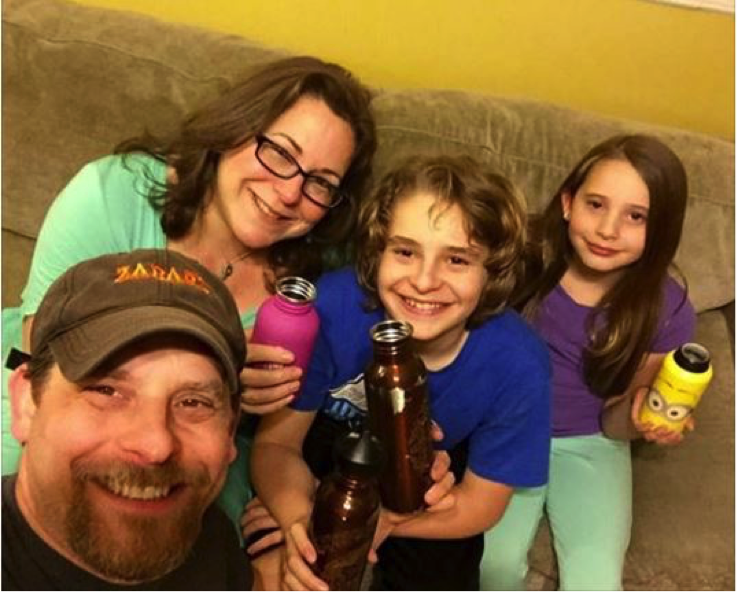 The Mogel family shows off their reusable bottles 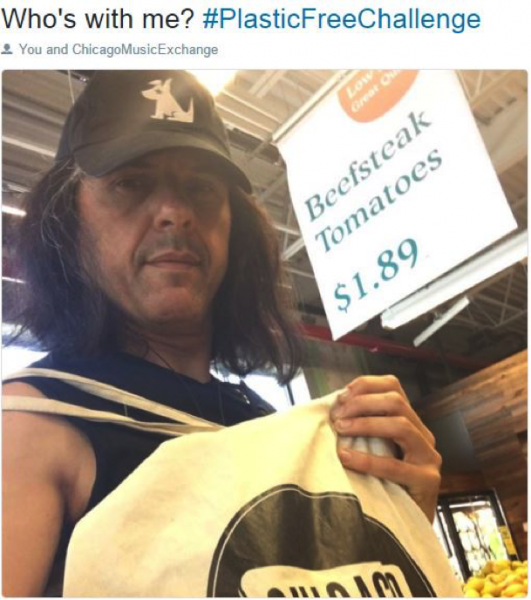 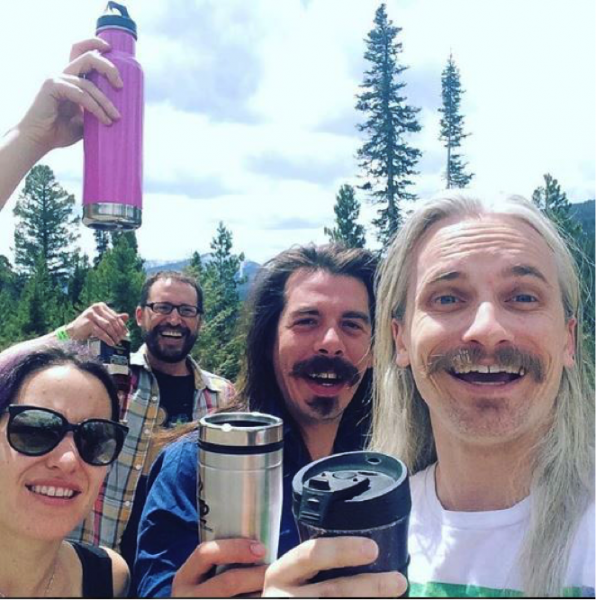 Megafauna are a participating rock band from Austin, Texas 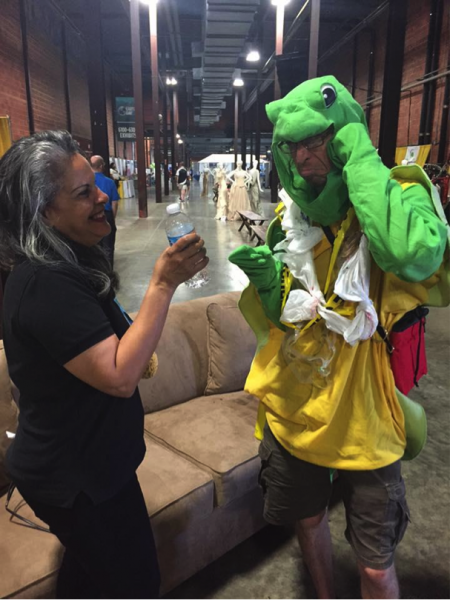 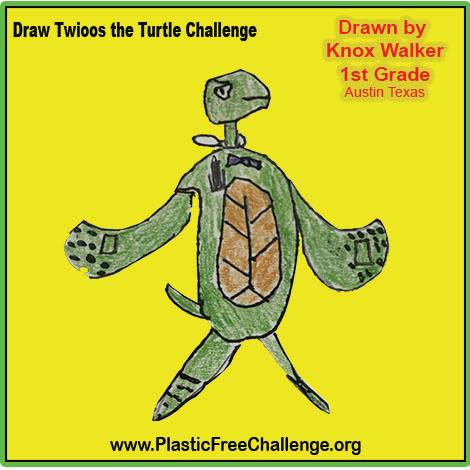 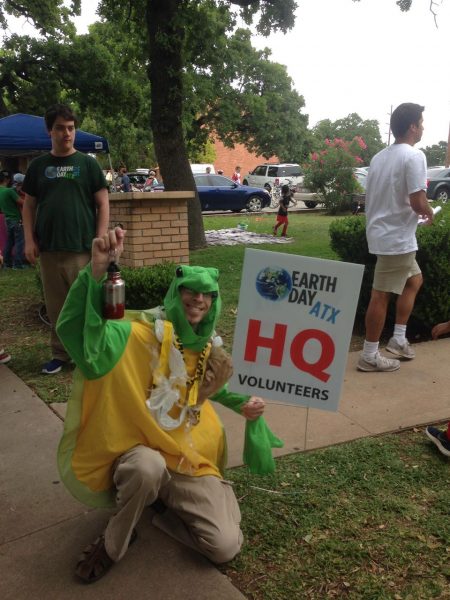 
How the Plastic Free Challenge Was Born

I am a musician turned eco-activist. A few years ago I watched a documentary on Netflix called “Tapped” about the bottled water industry and plastic pollution and I was feeling a strong sense of dread and frustration knowing that I was part of this immense problem. It became hard to accept the fact that every piece of plastic I used would pollute and poison our planet forever! I took a long cross country road trip in my minivan (in the U.S.) and while traveling, I was constantly getting food to go (take away). Every meal was served to me in Styrofoam containers with plastic silverware and excessive packaging, and it was really upsetting me.

One late night in rural Pennsylvania I pulled into an all-night diner along the highway and I decided to bring in my own plate rather than accept another Styrofoam clamshell. Admittedly, I was feeling a awkward, but I asked the waitresses if they would mind serving my food to me on my own plate because I didn’t want to create unnecessary trash. They thought it was a strange request for sure, but more entertaining and exciting than their normal truck driver requests. While I was waiting for my food, I explained to them that in certain parts, the world’s oceans have 6 times as much plastic in them as plankton (fish food) and that plastic pollution is overwhelming our landfills and infiltrating our food chain and water supplies causing numerous health problems. After hearing the facts, they were moved and supportive and actually treated me like a hero. I asked the waitress if she would mind posing for a photo holding up my plate with my meal. I proudly walked away with my late night meal. I then posted the photo to my personal Facebook page. The post received a lot of likes, comments, and attention.

I thought to myself, wow just by bringing in my own plate and posting the evidence to Facebook I had a huge impact. What if I could invite others to do the same? What if hundreds of people started publicly endorsing sustainability on social media? And that’s how the idea for the Plastic Free Challenge was born.

As I told people about this personal revelation they gave me feedback and a small team formed. We developed the Plastic Free Challenge website, Facebook page, Twitter and Instagram pages and different challenges and dates for them. Momentum was strong and we had the support of a lot of motivated people. As a musician I also wanted to involve creative people and so we developed some separate challenges for bands and musicians and artists as well.

The previous Halloween I had dressed up in a turtle costume but customized it by draping disposable plastic around my neck and I wore a sign with a few simple facts about plastic pollution.  While out on the town celebrating my favorite American holiday people were both amused and disturbed by my strangled turtle costume. As they engaged me in conversation I would tell them about the plastic pollution problem. The turtle character was a hit! We needed a logo for the PFC campaign and decided to develop a cartoon turtle named Twioos.

We developed the story for our endearing mascot Twioos the Turtle eco-superhero and had several volunteer artists draw him, providing us images that we were able to use in our homemade memes and posts. You can read the fun but fictitious story of Twioos the Turtle and participate in our Draw Twioos challenge at our website.

Every day I emailed and called various environmental organizations, bands, musicians and event promoters trying to build what I hoped would be a fun and creative viral social media campaign spreading the message about plastic pollution and the solutions to concerned people worldwide.

We developed six different challenges and I planned to promote each one for 3 weeks before starting a new one. I figured that each one would gain traction and take off and that momentum would carry into the next challenge. The Plastic Free Challenge campaign started on Earth Day weekend April 22, 2016 and our first Easy Action Mini-Challenge entitled the “Water Bottle Selfie” began on May 1.  In the three weeks of promoting this challenge we had fantastic results!  People and even bands (music groups) from around the world posted photos on social media ranging from serious to hilarious and quirky.

Check out our gallery of Water Bottle Selfies from the 2016 challenge at our website and you can expect and take part in the new water bottle selfie campaign (now using the tag #RefillRevolution) in June 2017.

Our second mini challenge asked people to bring their own reusable shopping bags and provide evidence in the form of a sustainable selfie. We used the hashtag #PlasticFreeChallenge and #BYObag with each post and had good participation with this one as well.

But with every challenge, instead of seeing the number of people involved growing, we saw a decline. This was frustrating but in retrospect I understand why. Three weeks just wasn’t enough time for each challenge to take root. Changing personal habits like refusing plastic, something that is so ingrained in our everyday life, is very difficult and takes time for people to learn and implement in their lives. People need to be reminded many times and learn what alternatives they have to using disposable plastic.

And because we had one mini-challenge campaign scheduled right after the other, I found myself working day and night chasing after people so I would have content to post. I began to feel like a pest. This was supposed to be fun! The burnout that many had warned me about was beginning to hit me. I thought, if I could get more influential people and organizations with a larger reach involved, the PFC could take off. So I emailed and reached out to larger organizations once again. But they were all quite busy with their own worthy agendas. I had tried to do too much too fast and now I was feeling the consequences.

But then suddenly a musician that had been promising to get me a selfie and hadn’t, would unexpectedly come through, or I would receive positive feedback and gratitude from people saying that they are making real changes in their lives. And these nice surprises lifted me up and renewed my motivation. Hearing that mothers started packing lunches in reusable containers rather than disposable sandwich bags, or seeing posts from people proudly showing off when they remembered to bring their own containers, bags and bottles or refuse a straw, these things inspired me. And that is the power of our community and this movement. We inspire one another.

I had enormous goals and was often falling short of them, but these little victories counted and I tried to turn my focus and attention to them. Steven Mogel, our attorney from Monticello NY and his family participated in several of our 2016 mini-challenges and he later told me that “participation in the #PlasticFreeChallenge reminded us to bring our own bags and bottles and to refuse plastic straws and to use less plastic overall, and we all felt a renewed sense of responsibility and pride as a result. We feel really good about the changes our family has made.”

I realized that while I may not be able to force a viral campaign and awaken the entire world to the joy and pride of eco-activism (at least not in a few months), I could create positive changes in my life and help the people that engage in our humble campaign to do the same.

And also as a result when you stop eating pre-packed foods wrapped in plastic and you start preparing ahead, you suddenly realize that you are now eating healthier, saving money, protecting the environment and feeling better about yourself in general. If I can influence even a small number of people to use less plastic and learn alternatives, ultimately that is what the Plastic Free Challenge is about. We lead by example and endorse sustainability to our circle of friends. And the really good news is that our movement is growing because we are acting for the benefit of everyone. All of us are able to influence the world around us, and when we come together we are exponentially stronger. Join us and be the change you want to see in the world. Take the Plastic Free Challenge!