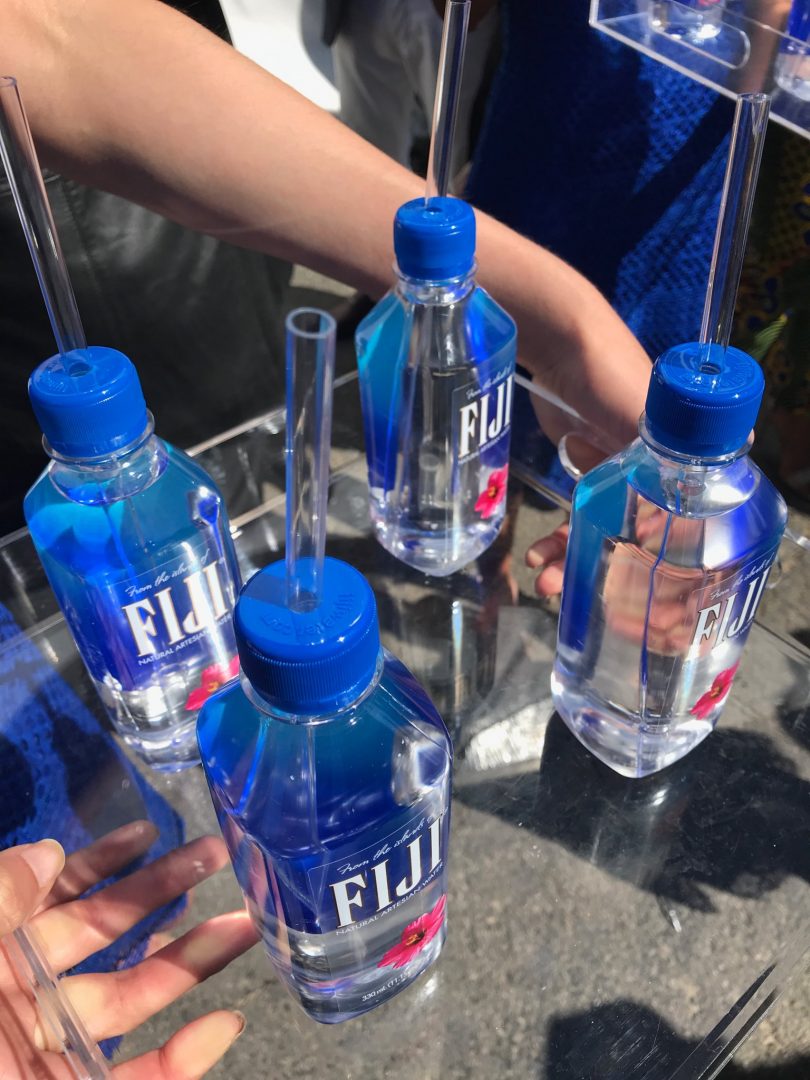 Product Placement is an industry in Hollywood with companies vying to get their goods on the screen and in photos with stars. The tobacco industry actively promoted smoking through association with stars by supplying stars with cigarettes and making deals to get the brand on screen, although the dangers of this form of advertising has led to some restrictions on placement in films for youth.

But will Hollywood recognize the harms of single-use plastic on human health and the environment and cut the deals with purveyors of throw away plastics? This Oscar weekend showed a very disappointing failure to grasp the zeitgeist in California where plastic pollution is a hot issue in the legislature and in media.

The Spirit Awards are known as the “cool” Oscars– a laid back affair at the beach the Saturday before the Oscars where independent films get “Spirit Awards” for the same categories. More often these days with excellence coming from outside the studio system, most of the films and the stars are the same group that will be celebrated the following day at the Oscars.

The large tent for the Spirit Awards is in the parking lot of the Santa Monica Pier, right next door to the Santa Monica Pier Aquarium. This aquarium, operated by local ocean nonprofit Heal the Bay, is unique because every creature housed there is local, making it a great teaching tool for environmental activists working to protect the Santa Monica Bay as habitat.

Known as the center of the film industry, California is also leading the nation in creating policy solutions to plastic pollution. California is the first state to pass a statewide ban on plastic bags, thanks to activism led by groups including Heal the Bay. Heal the Bay was drawn naturally to plastic pollution policy from its regular beach cleanups and leadership on Coastal Cleanup Day, the single largest volunteer environmental event on the planet each year. Coastal Cleanup Day not only cleans the beach of plastic pollution, but produces a scientific analysis of the items collected each year as well as a Top 10 Items Found.

California recently made U.S. national news by introducing a Straws Upon Request bill (AB 1884) that calls on dine-in restaurants to enact a straws-upon-request policy “to create awareness around the issue of one-time use plastic straws and its detrimental effects on our landfills, waterways, and oceans,” said the bill’s author, Majority Leader Ian Calderon.

Plastic pollution on the beach is more than just an eyesore on tourist dependent beaches. Scientific studies have shown that plastics break down into micro plastics in the aquatic environment and have entered our food chain. Plastic pollution is also killing the ocean creatures on display at the Santa Monica Pier Aquarium– sea birds and turtles who mistake bits of plastic as food are suffering greatly.

Plastic bottles and straws are top offenders on the beach and are consistently among the Top 10 Items Found on Coastal Cleanup Day. Many campaigns have developed to discourage single-use straw use– including PPC’s project The Last Plastic Straw, founded by Jackie Nuñez, and Strawless Ocean with actor and activist Adrian Grenier.

At the same time, environmental groups are seeking to popularize tap water as the most sustainable way to stay hydrated. WeTap, a nonprofit organization, has a free app to locate and rate water fountains. And the best restaurants are offering filtered flat and sparkling water free of charge to guests in response to the trend away from bottled water.

Apparently Film Independent, creators of the Spirit Awards, did not get the memo on plastic pollution when choosing Fiji water as a sponsor. Not only were Fiji Water Bottles placed at the door to the tent, but this year the bottles were double offenders with plastic straws inserted through the lids.

While companies like Fiji Water that take precious local water from far away, bottle it in plastic and ship it around the globe, may argue that their containers are recyclable, the fact is that most of these bottles won’t get recycled. China is so overburdened with America’s plastic waste that they are no longer accepting it for recycling and the cheap cost of virgin petrochemicals here in America thanks especially to fracking makes recycling plastic less attractive.

If plastic does get repurposed, it’s generally down cycled into fill or fluff and doesn’t return as a bottle, hence the continual manufacture of single-use plastic containers. Almost all the plastic produced is still with us in some form. Scientists tell us that by the year 2050 there will be more plastic than fish by weight in our oceans.

Which is why at least one attendee to the Spirit Awards this year was shocked to see the Fiji water giveaway with plastic straws. Here is the tweet:

Perhaps next year the Spirit Awards will catch the wave of change and give out beautiful, reusable bottles and straws.

Lisa Kaas Boyle is an an environmental attorney, mother, and activist, and a co-founder of Plastic Pollution Coalition.

Get the tools to ask your local eateries to change their straw protocols.