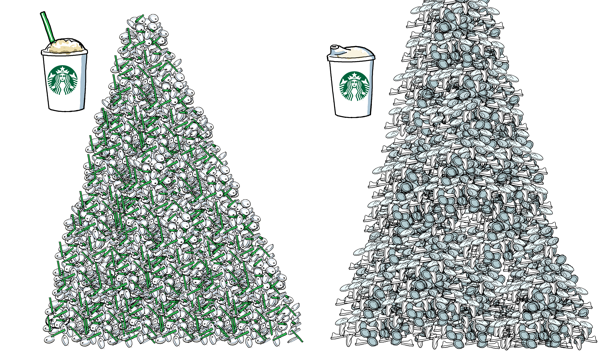 Cartoonists React to the Starbucks Announcement

Earlier this month, when Starbucks announced a global phase out of plastic straws, environmentalists and activists praised Starbucks’ efforts to cut back on single-use plastic. Plastic straws are not recycled, may harm wildlife, and consistently make the Top Ten list of items found on the beach, according to International Coastal Cleanup data.

Starbucks has started the process of switching from the traditional plastic cup and green straw combo to a strawless lid, quickly dubbed by the public as an “adult sippy cup.”

While no longer serving plastic straws in every drink is a good start, Plastic Pollution Coalition notable members and cartoonists are reacting to the idea of the single-use plastic “adult sippy cup” and the critical need to stop using so many plastic cups in the first place.

“While this move is a step in the right direction,” says Jackie Nuñez, founder of The Last Plastic Straw (a project of Plastic Pollution Coalition), “We challenge Starbucks to take the next step by promoting branded reusable cups, straws, and cutlery. This would show social and environmental responsibility, increase profits, save money, and generate less waste.”

What do YOU think? Tell us in the comments section.

4 responses to “Cartoonists React to the Starbucks Announcement”