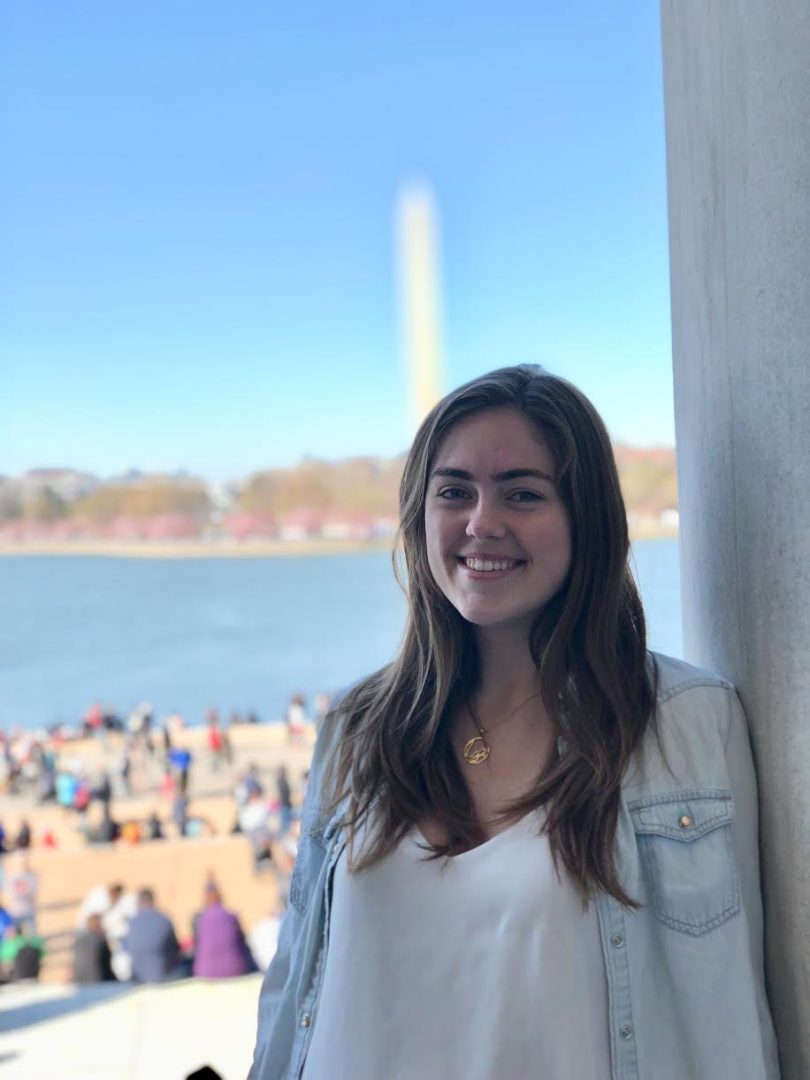 Being a global citizen led me to the plastic pollution movement

Unlike many, I am not in the plastic pollution movement because of a love for the ocean. Though I did grow up beachfront in Abu Dhabi, UAE, I am motivated through personal accountability.

I began to feel accountable for my actions when I was 13. That is when I attended my first Global Issues Conference and learned that the global economy exploits vulnerable communities and risks future generations on this planet. I was forced to look at my own life critically and ask which global issues do I contribute to? Most prominently we were introduced to climate change, an increase in global temperature due to our current source of energy, fossil fuels. I looked into how I use fossil fuels in my own life which starts in a car being driven to school and ends with me being driven back home from school or the mall.

Like most middle schoolers, life comprised of sports practice and hanging out at the mall with my friends to shop and eat. I felt pretty innocent because it was under my parents control whether they drive me to school. I left that conference thinking climate change and environmental degradation was completely the blame of fossil fuel corporations.

I carried this blame into a middle school Green Team meeting about a month later. Before we began, my peers and I were chatting away about the big bad oil companies threatening our future. When my teacher walked in, she told us to quiet down and focused our attention toward the board. She began to play a YouTube video that would change the room’s tone within its first 10 seconds.

The narrator introduces the Story of Bottled Water by saying, “This is a story of a world obsessed with stuff, it’s a story about a system in crisis. We’re trashing the planet, we’re trashing each other, and we’re not even having fun.” Then, Annie Leonard from Greenpeace comes into the frame holding a Fiji water bottle and says, “One of the problems with trying to use less stuff is sometimes we think we really need it.”

In the next 8 minutes my world view is completely turned upside down. I had no idea that the products I consumed also used fossil fuel energy.

Leonard says: “The problem starts here with extraction, where oil is used to make water bottles. Each year making the plastic water bottles used in the U.S. takes enough oil and energy to fuel a million cars. All that energy to make the bottle, even more to ship it, and then we drink it in about two minutes.”

I look down at my hand, clutching a half empty bottle of Al-Ain water that I bought 10 minutes ago. Suddenly it becomes clear that I voluntarily implicated myself in the fossil fuel economy. The comments I made about my blamelessness 30 seconds ago seem so naive. I watched the rest of the video going through a roller coaster of emotions.

Before I feel so disparaged, the narrator finishes the story on an upbeat note that inspires me to redeem myself. Among the tangible next steps she recommends I take, the one that sticks with me is ban the purchase of bottled water at my school.

I think to myself, if I explained to my peers that bottled water is a waste of money and we install more water dispensers on campus, all 1000 of us could go without. A ban would just reflect our rejection of fossil fueled habit that is totally unnecessary, unhealthy, and unsustainable. I think back to the memories of the Global Issues Conference earlier that year when a 16 year old boy presented his environmental campaign to rid the city Abu Dhabi of plastic bags. I knew that a young person can rally a community. I knew that a young person could change the status quo. The best way, I realized, was to start with myself.

So, I spent the next year kicking my habit of buying bottled water at school, at home, at sports practice, and at the mall. By the time the Global Issues Conference 2012 came around, I truly internalized a sense of personal accountability for my impact. So when we discussed ‘faraway’ global issues like poverty and climate change I considered how I was implicated in perpetuating this status quo. When I took a critical look into my daily life I considered the food I ate, the stores the clothes I wear, the products I use to brush my teeth, the technological gadgets I played on, the computer I typed on, the plastic cup I drank a frappuccino out of.  I thought of how these things were made, who made them, how far they traveled, how long I used them for, and in whose community it would end up in.

It became clear that I lived consumerist lifestyle powered by fossil fuels, fed with imported food, hydrated with desalinated water and driven by gas guzzling cars. The most useless habit I blindly took part in was single-use plastic bottles, utensils, bowls, and packaging. My plastic addiction was a perfect example of my consumerism and fossil fuel dependence. Two things that cannot continue for a sustainable world with 7 billion people and rising.

I thought if all my peers and I could kick this habit of single use plastic, maybe we would be open to a larger transformation where we reject a materials economy driven by manufactured demand. That is when I came up with my idea for Boot the Bottle, a campaign advocating for people in the developed world to not be dependent on bottled water as their drinking source but rather using a reusable bottle and a water dispenser. But, I did not tell anyone about it for another two years. Although, in that time I let the idea mature, I created a logo and developed a website. Finally, by 2013, the summer before 10th grade, I felt ready.

I emailed my school’s service coordinator a few days before school started to briefly explain my hope to ban the purchase of bottled water on campus. She responded with, “Yes I LOVE this idea” and immediately all that self-doubt I carried disappeared.

I realized that my self doubt was irrational. It was a mental manipulation put on me by society in the same way bottled water companies convinced me to make the irrational decision to buy their product every day. At the age of 15 I learned how malleable human behavior is. Society’s preconceived notions that youth are powerless and that consumer behavior reflects consumer demand were concepts that only served the interests of corporations benefiting from the status quo.

At that moment I fully embraced the message of the three Global Issues Conferences I attended: youth have the agency and responsibility to challenge the status quo for a just and sustainable global society. I also decided I would not limit my notion of achievement by what other youth have achieved.

Why I Engage in the Movements for Climate Justice – This two year long journey in self awareness was a transition from sheltered child to a global citizen ready for social change. It instilled in me a sense of social responsibility to recognize my social and ecological impact on the world and work within my sphere of influence to minimize my footprint. I tell the story of my internal transformation through the video above.

As soon as school started I gathered the leadership of the high school Green Team and pitched my idea. Within 6 months the campaign Boot the Bottle became an official part of my high school’s Green Team; the Superintendent agreed to ban the selling of bottled water from our canteen and cafeteria and install more water dispensers; all 1000 students began bringing reusable bottles to school. In March 2014, I decided to share this campaign with more people.

I delivered a TedxYouth talk with a takeaway message that “Booting the bottle will do good for everyone. For us [consumers] it will reduce our monetary loss, reduce our health damage, and for others, it will reduce our carbon footprint and reduce our negative impact on innocent people across the world. Every time you do not buy a plastic water bottle, you are supporting the world’s future.”

After all students and teachers made the switch, I realized we had excluded a group. The janitors and security guards. These are the folks that stay on campus until late night, cleaning, and protecting our campus. Then they are bussed to a crowded company accommodation on the outskirts of the city. This is when they call their family back home in India, Pakistan, Bangladesh, Sri Lanka, Nepal, Uganda, or the Philippines. They send most of their income home as remittances to support their family. WIth what is left, they spend on food, water, and basic necessities.

Shockingly, 20 percent of their income was being spent on drinking water. Each day they took a taxi (the only transportation that far out) to a corner store ten minutes away from their accommodation to buy jugs of bottled water. Their housing did not have filtered water, only tap. This was both a public health and financial concern because restricted access to affordable drinking water is dangerous in the deadly heat of the desert, especially those doing laborious work outdoors.

As I explained in the Talk, the developed world’s plastic dependency is a social justice issue. It makes cities and people pay a high price for what should be free, threatens communities health and contributes to greenhouse gas emissions in its production, transportation and disposal. Yes, the UAE is a developing country, but it has enough wealth to provide filtered water to everyone.

So, we started the EcoCitizen: Water Project to reduce migrant labor workers’ dependence on bottled water in the UAE by creating systemic access to refillable water and carrier solutions. We did so by installing water dispensers, providing reusable bottles and hosting Eco-Citizen Workshops at housing accommodations.

This made me realize that water is a political statement; who gets access to it, who can afford it, and who owns it speaks to the status of a society. The four year water crisis in Flint, Michigan is a prime example of how drinking water infrastructure is neglected and under funded in places with lower social status. Two hours away in Evart Michigan, the Nestlé corporation pumps 130 million gallons of water for a pathetic price of $200 flat, which it then sells back to Michigan residents at 2000x times the cost of tap water.  Interestingly enough, the CEO of Nestlé does not believe water should be a public right.  This goes against the United Nations declaration that clean drinking water is a human right.

If you are a young person who wants to make your community or school plastic free, contact me for any advice at bootthebottle@gmail.com. If you are in the United Arab Emirates or Switzerland, become a DropIt Youth ambassador! You will be joining a community of young people who are making changes in their community.