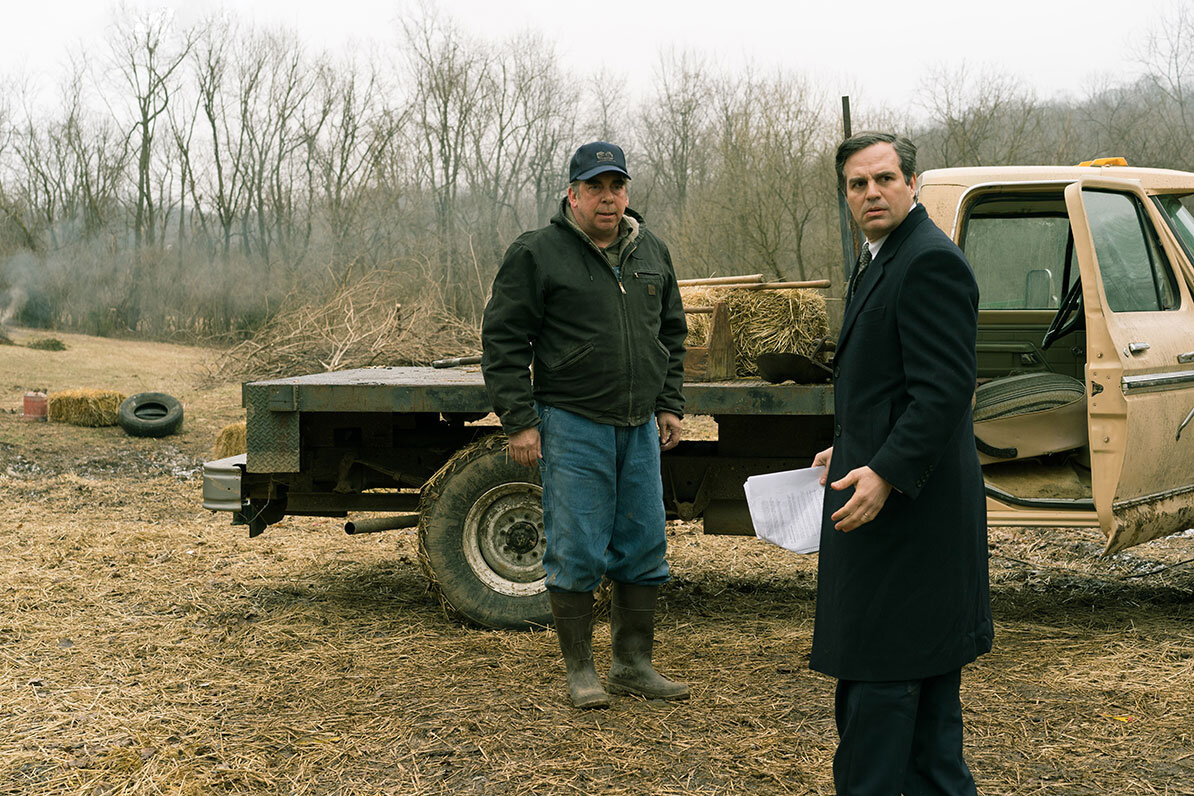 The film demonstrates how one individual can stand up and win a major victory for the people. Robert Bilott joins the advocates Norma Rae,  a labor organizer who worked to correct dangerous working conditions in a Southern textile factory, and Erin Brockovich who fought against Pacific Gas and Electric (PG&E) for the alleged contamination of drinking water in a southern California town.

Bilott, like Rae and Brockovich, is a most unlikely whistleblower who fought and won a groundbreaking environmental case against the chemical and plastic company Dupont at one of their locations in West Virginia.  Bilott came out of a conservative corporate legal firm in Cincinnati, OH and defending large companies like DuPont, known to put profits above the known harm its chemicals were causing.

In 1998, Wilbur Tennant, a cattle rancher whose cattle were dying, approached Bilott to ask why and to Investigate. DuPont had bought land adjacent to Tennant’s farm for a non-hazardous landfill. Soon, a stream his cows drank from started to run smelly and black, with a layer of foam floating on the surface. Within a few years, hundreds of Tennant’s cattle had died.

Dedicated time and research led to Bilott’s discovery that PFOA —perfluorooctanoic acid – was one of tens of thousands of unregulated industrial substances manufactured and used by American companies without any significant oversight by environmental or health authorities. 3M had pulled a similar perfluorinated compound, called PFOS, from the market. With this knowledge, Bilott asked for all of DuPont’s documentation pertaining to PFOA and discovered that some DuPont employees were very well aware that this chemical had seeped into local water. It had data from years back and knew about the harmful health effects.

DuPont quickly settled the Tennant case for an undisclosed sum but Bilott realized then that the entire water district had been contaminated. He filed a class-action suit on behalf of all the 80,000 people who lived or worked in six public water systems near the DuPont plant in Parkersburg.

Why would a corporation knowingly let a toxic chemicals seep into the ground and the water beyond its facility?

See the film and take note of another environmental hero who’s currently speaking out – Linda Birnbaum, former director of the National Institute of Environmental Health Sciences (NIEHS) and the National Toxicology Program.

While she was leading the NIEHS, a division of the National Institutes of Health, whose mission is “to discover how the environment affects people, in order to promote healthier lives,” Birnbaum was not allowed to use the word “cause” when referring to the health effects from PFAS or other chemicals.  “I was banned from doing it,” said Birnbaum. “I had to use ‘association’ all the time.” This is what she says publicly today, “The widespread environmental contaminants known as PFAS cause multiple health problems in people.”

Targeted since 2012 by Republicans, she has continued to fund and get relevant science out to the public on the health dangers of these persistent chemicals.  To read more on her work and being targeted, click here.

PFAS and PFOA are fluorinated organic compounds that are part of larger group of compounds known as perfluoroalkyl substances (PFAS).  These are the same class of chemicals that Robert Bilott began fighting more than 20 years ago.

CIEL Plastic & Health: The Hidden Costs of a Plastic Planet

If you have stories to share about environmental heroes leading whistle blower fights with their vigilance, persistence, and courage, please share them with us.

One response to “‘Dark Waters’ of Environmental Pollutants and Plastic Pollution”