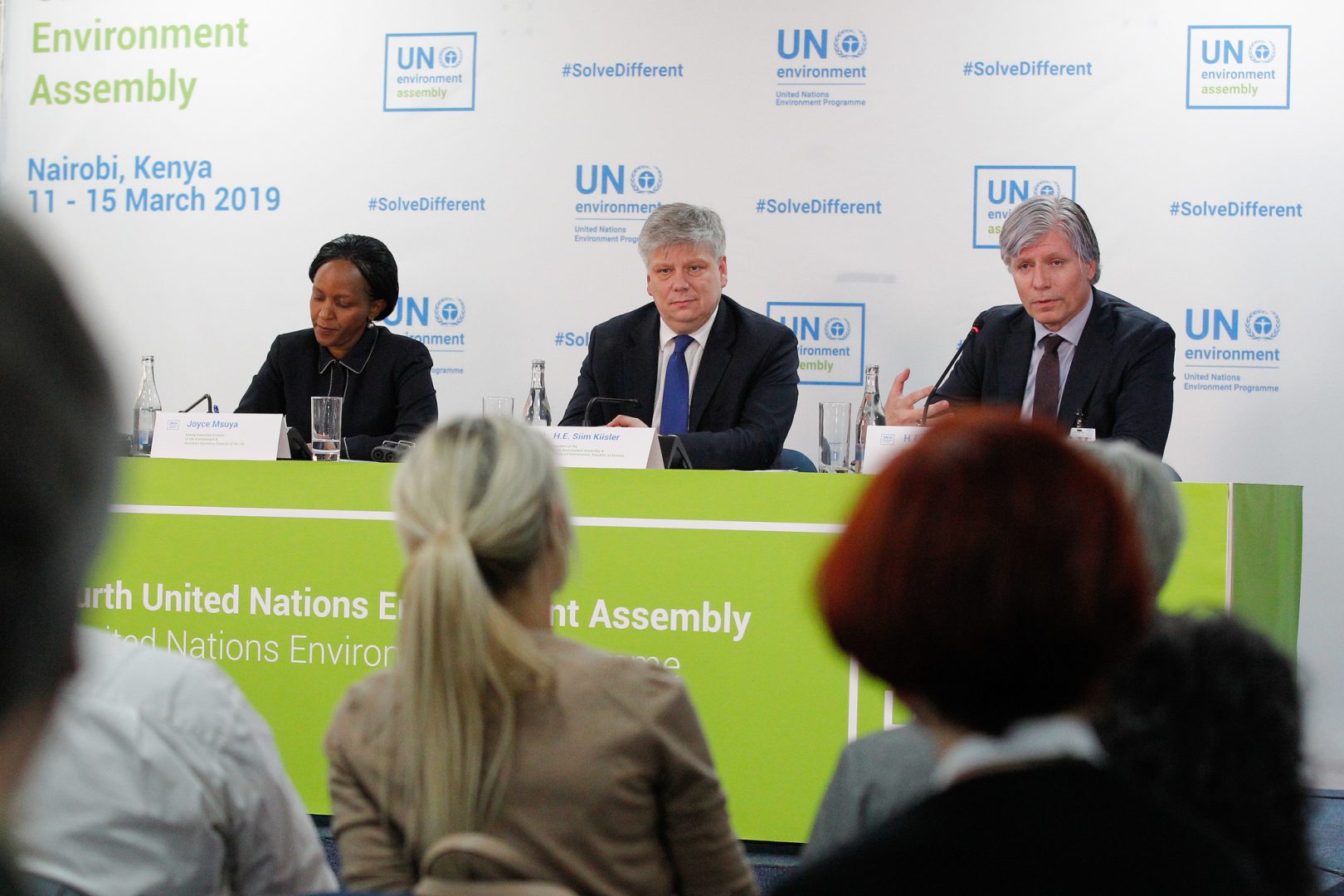 UNEA-4 Agreement Does Not Deliver at Scale and Urgency Needed

Nairobi, Kenya – At the 4th session of the United Nations Environment Assembly (UNEA-4), member states of the UN Environment Programme failed to meet expectations to confront the ever-growing plastic-pollution crisis threatening our waterways, ecosystems, and health.

Despite sweeping agreement by the majority of countries that urgent, ambitious, and global action is needed to address plastic across its lifecycle – from production to use to disposal – a small minority led by the United States (US) blocked ambitious text and delayed negotiations. Backed by a strong industry lobby with over $200 billion invested in petrochemical buildout to drastically expand plastic production, the US delegation was able to thwart progress and water down the resolutions, actions that were strongly opposed by many countries, including those most affected by plastic pollution, such as the Pacific Island States, the Philippines, Malaysia, and Senegal. Action-oriented member states did secure, however, the basic elements that will allow the building of future actions, based on the common vision that emerged among the vast majority of countries during the discussions. Most importantly, the mandate of the expert working group established at UNEA-3 was extended to continue its work, including by identifying technical and financial resources or mechanisms, and to report on its progress in considering response options at UNEA-5 in February 2021. The extension of this mandate keeps plastic on the international agenda and provides an opportunity to consider a future legally binding agreement.

Despite the overall disappointing outcome in not making progress at the speed and scale needed, countries remain committed to pursuing international cooperation and coordination to address the plastic-pollution crisis.

David Azoulay, Environmental Health Director, Center for International Environmental Law (CIEL): “At UNEA-4, the vast majority of countries came together to develop a vision for the future of global plastic governance. Seeing the US, guided by the interests of the fracking and petrochemical industry, leading efforts to sabotage that vision is disheartening. But the growing appetite for better global plastic governance is evident, and this UNEA ensured the continuation of a process on which countries can build the future global framework to stop plastic pollution.”

Von Hernandez, Global Coordinator, Break Free From Plastic: “Corporations should hear the call coming out of UNEA-4: Requirements for reduction are coming. They should support community zero-waste systems around the world by reducing the production of unmanageable waste and reinventing delivery structures for products to eliminate plastic packaging. We have a lot of collaborative work to do in the coming years to create policies and markets that are healthy, responsive to local needs, and based on systems of refill and reuse.”

Christopher Chin, Executive Director of The Center for Oceanic Awareness, Research, and Education (COARE): “Waste management is an important part of the conversation, but it cannot effectively address the deluge of plastic pollution we all face. We cannot recycle our way out of this problem. While we are certainly disappointed that progress was stifled by industry-embracing obstacles imposed by a distinct few member states, we are encouraged by the otherwise near-universal support for forward action towards upstream solutions and discussions towards solutions considering the full lifecycle of plastics, including a potential new legally binding framework.”

Fabienne McLellan, Director International Relations, OceanCare: “One cannot help but note that we are heading for yet another failure by some governments to take real action due to nationalistic agendas. The problem is easy to understand, there is enough data, but the blockade of a few, powerful countries isn’t. We are leaving UNEA-4 without a strong decision and are sending a weak signal to the private sector. This is troubling as there should be clear guidance from international bodies towards a sustainable circular economy, a full lifecycle approach, and a call for a global governance architecture.”

Delphine Lévi Alvarès, Global Alliance for Incinerator Alternatives (GAIA) and Zero Waste Europe: “The need to confront marine plastic pollution and single-use plastics are undeniably at the top of the global policy agenda, and Zero Waste initiatives at the local level have received recognition. The details of the final resolutions may be weak, but governments have real policy examples to follow, including the recently-adopted EU Directive on single-use plastics and bans on wasteful plastic products at the local and national level. These policies address the production and consumption drivers of plastic pollution. We salute the efforts of the countries and regions who stood strong in this debate in seeking equally ambitious action at the global level.”

Tim Grabiel, Senior Lawyer, Environmental Investigation Agency (EIA): “Future generations will confront many indescribable problems due to a lack of political will to tackle head on the environmental issues of our time. We do not need to add plastic pollution to that list. Although we regret the lack of urgency displayed by a few bad-faith actors, we are encouraged that the expert group will be reconvened and expect progressive countries to use it as a launch pad for meaningful action at the next UNEA in February 2021.”

Tadesse Amera, CoChair, International Pollutants Elimination Network (IPEN), Ethiopia: “As the oil, gas, and petrochemical industries are gearing up to escalate plastic and chemical production, governments at UNEA-4 could not curb the power of these private interests. This is concerning as the volume of plastic pollution will grow too. Plastics are toxic. Toxic chemicals -linked to cancer and early puberty in children- are used to make plastics, yet this issue was neglected in the final UNEA-4 outcome. These toxic chemicals additives in plastic are released later, creating toxic liabilities for chemical and plastic producers. In Africa, imported plastic products and plastic waste should be returned back to the producers to protect us from the toxic chemicals in the plastic materials. The industries producing these harmful chemicals should have an extended producer responsibility, and they should pay the costs related to their toxic plastic waste mess. In the big picture, toxics in means toxics out. We can’t recycle toxic plastics and pretend that the marine litter chaos is a waste issues; it’s a toxic product issue.”

Jane Patton, Director, No Waste Louisiana: “Plastic is pollution the minute it is made. We must reduce the production and use of plastic across the board to protect communities and health. No people or places should be sacrificed to corporate profit or a culture of consumption, and we can avoid that by taking into account the full lifecycle impacts of plas
tics. We are optimistic about the ambitious steps our governments will take to prevent plastic pollution, including production reduction, phase out, and investment in zero-waste systems.”

David Sutasurya, Indonesian Zero Waste Alliance: “The plastic industry is polluting developing countries, where they have fewer options of non-plastic alternatives and are directly exposed to plastic pollution every day. Multinational corporations have systematically pushed out local industry that uses much less plastic, in addition to facilitating the import of waste into developing countries from the high-consumption Global North. It is unfair that developing countries are using taxpayers’ money to manage these wastes that can neither be recycled or composted. Framing marine litter as only a waste management problem is nonsense when it’s actually a reflection of the industry’s refusal to take responsibility on the plastic pollution crisis. Multinational companies, together with national plastic industries, are now actively blocking any government effort to hold them accountable and responsible for the waste of their product, including significant reduction of its uses. Developed countries and industries have to be responsible for the waste problem that they create in developing countries and should support legally binding measures on reduction of global plastic production and consumption.”