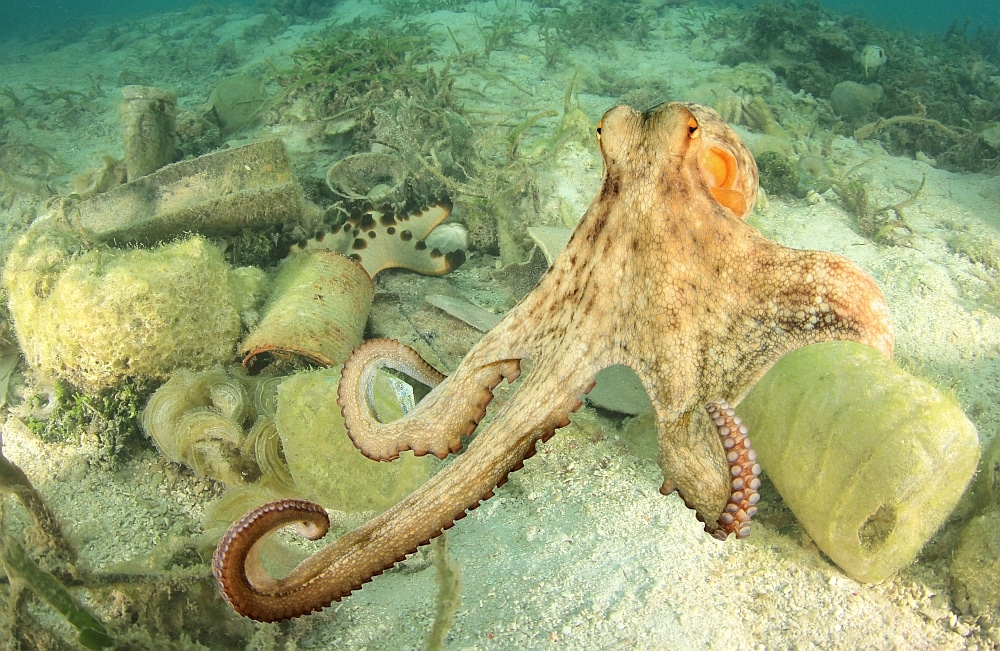 GOTHENBURG, SWEDEN – Increasing levels of chemical and plastic pollution are major contributors to declines in the world’s fish populations and other aquatic organisms, according to a new report released today. The report is the first to bring together in one place the latest scientific research demonstrating how chemical pollution is adversely impacting the aquatic food chain that supports all life on earth.

“Many people think fish declines are just the result of overfishing. In fact, the entire aquatic food web has been seriously compromised, with fewer and fewer fish at the top, losses of invertebrates in the sediments and water column, less healthy marine algae, coral, and other habitats, as well as a proliferation of bacteria and toxic algal blooms. Chemical pollution, along with climate change, itself a pollution consequence, are the chief reasons for these losses,” said Dr. Matt Landos, report author and Director of Future Fisheries Veterinary Services.

Aquatic Pollutants in Oceans and Fisheries documents the science and numerous ways in which chemicals compromise reproduction, development, and immune systems among aquatic and marine organisms. The report is a joint project of the International Pollutants Elimination Network (IPEN) and the National Toxics Network (NTN).

Authors of the Aquatic Pollutants report warn that the impacts scientists have identified are only likely to grow in the coming years and will be exacerbated by a changing climate.

“The production and use of chemicals have grown exponentially over the past couple of decades. Many chemicals persist in the environment, making environments more toxic over time. If we do not address this problem, we will face permanent damage to the marine and aquatic environments that have nourished humans and every other life form since the beginning of time,” said Dr. Mariann Lloyd-Smith, IPEN Senior Advisor and report co-author.

Key areas of concern are:

Pesticides. Many pesticides known to cause harm are still in widespread use and are present at harmful levels in aquatic environments. Some of these substances not only bio-accumulate in aquatic organisms, but they also destroy the habitat and food supplies aquatic organisms depend on for life, including insects. Pesticides enter aquatic and marine environments through direct sources such as run-off from agriculture, golf courses, sports fields, parks, and residential properties, as well as through indirect sources such as sewage treatment plants and spray drift.

Pharmaceuticals and personal care products. Wastewater treatment facilities do not remove all pharmaceutical residues, and these products are now found throughout marine and coastal waters, as well as rivers and streams. A 2019 global study found at least one antibiotic in two-thirds of the sites studied and unsafe levels of antibiotics in 15% of the sites.

Plastics. Many plastic chemicals are toxic, and microplastics also attract, concentrate, and magnify other persistent toxic chemicals from the surrounding aquatic environment onto their surfaces. Microplastics have been found in commercial fish species throughout the world. Fish and other organisms often mistake the tiny plastic pieces for food, thereby contributing to their malnutrition and exposing fish and the food chain – including fish eaters – to toxic chemicals. This problem is only likely to grow as the petrochemical industry offsets falling fossil fuel revenues with planned rapid growth in plastics production.

“We are at the precipice of disaster, but we do have an opportunity for recovery. The out-of-control expansion of the polluters – the oil, gas, plastics, and chemical sectors – needs to be reined in. Governments around the world must urgently acknowledge the environmental, economic, and public health degradation caused by chemical pollution and act on the scientific evidence to develop policy and lead their communities to totally re-think how chemicals are used,” said Jo Immig, NTN National Coordinator and report co-author.

The report notes that progress will require fundamental changes in the way we produce, use and manage chemicals and their associated wastes. Addressing ocean pollution and its impacts on fisheries will need substantial shifts in industries, economies, and governance, including the cessation of destructive industries like deep-sea mining and stopping the devastating practice of using our waterways as waste dumps. Re­generative approaches to agriculture and aquaculture are urgently required to help lower carbon emissions, stop further pollution, and begin the restoration process. Transitioning away from fossil fuel extraction and use remains an urgent priority, as well as holding chemical producers accountable and responsible under the polluter pays principle.

IPEN (International Pollutants Elimination Network) is a global environmental network of over 600 public interest NGOs in 124 countries, working to eliminate and reduce the most hazardous substances to forge a toxics-free future for all. IPEN is registered in Sweden as a public interest non-profit organization.

NTN (National Toxics Network) is a not-for-profit civil society network, based in Australia, striving for pollution reduction, protection of environmental health, and environmental justice for all. NTN is committed to a toxics-free future.