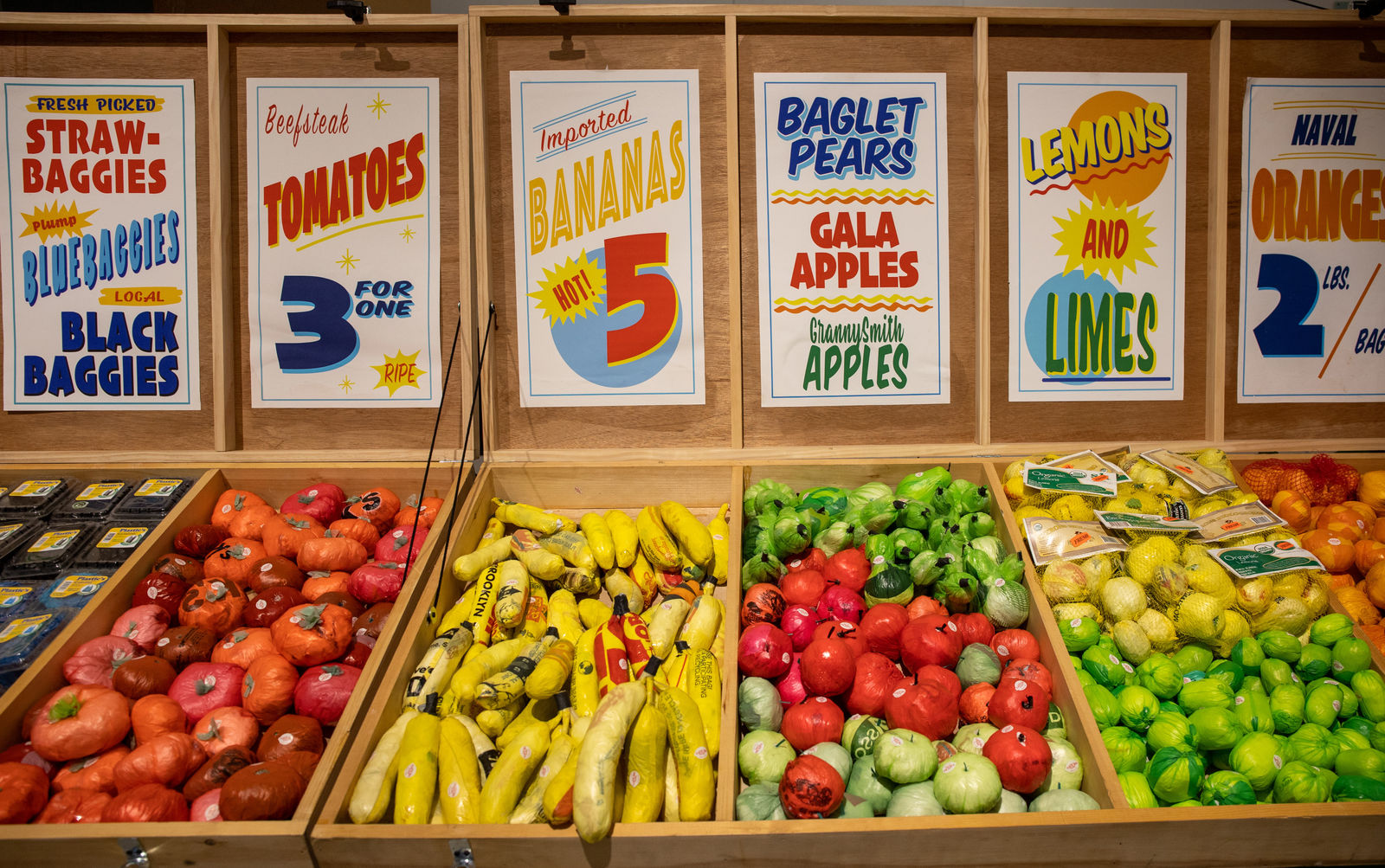 There are two modes to experience this presentation: timed entry to the “store” itself to wander the aisles and discover the abundant products devised by the Brooklyn-based artist Robin Frohardt; or, a limited number of tickets are available to the ‘live immersive experience’ where a puppet film, performers and handmade sets tell the darkly comedic story of how the plastic waste left behind today might be interpreted by future generations.

Frohardt states, “The Plastic Bag Store is a visually rich and humorous experience that hopefully encourages a different way of thinking about the foreverness of plastic, the permanence of the disposable and that there is no “away” when we throw something out. There is great humor to be found in the pitfalls of capitalism—humor and satire can be powerful tools for social criticism especially with issues that feel too sad and overwhelming to confront directly.”

“We at Plastic Pollution Coalition are excited to collaborate with Robin Frohardt’s ‘The Plastic Bag Store’ because we believe in the power of art, science, and communication,” Dianna Cohen, Co-Founder and CEO of Plastic Pollution Coalition. “This immersive installation and film connect with people’s hearts and with their guts. This show makes you think of plastic in a new way, imagining a future society looking back on how we used plastic, empowering us to create the systems change needed now for a plastic-free planet.” 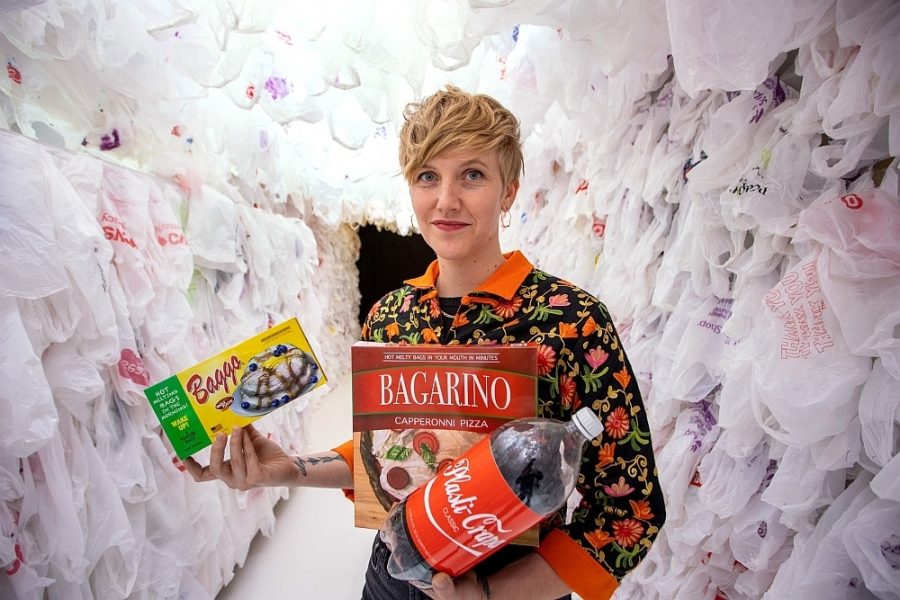 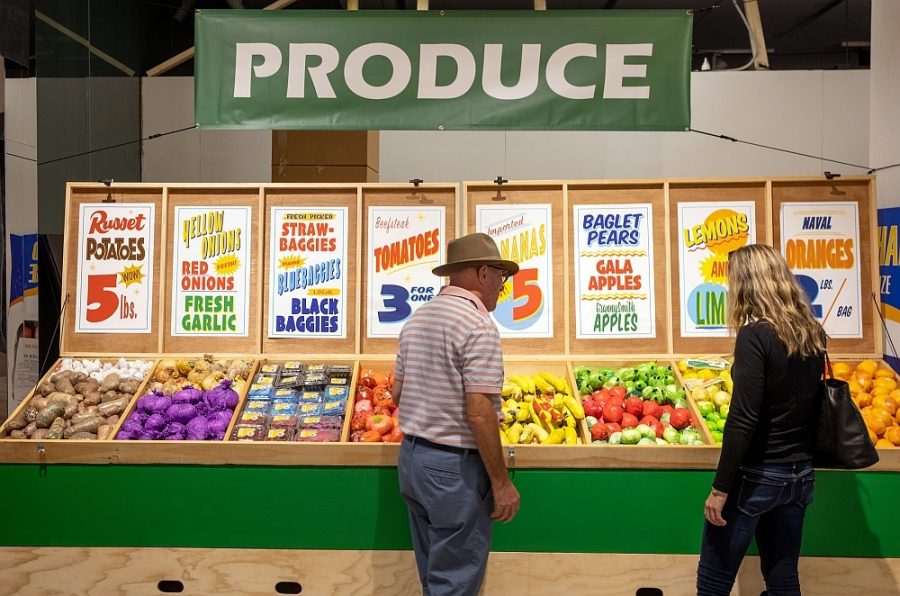 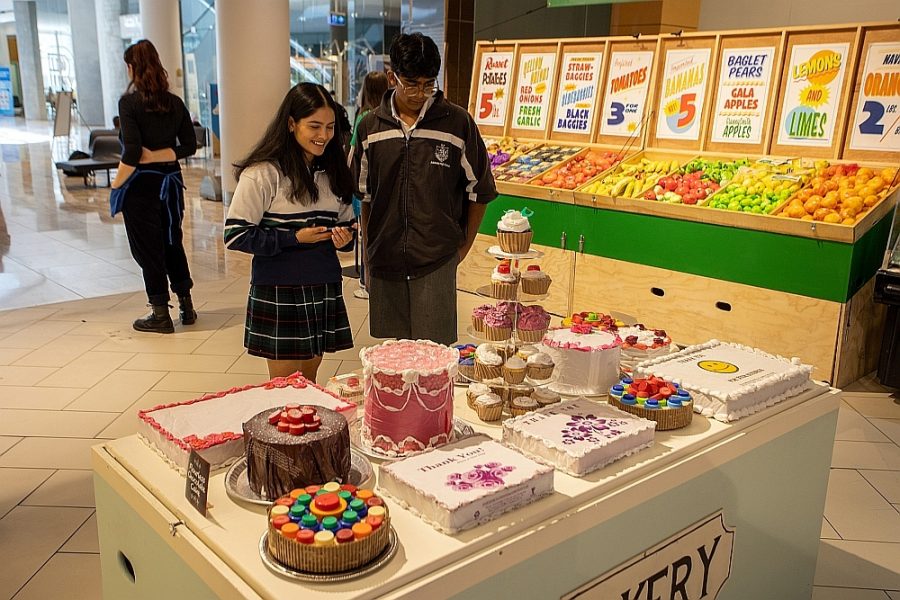 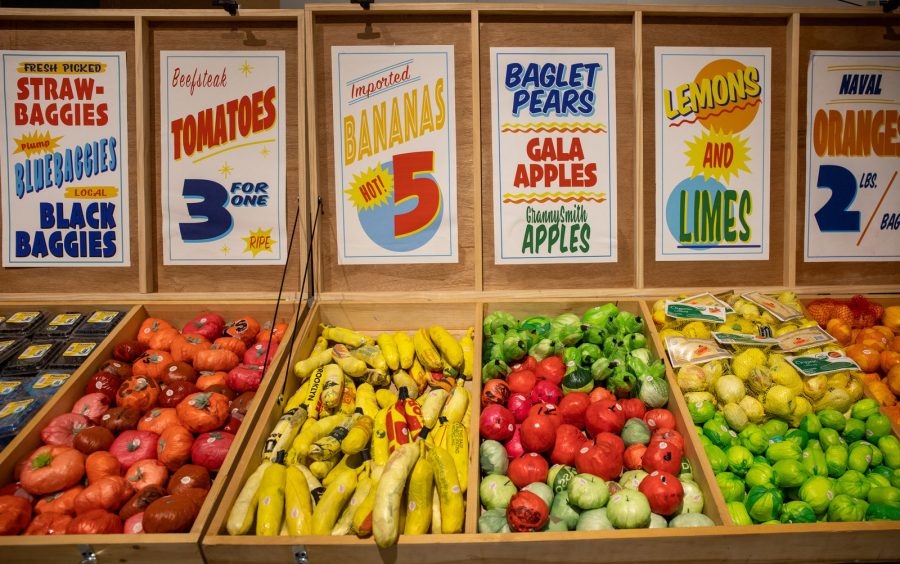 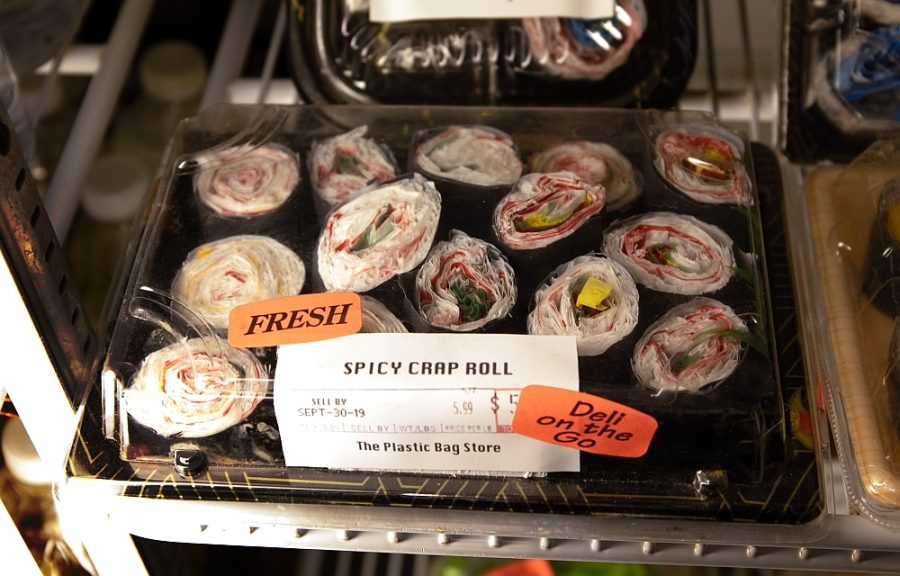 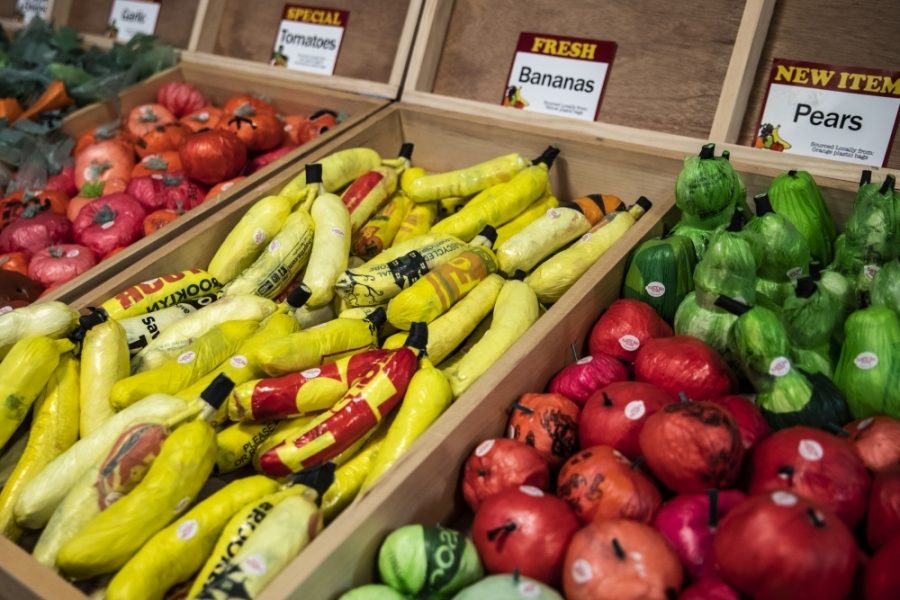 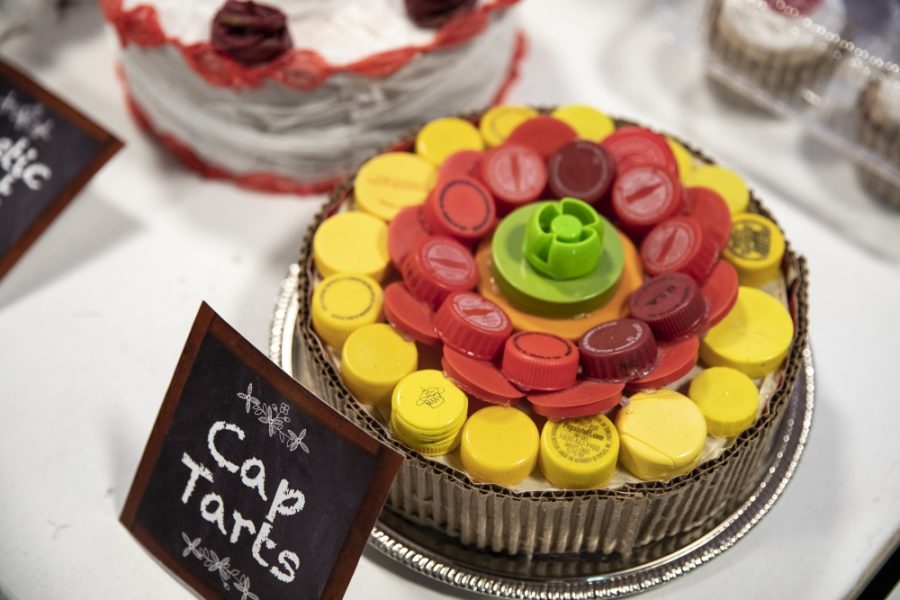 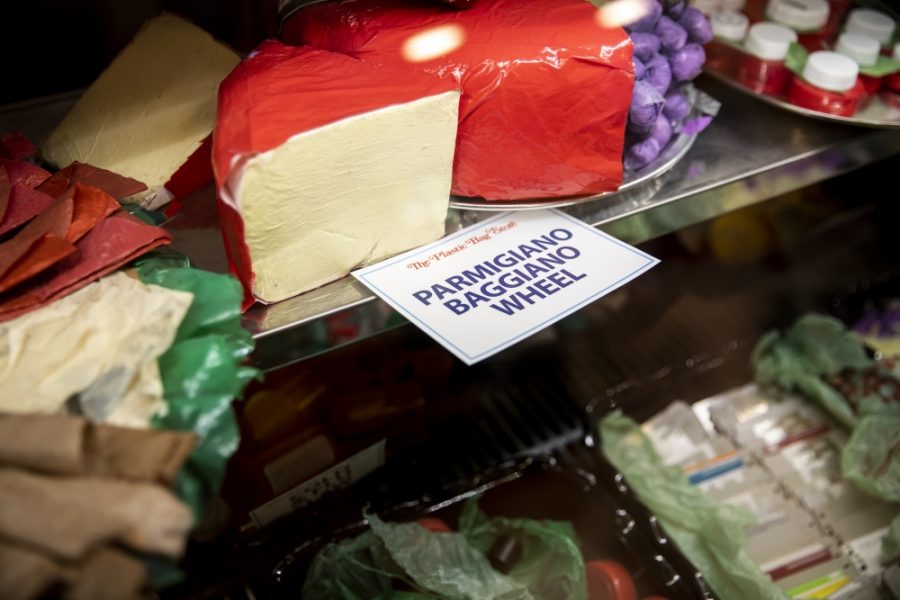 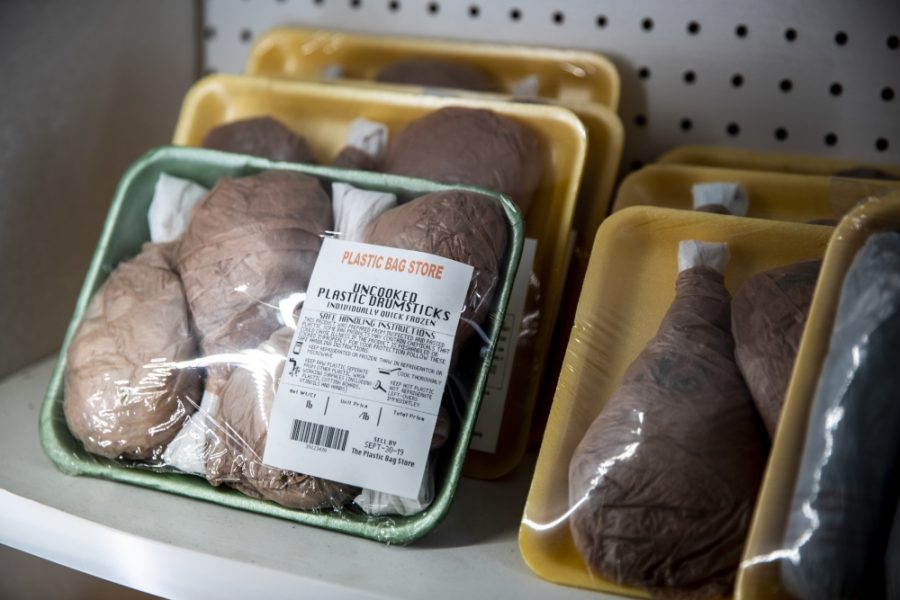 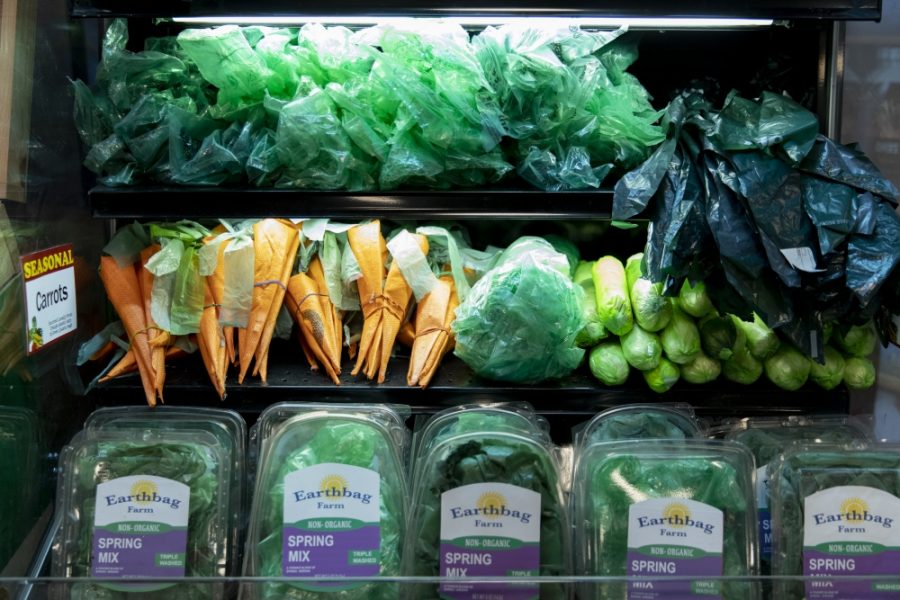 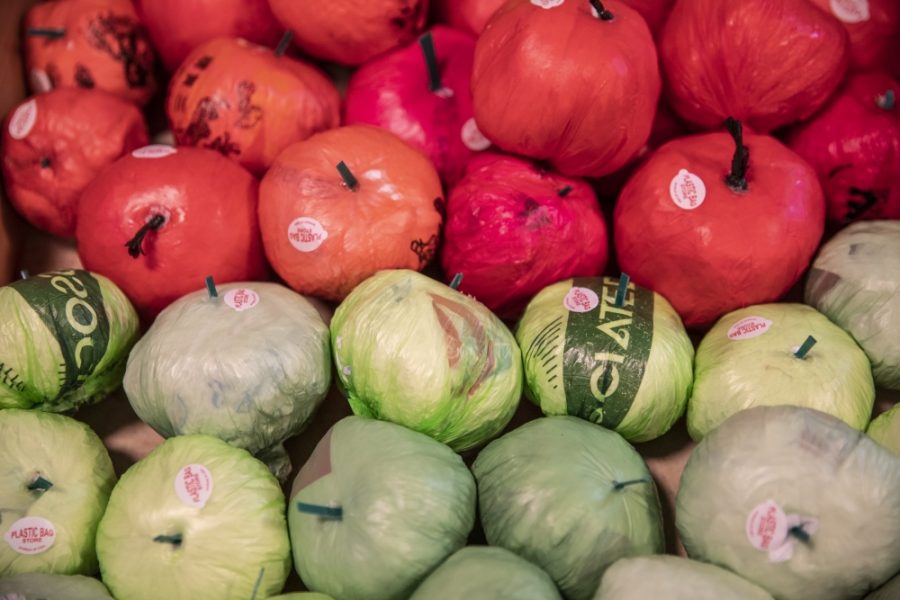 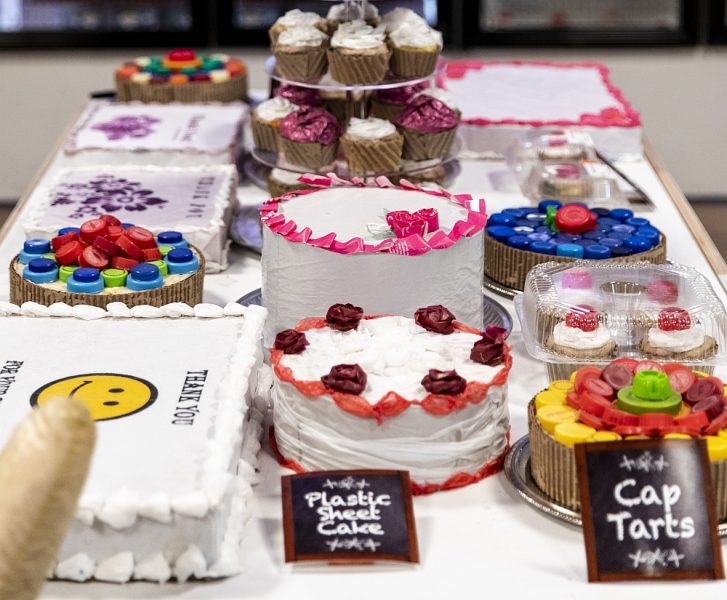 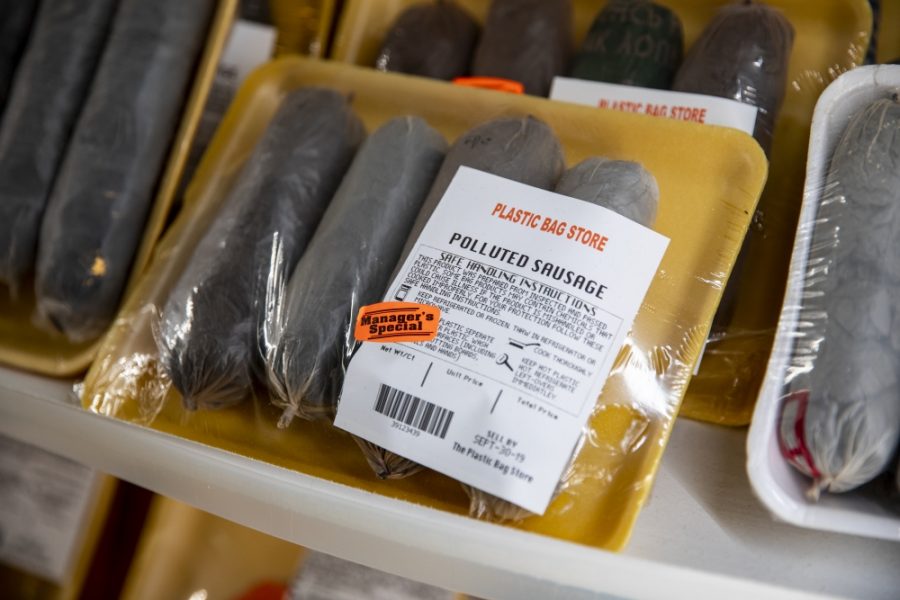 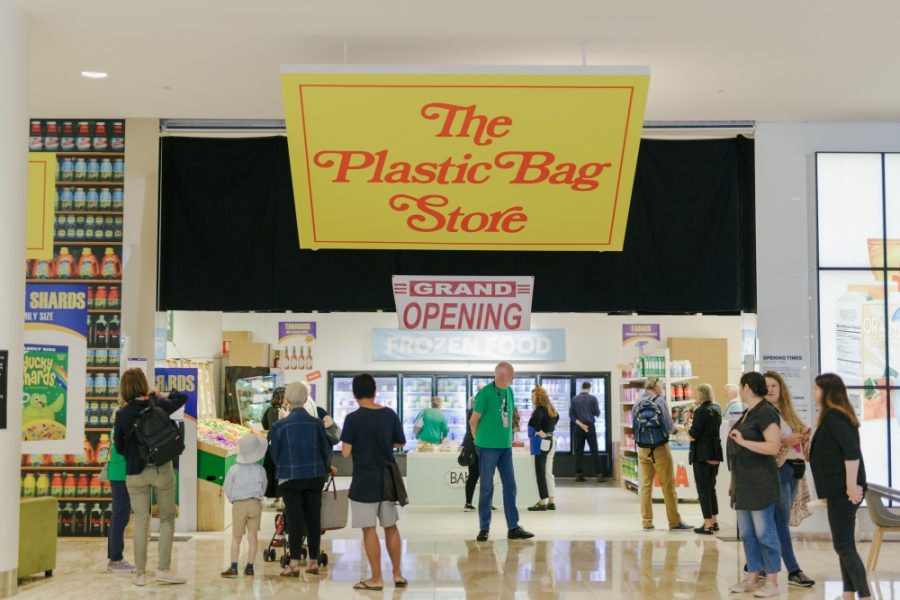 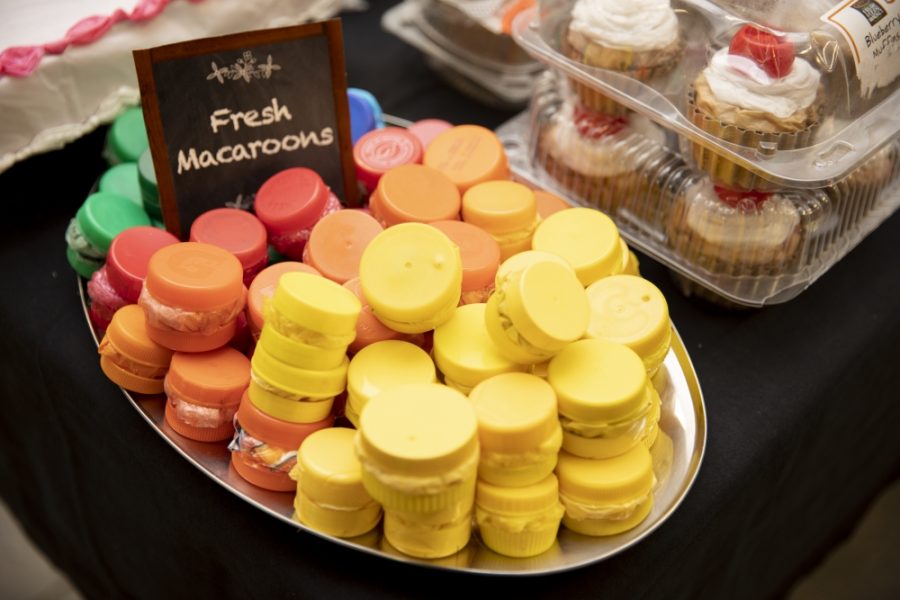 Co-produced by Frohardt and Pomegranate Arts, The Plastic Bag Store premiered in the heart of New York’s Times Square, a surprise success story in the midst of COVID-19 pandemic. The Plastic Bag Store was created over several years by Frohardt in collaboration with her puppetry ensemble and features original music by long-time creative collaborator, the award-winning composer Freddi Price.

“This has been years in the making, and Robin Frohardt has created something that is singular and amazing. The Plastic Bag Store is the story – one with purpose  – of an artist who put a lot of small things into a rather big thing, thanks in part to friends stockpiling plastic material for her,” said Kristy Edmunds, Executive and Artistic Director of CAP UCLA. “CAP UCLA took up the idea of bringing The Plastic Bag Store to L.A. – not exactly a small gesture, but I have learned so much about how to even comprehend the scale of plastics from working on this project. When we introduced The Plastic Bag Store to organizations working on the environmental side – for me it was like stepping across a threshold of feeling overwhelmed to feeling empowered. When an artist’s creativity is conjoined with research, knowledge and enthusiasm – which is exactly what has happened with our extended collaborators in the advocacy and sustainability communities – the impossible become incredibly possible!”

Timed entry to visit The Plastic Bag Store will be open on a set schedule each day. Advance reservations and a suggested donation of $10 per person is requested. Due to health protocols, at the time of this release, up to 20 people each half hour can explore inside The Plastic Bag Store: Installation. Patrons will be greeted by rotisserie chickens, cupcakes, sushi and popular products such as Yucky Shards cereal and Bagorade sports drink all made from discarded, single-use plastics. Then several times each day, the “store” transforms into The Plastic Bag Store: Immersive Film Experience. This 60-minute experience is currently limited to 20 people per show for a $35 adult or $15 student advanced ticket.

In association with CAP UCLA and The Plastic Bag Store,  are numerous ancillary events taking place online and in person. In advance of the official opening of The Plastic Bag Store, CAP UCLA has partnered with the Long Beach Aquarium of the Pacific for a special film screening and talk with the artist Robin Frohardt on Sunday, June 27 in the Honda Pacific Visions Theater at 7pm. Tickets are limited, and will benefit the Aquarium. Additional activities, experiences and special events will be available from Art at the Rendon; The Skirball Center; The Institute of Contemporary Art, Los Angeles (ICA); Plastic Pollution Coalition, Friends of the LA River and CAP UCLA’s Art in Action space, next to the installation, will provide a dive into local and environmental issues with a mobile pop-up library and art-making tables.

The Plastic Bag Store is commissioned by Times Square Arts with generous support provided by the Rockefeller Brothers Fund; The Andy Warhol Foundation for the Arts; the New York State Council on the Arts with the support of Governor Andrew M. Cuomo and the New York State Legislature; the National Endowment for the Arts; public funds from the New York City Department of Cultural Affairs in partnership with the City Council. Additional commissioning support has been provided by Carolina Performing Arts, University of North Carolina at Chapel Hill. It was developed with support from: MANA Contemporary, The Made in NY Women’s Film, TV & Theatre Fund by the City of New York Mayor’s Office of Media and Entertainment in association with The New York Foundation for the Arts; Olson Kundig; The Jim Henson Foundation; and is sponsored, in part, by the Greater New York Arts Development Fund of the New York City Department of Cultural Affairs, administered by Brooklyn Arts Council (BAC). The Plastic Bag Store is a project of Creative Capital.

The Plastic Bag Store film segments were commissioned by UCLA’s Center for the Art of Performance with additional support by the Adelaide Festival.

UCLA’s Center for the Art of Performance (CAP UCLA) is the public-facing research and presenting organization for the performing arts at the University of California, Los Angeles—one of the world’s leading public research universities. We are housed within the UCLA School of the Arts & Architecture along with the Hammer and Fowler museums. The central pursuit of our work as an organization is to sustain the diversity of contemporary performing artists while celebrating their contributions to culture. We acknowledge, amplify and support artists through major presentations, commissions and creative development initiatives. Our programs offer audiences a direct connection to the ideas, perspectives and concerns of living artists. Through the lens of dance, theater, music, literary arts, digital media arts and collaborative disciplines, informed by diverse racial and cultural backgrounds, artists and audiences come together in our theaters and public spaces to explore new ways of seeing that expands our understanding of the world we live in now.

Plastic Pollution Coalition is a global alliance of more than 1,200 organizations, businesses, and thought leaders in 75 countries working toward a more just, equitable world free of plastic pollution and its toxic impact on humans, animals, waterways, oceans, and the environment. Join the Coalition and get involved by visiting plasticpollutioncoalition.org.

An award-winning artist,  puppet designer,  and director living in Brooklyn,  NY.  Frohardt’s performance and puppetry-based  work has been presented at St.  Ann’s  Warehouse and HERE in New  York City,  as  well as national  venues including the Pittsburgh International Festival of  Firsts and the NEXTNOW Festival in Maryland.  Her films have been screened at the  Telluride Film Festival,  Aspen Shortsfest,  Maritime Film Festival at the Parish Museum and Puppets on Film Festival at BAM.  Her original play  The Pigeoning, which debuted in  2013 and  was hailed by  the New  York  Times as “a tender, fantastical symphony  of  the imagination,” continues to tour in the US and abroad,  and has been translated into German,  Greek,  Arabic and  Turkish.  She has received a Creative Capital  Award and a DisTil Fellowship from Carolina Performing Arts  for  The Plastic Bag Store,  which premiered in partnership  with Times Square  Arts in  2020.  She has been the recipient of  Made In NY  Woman’s Fund Grant  Award and a Guggenheim Fellowship.  She is a MacDowell Fellow and a longtime member of  both the  Walgreens and CVS Rewards Programs.