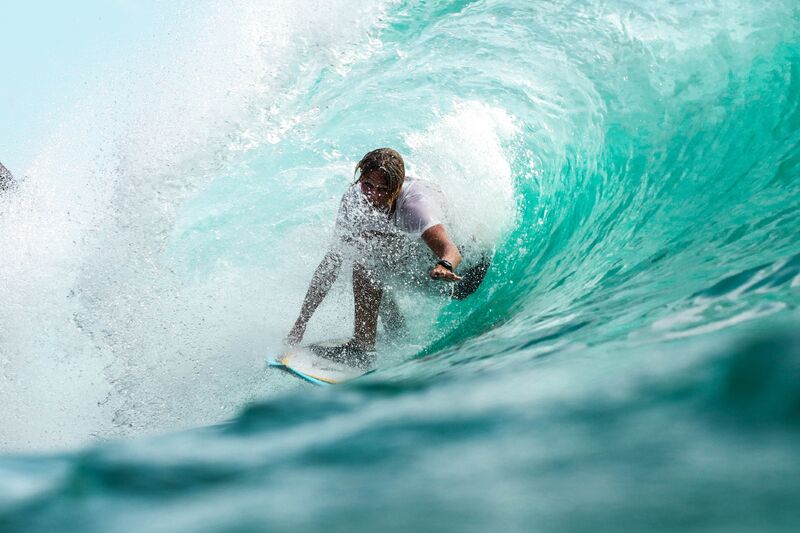 June 18 is International Surfing Day, and surfers were among the first to call attention to the global plastic pollution crisis. From the coasts of the United States to the shores of Australia to the beaches of Southeast Asia and South America, plastic has been washing ashore at greater and greater volumes over the past several decades, as the plastics and petrochemical industries pump out the material at an accelerating pace. And so a dedicated subculture of wave riders found themselves turning to activism to protect the beaches and waters they loved from plastic pollution.

Plastic Pollution Coalition has worked with a dynamic range of surfers and surfer-led organizations for the past decade. In honor of International Surfing Day, we’d like to highlight a few of these inspiring colleagues and friends.

Beginning with organized beach cleanups in the 1990s, Surfrider shifted focus toward policy in 2011, petitioning lawmakers to ban single-use plastic items, among other efforts, to ensure plastic never reached the beaches in the first place.

Now with many chapters worldwide, Surfrider has continued affecting positive legislative changes to reduce plastic pollution across the globe.

Plastic pollution seems irreversible and so horrible. We are ruining numerous ecosystems by overwhelming them with physical and chemical pollution.

Kelly Slater, from conversation with Impacting Our Future

Alison Teal is an explorer, filmmaker, and surfer. Growing up around the world and raised by adventurous parents world-renowned for their photography, which appeared in National Geographic Magazine among other publications, Alison has continued her life of adventure into adulthood and travels the world most of the year.

Alison is a passionate activist who has used her international platform to call attention to the global plastics crisis. She has produced many short films depicting her paddle surfing in a sea of plastic pollution around the world.

Dr. Wallace J Nichols is a scientist, activist, community organizer, author and lifelong ocean protector. Nichols is a PPC founding member and scientific advisor. He works to inspire a deeper connection with nature through his talks, writing, photography, and film.

His book Blue Mind: The Surprising Science That Shows How Being Near, In, On, or Under Water Can Make You Happier, Healthier, More Connected, and Better at What You Do is an international bestseller.

Dr. Nichols authored a blog for Plastic Pollution Coalition detailing trips to the beach with his daughters—who had become overwrought by the prospect of more plastic cleanups, and all the pollution that was preventing them from fully enjoying their beach time.

Dr. Nichols is currently hosting the 9th Annual 100 Days of Blue Challenge asking people to get near, in, on or under water daily. The challenge runs from May 30 through September 6 and invites people to share their inspiring experiences with water across social media networks by tagging #bluemind.

Mark Cunningham is a body surfer—meaning rather than climbing up on a board to ride crashing waves, he rides using only his body. Mark is considered by many to be the best body surfer in the world.

With his deep understanding of the ocean, Mark has become a very proactive ally in the movement to address plastic pollution. From appearing in documentary films like The Smog of the Sea, to protecting the North Shore of Oahu, to creating and exhibiting works of art made from washed up and found plastic pollution, Mark’s passion for keeping the oceans and the rest of the planet free of plastic and its toxic impacts is inspiring.

When it comes to legendary surfers, few achieve such renown for their abilities as Gerry Lopez, who has been dubbed “Mr. Pipeline” by his peers and surf fans around the world.

From the age of 14, when he won his first state championship in his home of Hawaii, Gerry has traveled the globe riding the waves of superstardom for his surfing talent. Practically living in the water, Gerry watched as the beaches and oceans he loved began to transform into repositories of plastic waste.

In 2011, Gerry wrote an essay for Plastic Pollution Coalition reminiscing fondly of a time when surfing was plastic-free.

The splendid waves of G-Land never seemed to change and we enjoyed surfing them over the next 20 years. It was a surf paradise beyond compare. And it opened my eyes to how quickly an absolutely pristine, totally natural place can become a mess. Plastic is a problem for all of us. It creates toxic pollution during its manufacture, use, and disposal. Recycling is not a solution, every bit of plastic made, still exists.

Ben Harper is a three-time Grammy-winning singer/songwriter and multi-instrumentalist. He is also an avid skater and surfer and has been credited as a musician who makes music “for surfers by surfers.”

Ben uses his international platform to promote awareness on a multitude of issues, including plastic pollution. He is a founding member of Plastic Pollution Coalition.

Jack Johnson is a prolific singer/songwriter and avid surfer. The son of the late surfer Jeff Johnson, Jack began surfing at five years old and was the youngest participant at age 17 to reach the finals of the Pipeline Masters in Maui. Soon after, Jack left competitive surfing and began focusing on music and filmmaking.

Jack has also encouraged his fans to take part in the Plastic-Free July challenge. With Kim, Jack co-founded the Kokua Hawaii Foundation—a non-profit organization that supports environmental education in schools and communities in Hawaiʻi, and created Plastic-Free Hawaii.

If you’re heading to a Jack Johnson concert this year in Washington D.C. on June 24; Berkeley, CA, on September 28; Los Angeles, CA, on October 1; or Chula Vista, CA, on October 7, be sure to say hi to the Plastic Pollution Coalition team! We’re excited to partner with Jack Johnson on his 2022 Summer Tour as an All At Once Non-Profit Partner. All At Once is Jack’s social action network connecting nonprofits with people who want to take action and give back to their community, by promoting sustainable and equitable food systems, plastic-free initiatives, healthy watersheds, and more!

Donavon Frankenreiter is an American musician and former professional surfer.

Donavon uses his music and platform to elucidate to his global audience the threat of plastic pollution. As part of his plastic pollution activism, Donavon teamed up with Brazilian singer-activist Céu and others to produce the song and campaign “Listen to the Ocean”—a project aimed at inspiring people to take action to keep plastic from entering the ocean.

Surfer/filmmakers Chris & Keith Malloy have spent years traveling the world searching for the best little-known surfing spots. From Antarctica to Iceland and from Galapagos to New Caledonia, no matter how remote the place was, plastic was already there. They documented this experience in a short film titled Plastic Gets There First.

Keith’s debut solo documentary Come Hell or High Water, which he wrote, produced, directed, and participated on screen in, was dedicated to Plastic Pollution Coalition and to Keep The Country Country.

Laird Hamilton, considered by many to be one of the greatest living outer wave surfers, is renowned as an original innovator of big wave surfing. He and a group of his peers invented the “tow-in surfing” method, where surfers are towed onto massive waves too large, powerful, and fast to be paddled onto.

Laird has a rule: any plastic he encounters while surfing, he brings ashore. For as consistent a surfer as Laird, this is a tall order, as the oceans have progressively filled with more and more plastic each year.

Garrett McNamara is an 8-time Guinness World Record holder for the largest wave ever surfed—which breaks on the shores of Nazaré, Portugal.

In 2018, Garrett launched a campaign to reduce plastic pollution—dubbing it as his effort to give back to the oceans and seas what they had given him after a lifetime of surfing. He has organized beach cleanups and awareness events, and uses social media extensively to encourage people to reduce their own plastic footprints. Garrett is featured in the award-winning HBO documentary series, 100 Foot Wave.

Sierra Quitiquit is a model, skier, surfer, and activist who co-founded Plastic Free Fridays in 2019. Plastic Free Fridays’ mission is to help individuals avoid single-use plastics by raising awareness and shaping positive habits, while also working towards systemic change on the community, corporate, and policy levels.

Merijn Tinga is a biologist and artist—but once he steps into the water, he becomes the Plastic Soup Surfer.

Tinga has made it his life’s mission to stop plastic pollution from entering the oceans at the source: the industries that pump out more than 400 million metric tons of plastic annually. The Plastic Soup Surfer advocates for better regulations to put pressure on companies to take responsibility for their plastic pollution.

Surfers Against Sewage is a grassroots collective of surfers and activists who have, since 1990, organized across the UK to eliminate plastic pollution, sewage, and other hazardous pollutants from beaches.

Surf and Clean is a Spain-based non-profit organization founded by Surfers. Their mission is to educate the public about plastic pollution and its impacts on social justice and the environment—especially how it harms the ocean.

They have a simple message for all surfers: “Siempre que vayas a surfear recoge algo de la playa.” [Whenever you go surfing, pick up something from the beach.]

Surfers for Climate is an Australian-based NGO founded by surfers and dedicated to turning the tide on climate change.

Surfers for Climate was co-founded by surfers Johnny Abegg and Belinda Baggs, who attended a climate summit on Heron Island, Queensland, Australia, in October 2019. They were moved by what they learned about climate science, the harmful effects of climate change on people and nature, and the solutions that were presented by Australia’s leading scientists and policy experts. Most importantly, though, they were struck by the critical role the oceans play in our climate system, and they committed to raising awareness of these issues in Australia and beyond.

The Cigarette Surfboard Project was founded by documentarian surfers Taylor Lane & Ben Judkins who are currently making a documentary about plastic pollution and funding the film by making surfboards out of washed up and collected plastic cigarette butts from beaches around the world.

The Wahine  Project was created in 2010 as an effort to reach young girls around the world who would otherwise not have access to the resources that would allow them to surf.

The Wahine Project seeks to break down the barriers that prevent the participation of youth in ocean sports—whether geographical, financial, or a lack of opportunity—and provide youth the chance to become proficient “water humans.” As a result of this relationship, young people are given a sense of responsibility and instilled with an awareness of climate change, environmental injustice, and their ability to create positive change in the world.

A visual artist from Southern California, Dianna watched as beaches worldwide began accumulating more and more toxic plastic over the decades. She began transmuting the plastic she found into compelling works of art, and upon learning more about the material, pushed for plastic to be called what it is: pollution. She has spent over a decade advocating for policies to reduce plastic production and use and encouraging people to refuse single-use plastics.

In 2019, Dianna received the Environmentalist of the Year award from the Surf Industry Members Association (SIMA) and was presented the award by PPC notable, multiple Academy Award-winning actor, and surf enthusiast Jeff Bridges.

YOU CAN HELP PROTECT THE OCEANS TOO!

Celebrate International Surfing Day and help keep the oceans—and our entire planet—free of plastic pollution. Take the pledge to refuse single-use plastics, and ask your friends to do the same.