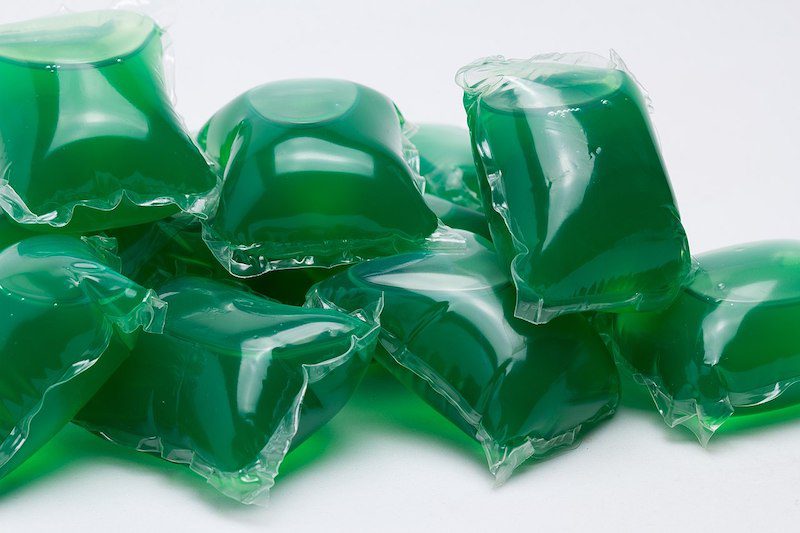 Home » News » PVA Plastic: What You Need to Know

Earlier this week, Plastic Pollution Coalition and other nonprofit groups joined cleaning products company Blueland to petition the U.S. EPA to urgently study and regulate a type of plastic called polyvinyl alcohol (which is also referred to as “PVA” or “PVOH”).

PVA/PVOH has been produced industrially since the 1930s and is used for a wide variety of applications, including fibers for construction supplies; fishing gear; papermaking; cosmetics; industrial sprays, paints, and sealants; textile (clothing) sizing; packaging materials; food additives; pharmaceutical and medical products; and—quite commonly—film-coated detergent pods and sheets. In light of our petition, corporations that make and sell PVA/PVOH products have doubled down on asserting their material is safe and suggesting there is a “debate” over the safety of PVA/PVOH. But in reality, enough evidence exists to merit further investigation of the impacts of PVA/PVOH on human and ecological health.

To set the record straight, we’ve put together this FAQ backed by science and common sense. Read on to learn the truth about PVA/PVOH.

1. Why am I finding conflicting information about PVA/PVOH?

Conflicting information about PVA/PVOH exists today for two key reasons. Corporations: 1) use greenwashing as a marketing tactic to sell potentially harmful products that we might not otherwise buy, and 2) have control of a scientific environment in which they both shape commonly accepted information and are largely protected from scientific and regulatory scrutiny.

Many highly visible scientific studies that appear favorable of PVA/PVOH, especially those demonstrating apparent “degradability,” are commonly commissioned by plastic and related industry trade groups seeking to sell PVA/PVOH products. Many cleaning products made with PVA/PVOH are marketed as “eco-friendly” because they appear to readily “dissolve” in water—seemingly bypassing issues of toxicity and persistence that other plastics face.

Such favorable research findings help corporations sell more PVA/PVOH products, and receive passes from the U.S. EPA, FDA, and other regulatory agencies tasked with protecting human and environmental health. A lack of unbiased information, poor chemical regulatory environment, and corporations’ drive for profits prevent us from getting a clear picture of what PVA/PVOH is and what it actually does to the environment and our health. And, because it is everywhere, we deserve to know the truth.

Even with decades of research, there is currently no definitive proof that PVA/PVOH is truly biodegradable. In fact, research on the textile industry in particular—a major consumer of PVA/PVOH, which is used to “size” or coat and protect woven fibers during manufacturing—suggests that PVA/PVOH plastic does not degrade, even in water; is commonly found in textile wastewater; and due to these concerns, should be replaced in this application with more benign alternatives.

Pure PVA doesn’t easily break apart and must be diluted by degradable plant starches and proteins to even appear to dissolve. Think about what happens when you mix salt with water: Just because you can’t see all the tiny grains of salt in the water as they dissolve doesn’t mean the salt doesn’t still exist. PVA/PVOH films like those used in dishwasher and laundry pods and sheets are designed to be similarly soluble in water. PVA/PVOH can be treated in a way (by running its main ingredient, polyvinyl acetate, through a process called hydrolysis) that makes its bonded particles break apart more easily and appear to “dissolve” in water— instead of remaining whole, visible, and separate from water.

The EPA currently lists PVA/PVOH on its Safer Choice and Safer Chemical Ingredients lists. But a close look at research on PVA/PVOH and the EPA’s generous criteria for “safe” standards shows that PVA/PVOH is not verifiably nor consistently biodegradable. According to EPA standards, if 60% of a substance has degraded into carbon dioxide and water in 28 days, it passes its OECD 301 standard, and can be called ”readily biodegradable”—even though it is not necessarily clear what happens to the remaining mass and chemistry of this substance when it is diluted with water.

In the case of PVA/PVOH, the research recently cited by the American Cleaning Institute shows a wide range of performance when it comes to PVA’s supposed degradation in water only. However, a close look reveals flaws in the study ACI cites: It is industry driven, small in size, brief in duration, and lastly, does not actually define what it means by “biodegradable.”

As other research indicates, PVA/PVOH itself is not actually biodegradable by the common definition of the word. PVA/PVOH, while synthetic and made of fossil fuels, is commonly mixed with degradable additives, such as plant starches and proteins, or even nanosized clays and metals. The presence of these other substances and particles helps cleave apart intact PVA/PVOH plastic, helping it seem to disappear when it makes contact with water.

PVA/PVOH films like detergent pods and sheets are especially prone to causing pollution because they are discharged directly into your home’s wastewater system. From there, polluted water is sent back into the ground through your septic, cesspool, or sewer system (and in this case, usually to a sewage treatment plant). Because tiny plastic particles are extremely hard to capture, water could thereby remain polluted by PVA/PVOH and other plastics even after treatment—endangering our planet’s waterways and our health.

3. Is PVA/PVOH safe for people and the planet?

According to the EPA, and corporations and industries that make and sell PVA/PVOH, this plastic is currently labeled as “safe,” largely due to its apparent biodegradability. Yet there is a serious lack of unbiased, dedicated research on the human and environmental health effects of PVA: Health-related research on PVA/PVOH has almost exclusively been conducted on nonhuman animals such as rodents and dogs by PVA/PVOH producers. What little research has been done on humans shows concerning links to inflammation and irritation, especially when PVA/PVOH exposure occurs over a prolonged period.

Despite clearly missing data on PVA/PVOH’s short-term and long-term human health and environmental effects, makers of this material advise on their own safety information sheets that their employees avoid breathing in, touching, consuming, and otherwise coming into contact with PVA/PVOH. With PVA/PVOH detected in human breast milk, it appears this plastic has the potential to accumulate in the environment or at least in human bodies where it could cause adverse health effects. Bioaccumulation of PVA has also been observed in carp fish over a short-term period. To prevent potential harm, much more research must be done to understand PVA/PVOH’s full range of effects on people, other animals, and the environment.

What’s more, PVA/PVOH and all other plastics are disproportionately produced in facilities intentionally placed in underserved low-income, rural, and BIPOC communities. This intentional poisoning of specific communities results in widespread health and environmental injustices, which the EPA has recently agreed to double down on. Allowing for continued production of all plastics—including PVA/PVOH—undermines the EPA’s initiative to seriously address injustice in the US. Producers of plastics release large quantities of greenhouse gases during manufacturing, in addition to toxic chemicals known to cause human health problems. PVA/PVOH production releases potent methanol gas, and often butyraldehyde (PVA/PVOH can be combined with this chemical to make polyvinyl butyral [PVB], another type of plastic, in the same facilities as PVA/PVOH).

4. Is there any way to find nontoxic, plastic-free detergents?

5. What exactly is your petition asking?

With our petition, we are emphasizing that there is currently a lack of accurate, unbiased information on PVA/PVOH and clear reasons to be concerned about its effects on human and environmental health.

The plastics industry, and the petrochemical industry which fuels it, has long tapped into misinformation campaigns to mislead the public and regulatory bodies, enabling widespread production and pollution of plastic across our planet and in our bodies. It is ironic that the ACI has called our common-sense request to the EPA “misinformation,” while it continues to lean on clearly biased industry-produced research to make its case for continued production (and pollution) of PVA/PVOH and other plastics.

We are calling on the EPA to take swift and urgent action to study the full ecological and health impacts of PVA/PVOH to best protect people and our planet from potential harm.