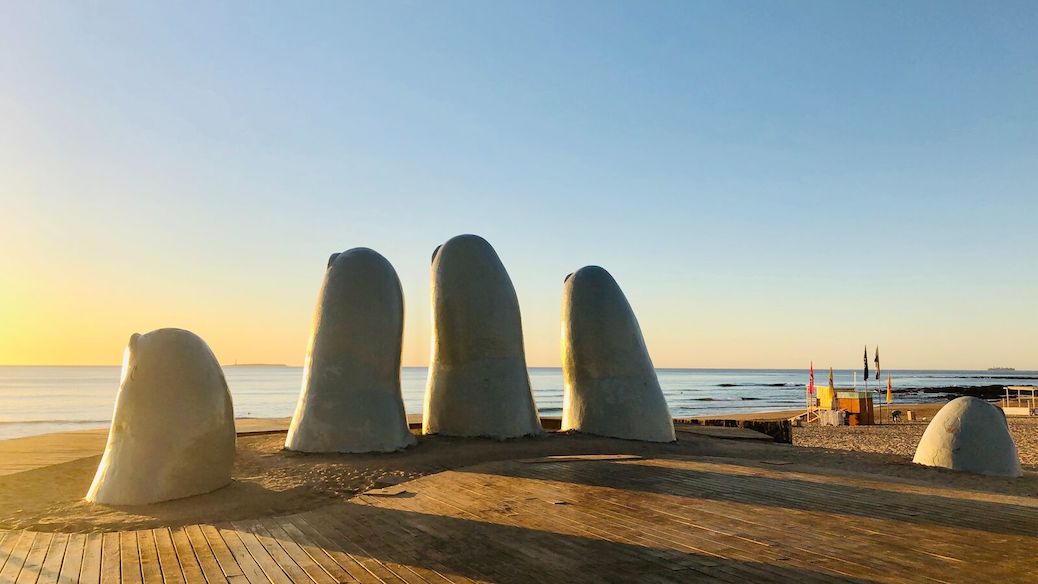 Earlier this year, the United Nations (UN) agreed on a mandate to negotiate a legally binding treaty addressing the full life cycle of plastics. This month, the first of five planned sessions to formulate that treaty began, with the first meeting of the Intergovernmental Negotiating Committee (INC-1) in Punta Del Este, Uruguay. Representatives from UN Environment Assembly governments, the private sector, and civil society—including Plastic Pollution Coalition members and partners from the Break Free From Plastic global movement—attended the meeting. With some positive developments come significant challenges, such as industry interests that run counter to ending plastic pollution, which must be overcome in order to craft an effective global agreement.

On Monday morning, UN High Commissioner of Human Rights Volker Türk made an unprecedented statement about plastics on Twitter:

“The whole cycle of plastics is now a global threat to human rights. We must ensure free, active, meaningful and informed participation in the new negotiations. We need clear boundaries on conflict of interest to ensure the new Treaty puts people before profits.”

Never before has there been wider recognition of the fact that plastic pollution is an urgent global crisis. Plastic pollution is a human health, social justice, environmental, climate, and wildlife issue. People and communities across the world are finally waking up to the fact that plastic pollution impacts everything. Plastics pollute from the moment their fossil fuel ingredients are extracted from the Earth to their eventual fate as microplastics that we are breathing in and consuming in our foods and water—at great risk to our health.

There is widespread agreement that a Global Plastics Treaty is needed. Individuals, activist groups, frontline communities, and scientists from around the world are speaking out about what’s necessary to make the Treaty effective.

During this week’s negotiations it emerged that major oil and gas producing nations like the U.S., Saudi Arabia, and many Asian countries are proposing an agreement where countries would create their own National Action Plans and set their own non-binding targets.

“The US is calling for a treaty with no binding obligations and no requirements to achieve its goal, such as bans on toxic polymers or a reduction in overall production. Every country just does what it wants to. I think that’s a terrible idea.”

A “high-ambition coalition” of countries led by Norway and Rwanda is calling for a curb in plastic production and a phase-out of certain plastic products and toxic chemical additives. Many other UN member states, including African nations, Switzerland, Costa Rica, Ecuador, Peru, and others are also advocating for a global approach.

“Plastics are fossil fuels in another form & pose a serious threat to human rights, the climate & biodiversity. As negotiations towards an agreement to #BeatPlasticPollution continue, I call on countries to look beyond waste and turn off the tap on plastic.”

Break Free From Plastic allies and activists conveyed the message that an effective Global Plastics Treaty must address plastic production and the toxic chemicals in plastics. Downstream solutions like cleanups and reduction legislation like bans do not go far enough to stem the plastic tide. The Plastic Treaty must address environmental injustices and hold corporations, especially petrochemical and plastics companies, and governments, accountable for their roles in creating the plastic crisis. This is why the presence of major plastic producers at INC-1 is a major source of concern for civil society groups, environmentalists, Indigenous groups, and frontline activists.

“To date, the plastics and petrochemical industries have largely self-regulated. This, despite the fact that plastic’s many forms of pollution now pollute every part of our environment and have entered our bodies. Plastic contaminates our waters, soil, air, food, wildlife; our bodies and our children’s bodies. We need a strong, binding global treaty that stops plastic pollution at the source—petrochemical production. We can not afford to allow polluters to continue regulating themselves.”

Powerful remarks were delivered by many partners and allies at the meeting, including this statement by the BFFP US Environmental Justice Delegation. Christopher Chin, Executive Director, The Center for Oceanic Awareness, Research, and Education (COARE), delivered the following statement on November 29, 2022, at INC-1:

“Our understanding of plastic — and its polluting impacts on the environment, climate, human rights, and human health — has evolved greatly over the years, and has led us to these negotiations.

One of the things that has become ever more clear is that we do not have time to waste. We are currently producing more than 400 million tons of plastics per year, and we are already drowning in plastic pollution. . . And that production is planned to double or even triple to many hundreds of millions of tons each year. This scale of production is already creating an urgent crisis — a common concern of humankind — and our very future hangs in the balance of these proceedings.

Let’s be honest: 99% of what goes into plastic is fossil fuels; plastics are essentially fossil fuel in a different format, and we cannot address plastic pollution without addressing plastic production. We must put limitations on the amount of plastics being produced, because we are already drowning.

The fact is that our society is overflowing with plastic, and we have allowed this to happen. It is more than just an indulgence, however — this is literally killing people.

A clean, healthy, and sustainable environment is a recognized human right — and a right for all, not just a privilege for some.

Dr. Marcos Orellana, UN Special Rapporteur on toxics and human rights has noted that there are human rights infringements across the entire life cycle of plastic, and we’ve seen and heard that these effects are most dire for vulnerable populations.

Industry must stop producing toxic materials and stop using toxicants in the production of plastics.  We need transparency so that we can identify and avoid hazardous substances and additives — not only in the production and use of materials and products, but also in their reuse, disposal, and end of life. There is absolutely no room for circularity when potentially poisonous substances are hidden in the waste stream.

Innovation will most certainly be necessary as we pursue a future free of plastic pollution. However, innovation should include scalable systems of re-use and refilling — for example — and not simply new ways to try to sell old ideas.

There is no room and no time for false solutions like so-called ‘advanced recycling’ and ‘chemical recycling.’ These terms are just a fancy way to mask the burning of plastic, and they cannot meet the scale of the onslaught of plastics production we are facing.

With the very industry creating plastic and plastic pollution weighing in so strongly in the discussion of possible solutions, industry’s self-serving interest is painfully obvious.

Previous processes on the environment — such as climate change — leave civil society tired of empty promises and goals that have not been met. The plastics pollution treaty must establish the global rules, regulations, and support mechanisms needed to end plastic pollution and its harmful effects on the environment, animals, human health, and vulnerable communities.

“Plastic threatens human health at every stage of its existence, from extraction of plastic’s fossil fuel ingredients to production, use, transportation, and disposal. The new plastics treaty must address plastic as a material, beginning with production, and safeguard the human right to a healthy environment, particularly for women, children, and vulnerable communities impacted by this global planetary crisis.”

Learn more about real solutions to the plastic crisis here, and add your name in support of a strong Global Plastics Treaty.