Merah Putih Hijau and The Zero Waste Revolution in Bali

Merah Putih Hijau is a group of passionate people kickstarting and supporting Bali villages to build, maintain, and benefit from their own waste management systems. Plastic Pollution Coalition spoke with Sean Nino Lotze founder of the company Eco-Mantra and one of the founders of the community movement Merah Putih Hijau.

What are the waste challenges facing Bali and the 763 villages?

Between Mantra and MPH we have managed over 11,000 tons of materials. As more hotels and more facilities join the program and go online, more materials get redirected from going to landfill. Have you been able to scale the program? What do you need in order to do so?

We are still going to wait on that. I don’t want scale to just scale, I don’t want our projects to be mainly about finance and investors. MPH is currently being funded by local hotel owners and local enterprises like Give Cafe that are donating their profits to us.

We are in need of larger donors to help us scale and build more facilities. What I have realized is that a network of functioning and community owned facilities will eventually lead to a local tipping point. The star facility managers, elevate the poor dogs, building a network of facilities is building a community of like minded individuals. Our network facility managers are well educated and goal oriented. They are working to reduce waste to landfill and keeping plastic out of the rivers.

What is your vision for the future of the program?

We have an MOU with the Mayor of Gianyar, Bali to build 20 facilities in the coming years.  This is going to be our next milestone and focus point. Currently our program is managing 1 ton of materials for less than 20$/ton, that is 2,200 pounds for 20$.

We hope the public will understand that building functioning and cost effective infrastructure is ultimately what will keep the trash out of our landfill and out of the sea. We have the technical team and know how and we have a vision to continue building a network of MPH facilities. MPH is changing the waste management landscape to a material management landscape and we will continue expanding on these design principles because they make socio-economic and financial sense.

At the same time it is absolutely essential that the U.S. and other major resin producers really turn off the tap and reduce the amount of plastics being produced. Policy and industry need to create a thriving market for recyclables and scale down primary plastics production.

A monumental public sculpture that aims to shed light on the impact of plastic waste in our ocean and inspire Indonesians to take action to stem the tide of plastic pollution at the local and national level was unveiled last week in Sanur, Bali.

“Baruna Murthi” is made entirely made of waste materials and inspired by the Balinese tradition of Ogoh-ogoh.  The art piece was launched to mark World Environment Day 2018 and as part of UN Environment’s multi-city art installation all carrying the theme “Beat Plastic Pollution.”

Artwork ranges from abstract to whimsical to cultural. In Hong Kong a giant 400-kilogram sphere of melted plastic will make landfall in Central, while in Auckland a bus-sized windsock created from plastic bags will hang at the city’s Eastern Viaduct. In Bangkok, visitors to Central World mall will be able to pass through 7 massive gates made from tens of thousands of plastic bags. 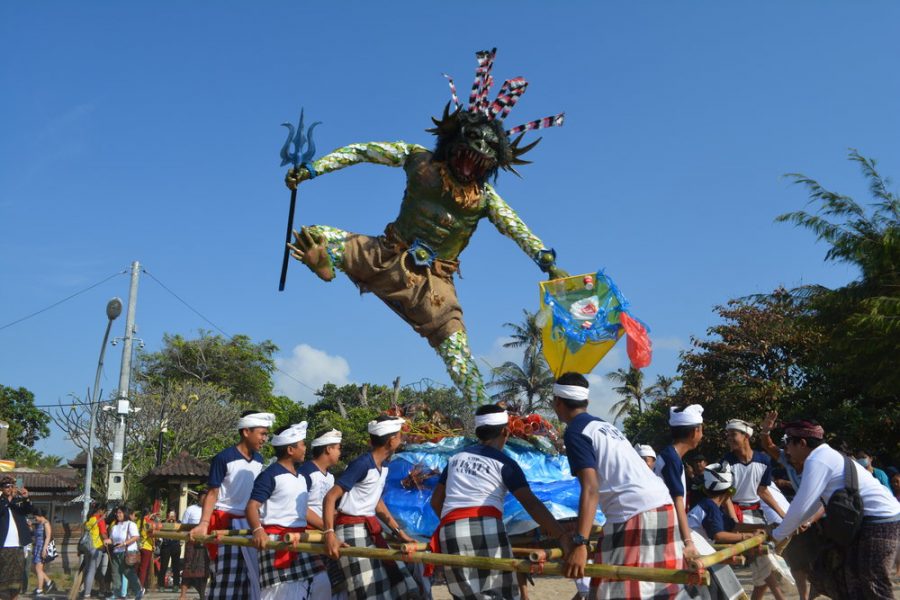 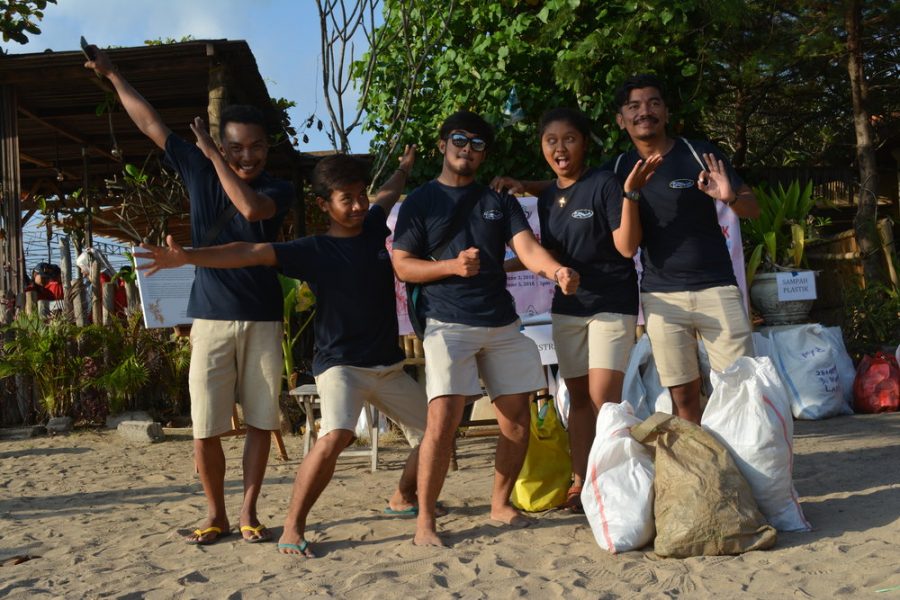 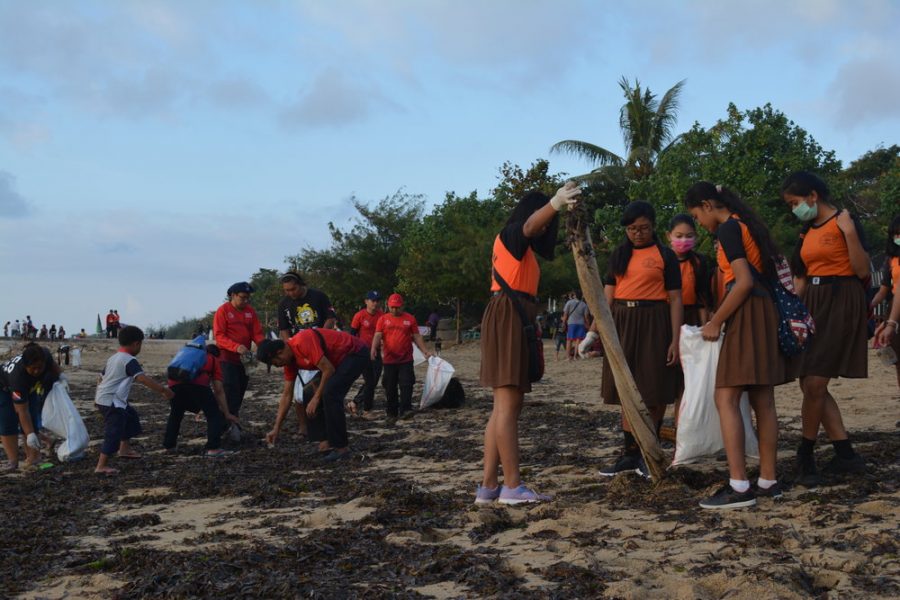 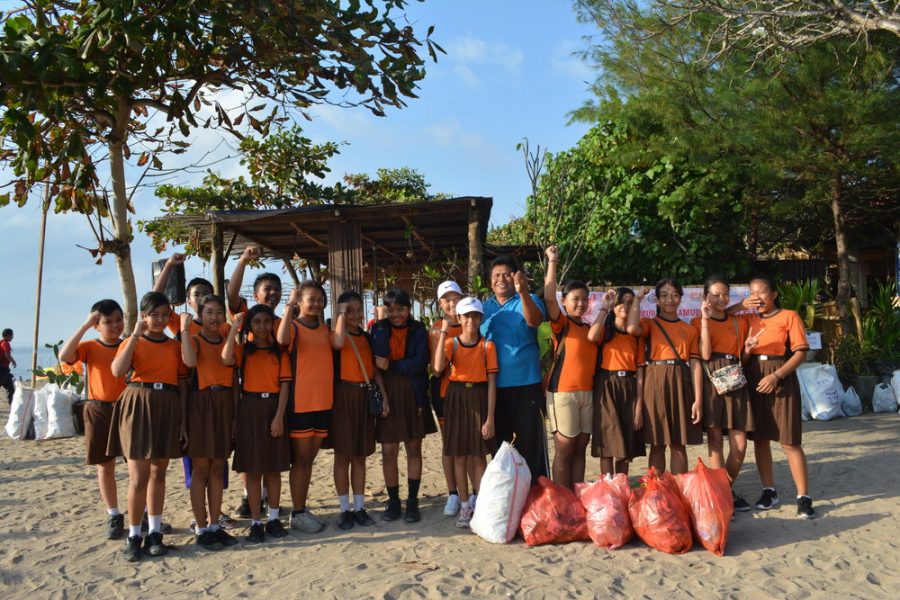 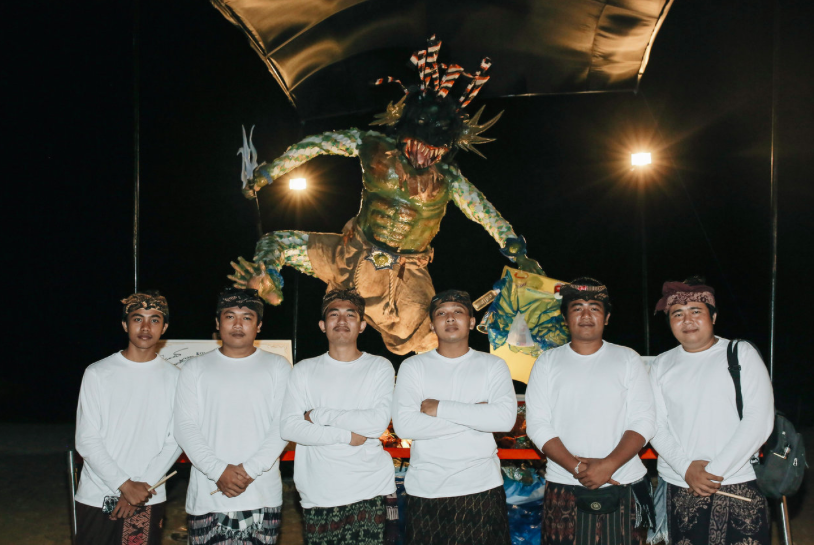 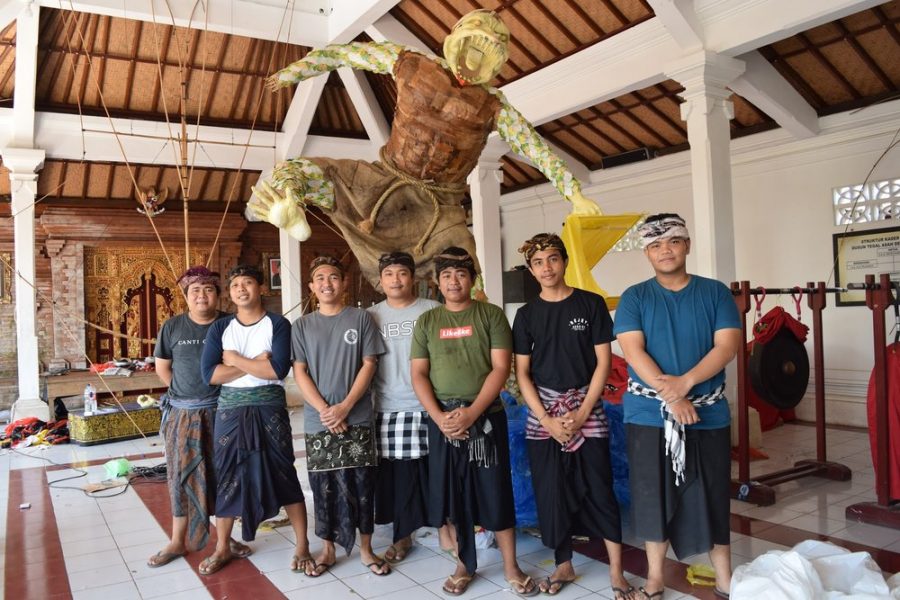 Based on current research an estimated 8 million metric tons of plastic waste enters the ocean every year. Around 60 percent of this land based plastic waste comes from just five countries, China, Indonesia, the Philippines, Thailand and Vietnam.  While Indonesia is the second highest contributor, estimated to leak up to 1.29 million metric tons of plastic into the ocean, it is also the second biggest producer of fish and seafood products worldwide which can cause potential hazards not only to marine life but also to human health when fish and seafood contaminated with micro plastic is consumed by humans.

“We are working with all sectors to raise awareness about the impact of plastic pollution in the ocean and our marine life,” says Rili Djohani, CTC Executive Director. “We need deliberate action from all sectors and stakeholders to address plastic pollution as it is a local, national and global problem. We hope that Baruna Murthi’s story and significance will inspire more people to care for our oceans and reduce their consumption of single use plastic.”

The Sanur Community Youth Group (Karang Taruna Sanur Kajah), who has won various Ogoh-ogoh competitions in the past, is leading the creation of “Baruna Murthi” using common waste materials such as plastic bottles, detergent packaging, and plastic cups.

Drawing on Balinese culture and mythology, the sculpture is a depiction of “Baruna” – the Balinese God of the Sea who is furious because of all the trash and plastic pollution in the ocean. Due to his wrath, Baruna has transformed (Murthi) his face into a giant Lionfish (Ikan Barong) to send the message to humans to stop destroying the ocean that gives so much to those on land.

“I want to engage the people, whether they are locals or visitors, to not litter especially in beach and coastal area, to use less plastic material and be more mindful in taking care of the environment,” says Wedhana.

Born in 1995, Wedhana grew up in Sanur and began his artistic pursuits when he was in high school. He learned to make ogoh-ogoh from his local community youth group and has since made 7 ogoh-ogoh sculptures in the last 10 years.

By representing the sculpture in the form of Baruna Murthi, Wedhana hopes that it can be a reminder for the public that the ocean is not a big trash bin. He said that although Bali maybe small, it is part of a larger ecosystem and what happens here affects the ocean that connects us all.

UN Environment is asking visitors to the installations to pledge on social media how they will help stop plastic waste. People can post a photo to Instagram, Facebook or Twitter with the hashtag #BeatPlasticPollution to show how they are making a difference, and tag their friends to join the movement.

After the public display, the sculpture moved to CTC’s Center for Marine Conservation in Sanur, Bali. The sculpture will be a permanent exhibit open to the public, where it will serve as an educational tool for schools as well as for local and international visitors reminding them of their own plastic consumption and how to reduce plastic waste in their personal life.

Coral Triangle Center is a local non-profit organization based in Bali with a regional scope and global impact. CTC provides education and training to make sure that marine protected áreas within the world’s epicenter of marine biodiversity are managed effectively. CTC supports on-the-ground conservation programs through our learning sites in Nusa Penida in Bali and the Banda Islands in Maluku. CTC aims to expand its outreach and impact through its Center for Marine Conservation in Bali, which will serve as a center of excellence for marine conservation training programs and outreach activities to influence approximately 1.5 million people by 2020 to protect and care for the oceans and those that depend on it. Visit coraltrianglecenter.org.

Step into the beautiful world of Komodo Island—one of the remote islands of Indonesia—where the pristine natural environment brims with life, but amidst the flora and fauna grows an invasive species: plastic pollution.

“It’s pretty jarring seeing a very beautiful fish swimming alongside a bag [made] of plastic,” says Leilani Gallardo of the Coral Triangle Center in the new video. Gallardo joined a team of artists, scientists, and filmmakers on a recent expedition from Bali to Komodo Island to document plastic pollution in the region.

The film shows plastic pollution in the open water and along shoreline, in landfills, in backyards, and in shallow waters. “I’m struck here by what we’re seeing,” says Ann Luskey, Chief Aquatic Officer for Seatime, Inc. “There wasn’t a single place we went that wasn’t filled with plastic debris.”

Another member of the expedition, Dalton Ambat, a naturalist and divemaster, has been a guide in this area for 20 years. He sees major changes with more and more plastic entering the environment. “It’s really breaking my heart because my daughter just started diving, I worry that in couple years she won’t see the things I’ve seen.”

In the Western world we say ‘just throw it away.’ There is no away. It goes somewhere, and this is where it’s going.

Student Charlotte Weir talks about filling bags with plastic garbage on the expedition and not being able to collect it all. “It made me realize: we can’t solve this problem by collecting all the plastic that’s in the oceans,” she says. “We need to stop it at the source.”

Photographer Pete Oxford, who shot beautiful images of plastic pollution underwater says it’s time for us to wake up to the problem of plastic pollution. “In the Western world we say ‘just throw it away.’ There is no away. It goes somewhere, and this is where it’s going.”

Pamela Longobardi, a professor at Georgia State University and founder of Drifters Project, says it was devastating to see plastic pollution hitting the “most beautiful spot I’ve ever seen on the planet,” but she gives a hopeful message for the future: “We’re at a point in our evolution where we’re moving into a new phase…. We have the opportunity to make changes, and even little by little and day by day these changes are going to spread like wildfire.”

The equivalent of one garbage truck of trash is dumped into our oceans every minute.  Take Action: Take the Pledge to Refuse Single-Use Plastic.