This week the Honolulu City Council passed Bill 40, which will implement the strictest ban on single-use plastic utensils, straws, and polystyrene foam containers in the State of Hawai‘i.

The latest draft of Bill 40, by Councilmembers Joey Manahan and Tommy Waters, evolved after many meetings, both public and private, and many hours of written and oral testimony.

Bill 40 was introduced back in July by Councilmember Manahan after discussing this issue for many years. He said he took action to protect health, life, and property and preserve the order and security of the City and its inhabitants.

“In all my years of dealing with the plastic issue, over a decade now, I’ve never seen a more fair process to both proponents and opponents. While there’s still a huge divide between the two groups, we listened to all sides when crafting Bill 40. I appreciate the wave of support from the proponents including those in the food industry, who may have not supported the bill, but cared enough to provide their input. The result is evident in the legislation we passed today. Most of all, I want to thank the youth leaders, our keiki, who really were a source of inspiration to me, my true north, my guiding star, my hoku‘lea.”

“At a fundamental level, this is about protecting ourHawai‘i nei. We know that plastic pollutes our parks and beaches, we know that it ends up in our food and bodies, and we know that it will never ever go away. We owe it to our keiki who have mobilized in the thousands, yes thousands, in support of Bill 40. Of course we owe so much to Councilmember Manahan, who not only introduced Bill 40, but has been working in this area for over a decade. I also want to mahalo Chair Emeritus Menor and Councilmembers Elefante and Pine for previously introducing various bills that attempted to address components of what Bill 40 stands for today. Both the Office of Climate Change, Sustainability and Resiliency and the Office of Council Services provided their expertise to help move Bill 40 through Committee. I want to thank the many community organizations that have spurred this conversation, including Surfrider, Zero Waste Oahu, B.E.A.C.H., and Sustainable Coastlines Hawaii.

I also want to thank the many small businesses that led the way and voiced support for this measure and mahalo those in the industry that worked with us to make Bill 40 a measure that won’t harm local businesses. I especially want to mahalo the many youth that came out to take a stand for their future – including the dozens of students from Hahaione Elementary School and Dyson Chee, who has really proven to be a leader. They really are the reason we are doing this.”

Thousands submitted testimony and testified since the bill was first introduced. Students of all ages and from all over Oahu have rallied behind this legislation, testified in strong support, pleaded with the Council to think of them, be brave and show society that we have the will and ability to adapt.

For more information on this bill and the Honolulu City Council, please visit the City Council.

Take the pledge! Say no to single-use plastics.

The first time I saw the beach, I was enchanted.  I was resting on a beach in Florida and ran my hands through the sand, saying “beach” for the first time.  I splashed in the waves with my dad and said hello to the tiny fish jumping out of the water.  It was right at that moment that I fell in love with the ocean and all of the life that it supports.  However, that beautiful beach I visited as a toddler might not exist by the time I’m a mother.

Recently, I was visiting Hawaii at Kahuku Beach in Oahu and was shocked at how much plastic washed up along the shoreline there.

Joining my dear friend, Robbie Bond, age 11 and founder of Kids Speak for Parks, and also the hardworking organization called Sustainable Coastlines Hawaii, we cleaned up about a half-mile stretch of beach in about 2 hours.  Us kids used handmade screens to filter out the sand and retain plastic particles while other volunteers picked up the larger pieces with their hands.  We collected about 500 pounds of plastic in a short period of time!

What is most sad is that this beach is cleaned often by volunteers, and yet we know the plastic is expected to return.  On one hand, cleaning up the beach seemed frustrating because we know unless we tackle the source of the problem and turn off the tap, plastic will wash ashore again.  But on the other hand, we can’t just leave the plastic there either! 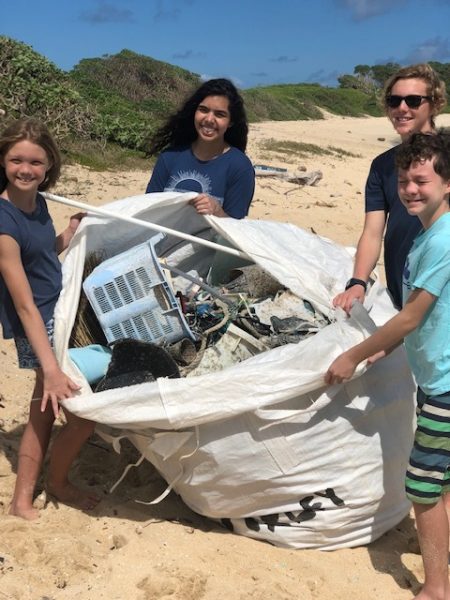 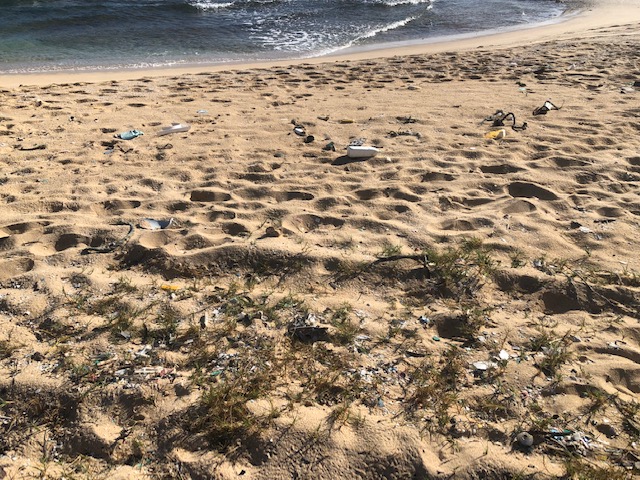 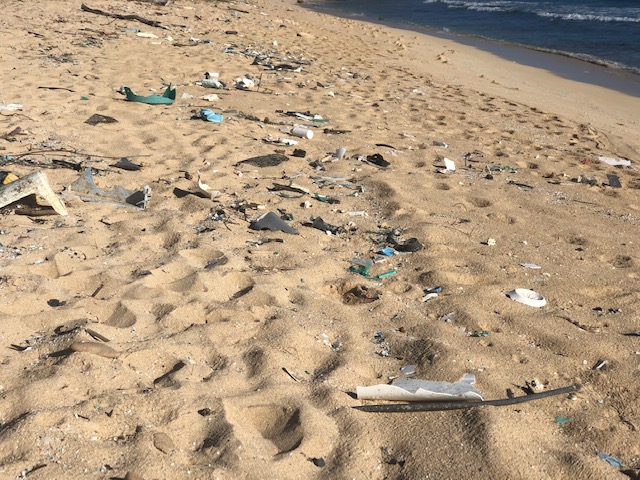 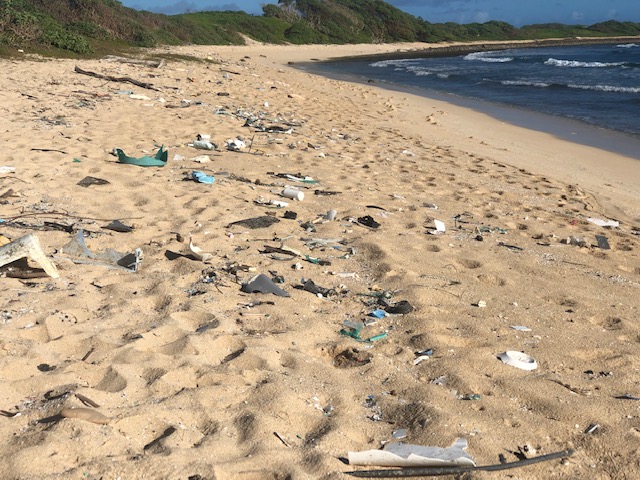 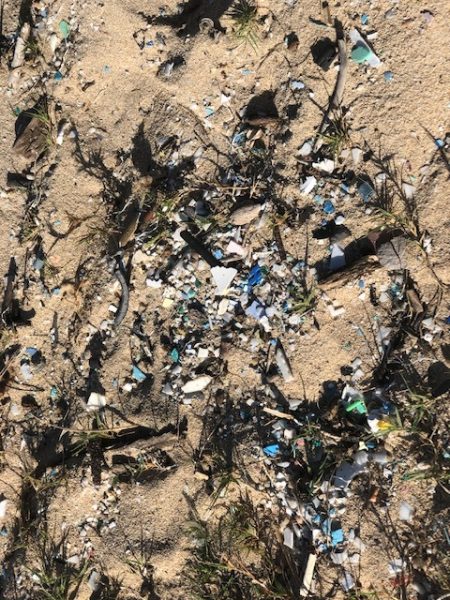 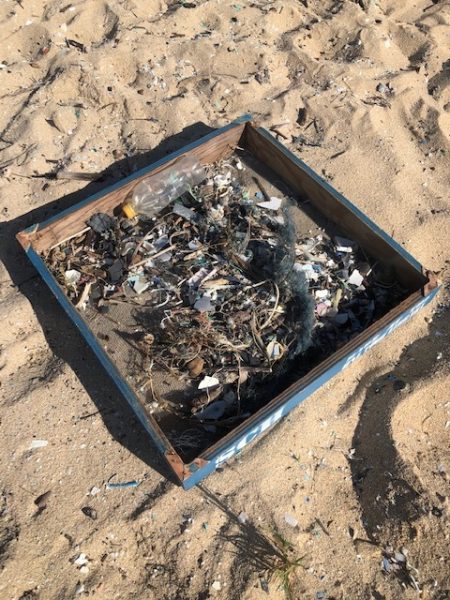 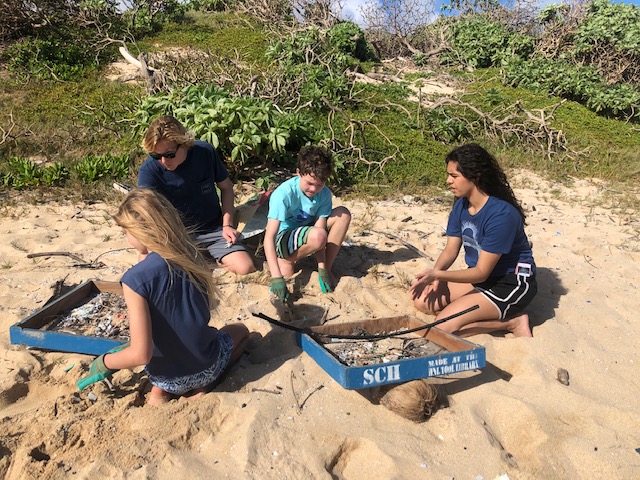 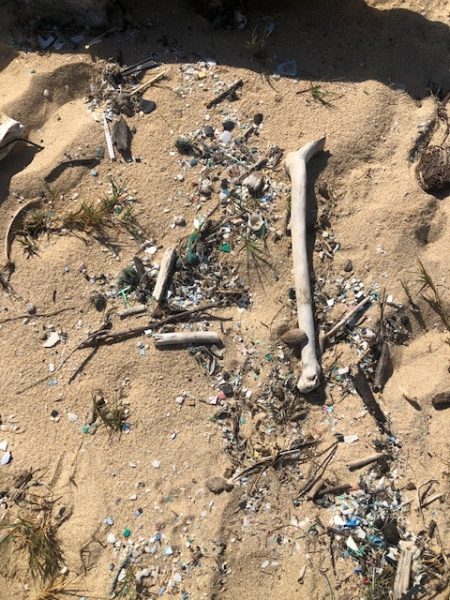 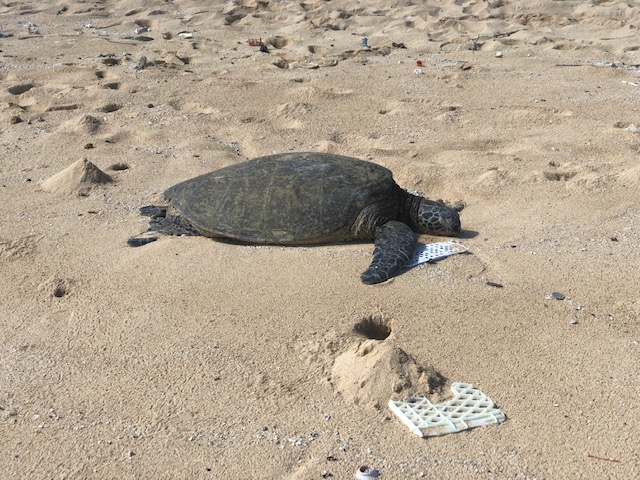 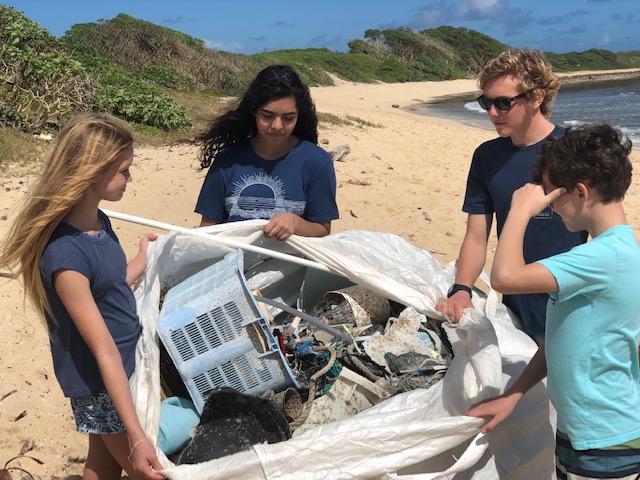 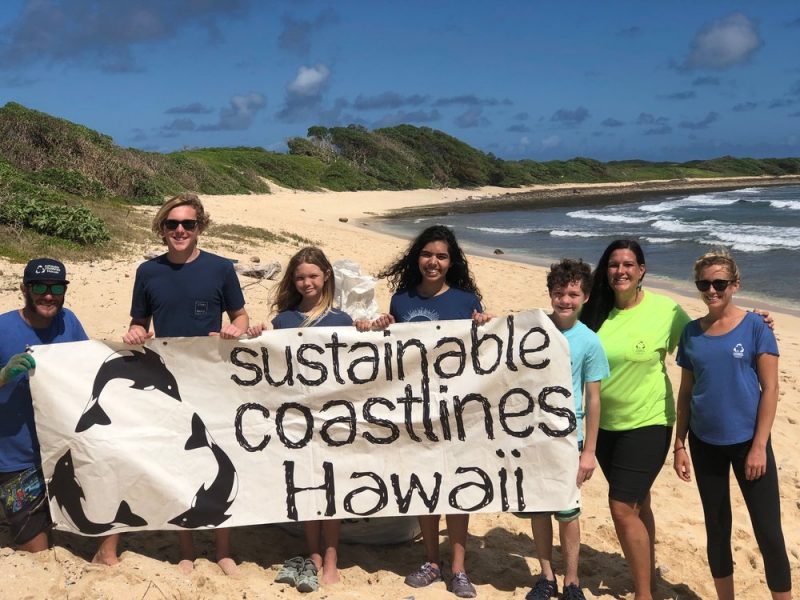 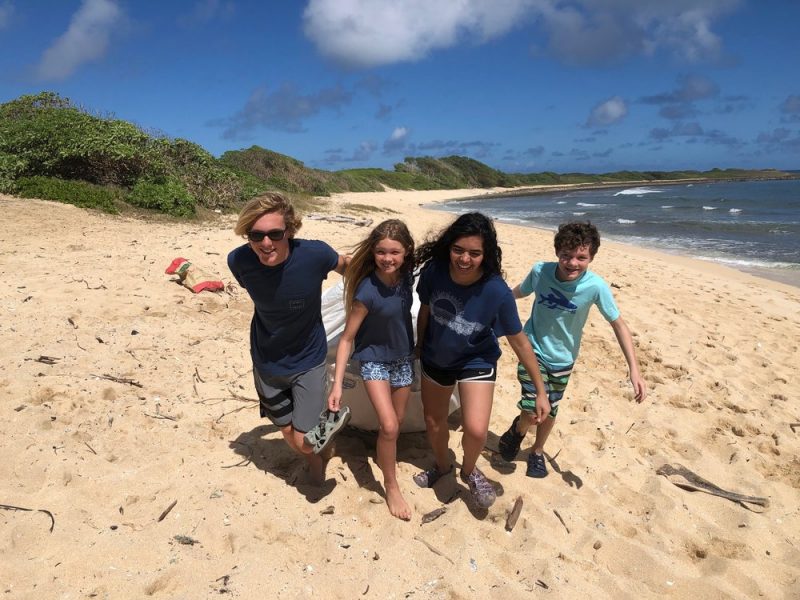 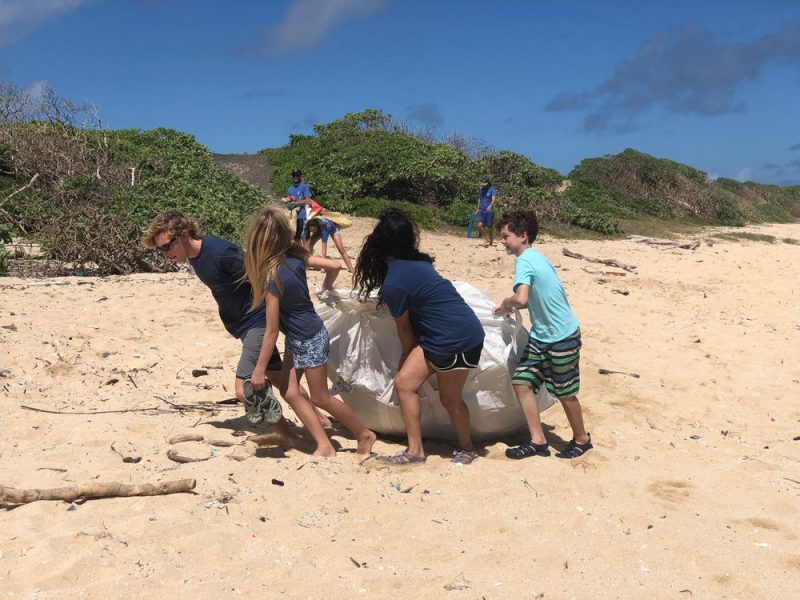 What did we find?  The most common items we saw today were bottle caps, pieces of fishing nets, and toothbrushes.  There were also a lot of unrecognizable plastics.  One of the interesting things I picked up was the bottom of a plastic bottle that had dozens of little bite marks taken from it.  It was apparent that fish were eating from this plastic bottle!  I’m glad I am vegan and no longer eat fish!

In fact, we saw four large sea turtles resting on the beach.  One of them was resting on a big piece of plastic trash.  It illustrated for me that plastics are a common threat to animal species in our oceans.

What didn’t we see?  We didn’t see anything that wasn’t made of plastic because any biodegradeable products had already broken down. The problem with plastic is that it isn’t biodegradable, meaning it can’t be broken down into organic compounds. Instead, it breaks up into small, toxic microplastics that are eaten by fish.

Our dependence on plastic products needs to end if we want to protect our oceans and our beautiful beaches. We all need to see what we can do as citizens and consumers to reduce our plastic consumption, to recycle properly, and to voice our concerns loudly to politicians and business leaders about this growing environmental crisis.

No matter where we live, the health of the ocean affects all of us. By taking the steps to curb our plastic consumption and “turn off the tap,” we can help ensure that future toddlers will have an ocean to fall in love with.

Hannah Testa is a sustainability advocate, international speaker, and founder of Hannah4Change, an organization dedicated to fighting issues that impact the planet. Hannah4Change is a project of Plastic Pollution Coalition.

Learn how to add a brand audit to your next beach cleanup.

Researchers from the University of Hawai’i at Mānoa School of Ocean and Earth Science
and Technology (SOEST) discovered that several greenhouse gases are emitted as common
plastics degrade in the environment.

Mass production of plastics started nearly 70 years ago and the production rate is expected to double over the next two decades. While serving many applications because of their durability, stability and low cost, plastics have deleterious effects on the environment. Plastic is known to release a variety of chemicals during degradation, which has a negative impact on organisms and ecosystems.

Polyethylene, used in shopping bags, is the most produced and discarded synthetic polymer globally and was found to be the most prolific emitter of both gases.

Additionally, the team found that the emission rate of the gases from virgin pellets of LDPE
increased during a 212-day experiment and that LDPE debris found in the ocean also emitted greenhouse gases when exposed to sunlight. Once initiated by solar radiation, the emission of these gases continued in the dark.

“We attribute the increased emission of greenhouse gases with time from the virgin pellets to photo-degradation of the plastic, as well as the formation of a surface layer marked with fractures, micro-cracks and pits,” said lead author Sarah-Jeanne Royer, a post-doctoral scholar in the Center for Microbial Oceanography: Research and Education (C-MORE) at the time of this investigation. “With time, these defects increase the surface area available for further photo-chemical degradation and therefore contribute to an acceleration of the rate of gas production.” 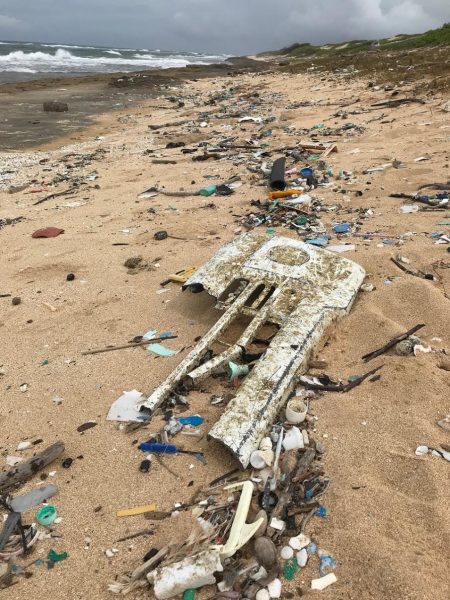 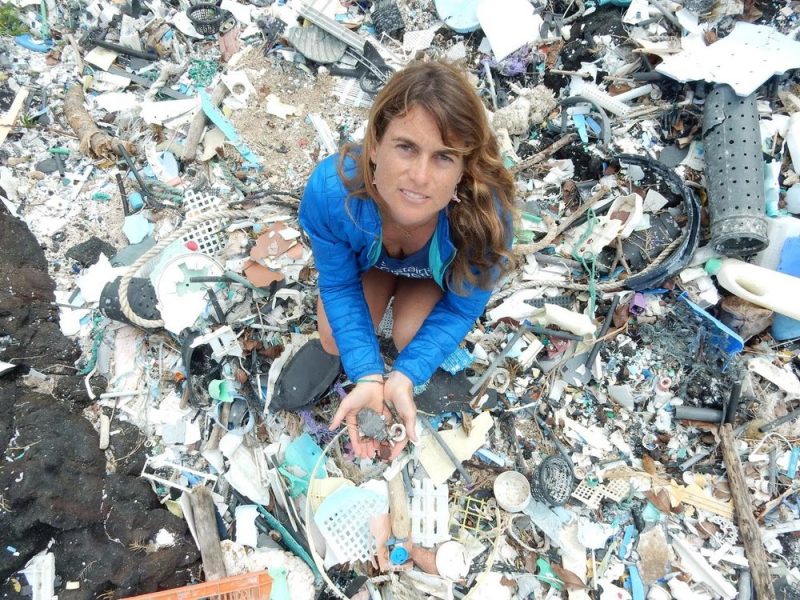 Sarah-Jeanne Royer, PhD., a postdoctoral research fellow at the University of Hawaii, at Kamilo Point, HI 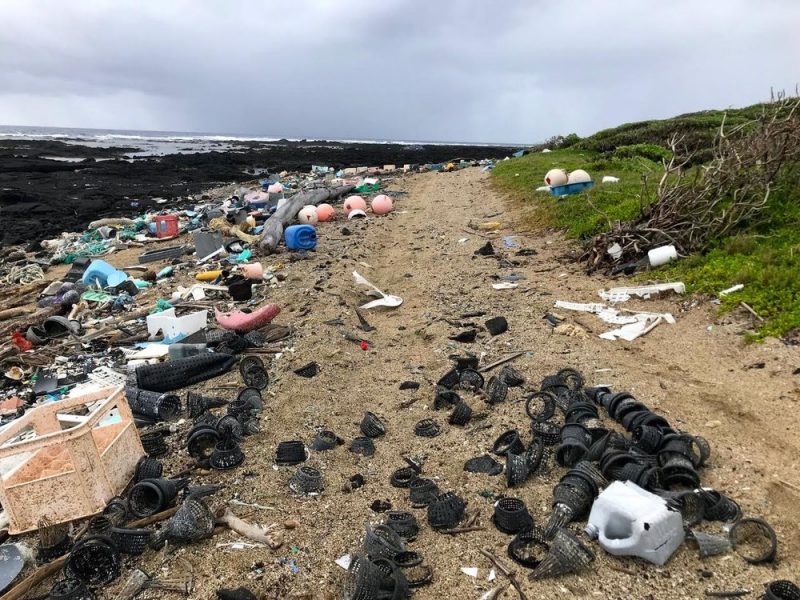 It is also known that smaller particles, termed ‘microplastics,’ are eventually produced in the environment and may further accelerate gas production.

“Plastic represents a source of climate-relevant trace gases that is expected to increase as more plastic is produced and accumulated in the environment,” said David Karl, senior author on the study and SOEST professor with C-MORE. “This source is not yet budgeted for when assessing global methane and ethylene cycles, and may be significant.”

“Considering the amounts of plastic washing ashore on our coastlines and the amount of plastic exposed to ambient conditions, our finding provides further evidence that we need to stop plastic production at the source, especially single use plastic,” said Royer.

Now, Royer is working to develop estimates of the amount of plastic exposed to the environment in oceanic and terrestrial regions, globally, in order to constrain the overall greenhouse gas emissions from plastics.

The U.S. state Hawaii is continually ranked among the most beautiful places in the world, but locals know that their beaches and fragile ecosystems face increasing threats from plastic pollution. According to the Hawaii State Department of Transportation, plastic bags and polystyrene or “Styrofoam” are the top two contributors to the waste stream.

Now the Hawaii State Legislature is considering a bill that would ban polystyrene containers from eateries in the state. If signed into law, the ban would take effect Jan. 1, 2018.

About 80 percent of food vendors in Hawaii use polystyrene for takeout, estimates Doorae Shin, Plastic Free Hawaii Program Manager for the Kōkua Hawaiʻi Foundation. “These containers are designed to be used for a few minutes, but they will last hundreds of years in the natural environment.”

Polystyrene is lightweight and easily flies out of trash bins and landfills, where it breaks apart into little pieces and is often mistaken for food by marine animals. Polystyrene foam leaches a byproduct—styrene—into land and water, and the EPA has established styrene as a possible human carcinogen. 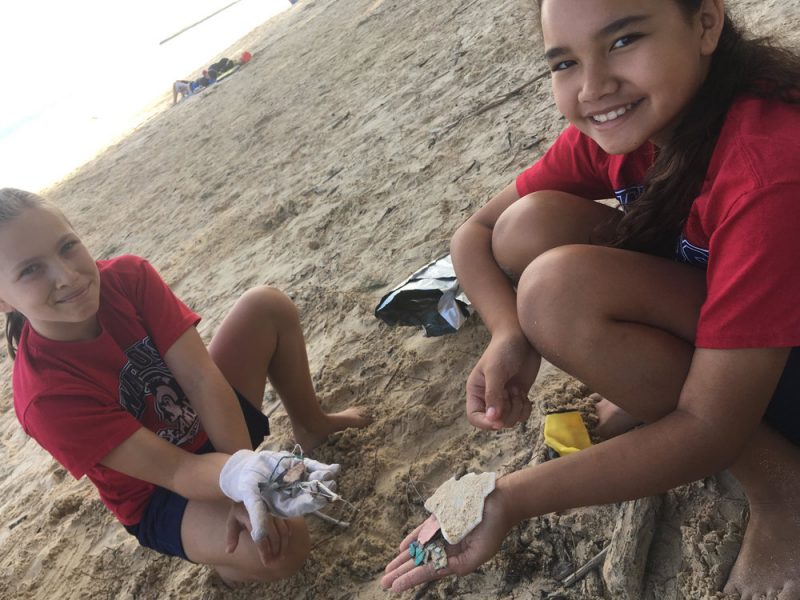 Scenes from a beach cleanup. Photos by Kōkua Hawaiʻi Foundation 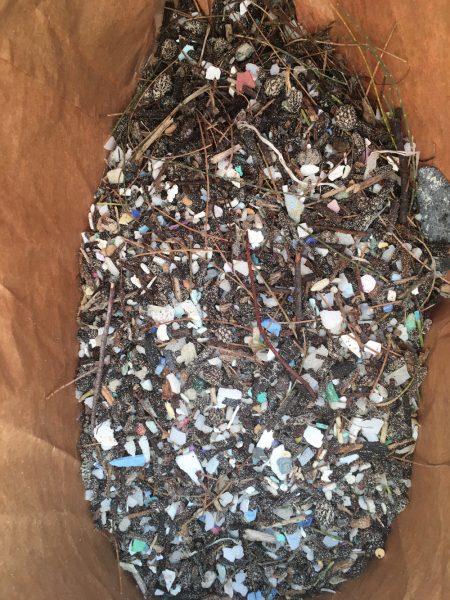 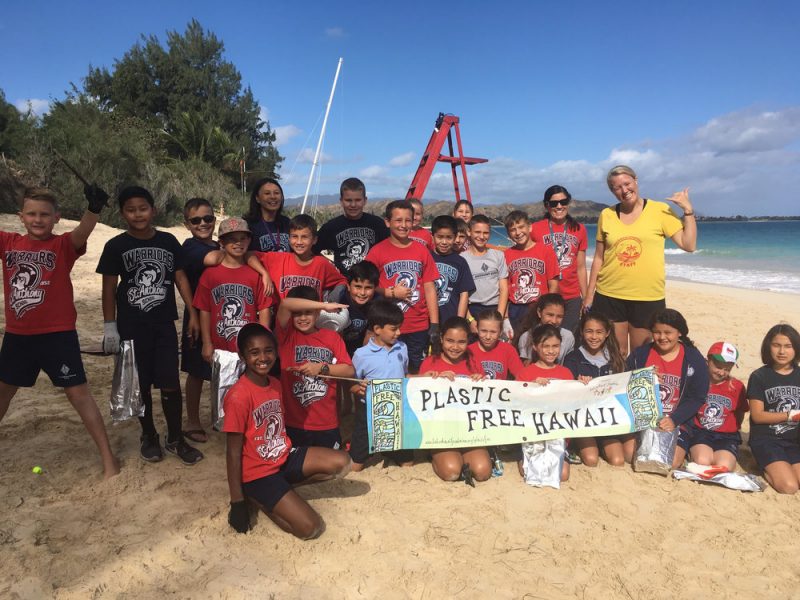 Hawaii does incinerate a portion of plastic waste, but this approach significantly impacts the environment. Burning plastic releases potent greenhouse gasses, and according to the U.S. Environmental Protection Agency, burning polystyrene emits even more carbon dioxide equivalent than other plastics. Less than 1 percent of polystyrene is recycled in the U.S. and zero percent is recycled locally in Hawaii.

“Banning polystyrene foodservice is a no-brainer because it is an unnecessary and unsustainable product,” explains Shin. “The convenience of using foam does not outweigh the many consequences. A polystyrene ban is a low-hanging fruit to begin mitigating the issue of plastic pollution in Hawaii.”

Learn how to start a polystyrene ban in your town.