We recently returned from the beautiful island country of Palau, located in the western Pacific Ocean, where Plastic Pollution Coalition co-hosted an expedition with Oceanic Society, Drifters Project, and Heirs to Our Oceans with support from Mission Blue, to work together with local Palauans to explore potential solutions to plastic pollution.

The Plastic Pollution Forum, hosted by Heirs to Our Oceans, was held at the end of the week, where representatives from three local high schools came together with visiting Heirs from the U.S., business leaders, educators, and elected officials to brainstorm solutions. Dr. Sylvia Earle was a special guest speaker at the Youth Forum and spoke to the great beauty of Palau as a mighty island country in the vast blue still unexplored Pacific Ocean.

The students were able to set some benchmarks for ways to reduce plastic pollution that they want to see come to fruition within the next year. One idea was to take a look at each of their own school’s plastic footprint and ways to reduce it.

Palau has a long history of advocating for the environment. The Rock Islands are a UNESCO World Heritage Site and Marine Protected Area, and the country banned single-use plastic bags last year. Over the summer, Palau’s President Tommy Remengesau signed an executive order banning single-use plastics from all government offices and agencies. In early November, Palau became the first country to ban harmful sunscreens that are toxic to coral reefs.

“Palau was surprisingly clear of plastic in the water—nothing like the amounts we saw and removed in Indonesia in 2016,” said Pamela Longobardi of Drifters Project and a PPC Support Artist Ally. “Several reasons could account for this: it’s a much smaller island chain, and Palau has made immense conservation steps in creating the vast marine sanctuary around it, which in turn has perhaps made the population more environmentally conscious.”

As part of the expedition, our groups participated in a beach cleanup and brand audit hosted by Heirs to Our Oceans with local Palauan students and business leaders. A fascinating find, in addition to the 77 single-use plastic cups labeled Aqua by Danone, was an old Coca-Cola bottle cap extolling it’s “quality product.” (Coca-cola was the number one plastic polluting company identified in the recent #breakfreefromplastic global cleanup and brand audit.)

As Pam noted, we found most of the plastic pollution in the forested shores and mangroves of the islands, which unfortunately makes it less visible and therefore less likely to be cleared.

“The brand audit showed identifiable names on the items,” said Wayne Sentman of Oceanic Society. “It was also interesting to see that one of the items we frequently see in Indonesia beach clean ups—single-use servings of water labeled Aqua and produced by Danone were also abundant on the beaches of Palau. We wonder if this plastic has a local source or has washed up in Palau from Indonesia.”

Pam led a “forensic beach cleaning” training with the group, which was followed by plastic retrieval of material from hundred-meter ropes and nets down to micro-scale plastic, then sorting, counting, removing colored material for the creation of the art piece, and finally loading the bags onto the boats for transport.

“One of the most meaningful parts of the trip for me was working with the Palauan Heirs and citizens on a new version of the State of Koror flag made out of ocean plastic collected in a mass beach cleaning on a remote island,” said Pam. “We worked in the Public Works woodshop where dozens of kids from local high schools, park rangers, public works employees, local artists, and expedition guests all stopped by to contribute to its construction. The completed work was presented at the Plastic Pollution forum in the State House of Koror, where it will be permanently displayed. For me, it signified Palau’s commitment to becoming a Plastic Free Island. It was also shown to the President of Palau and the UN Ambassador of Palau, who were both very excited by the work.” 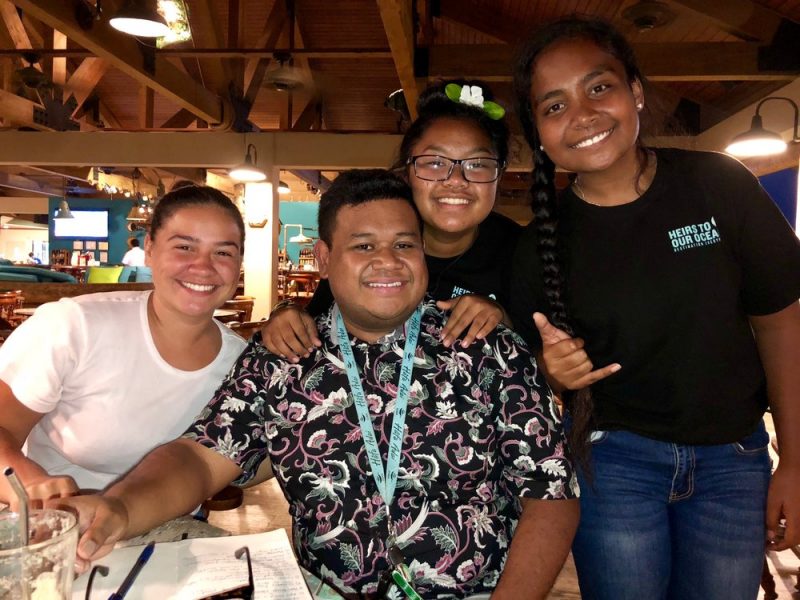 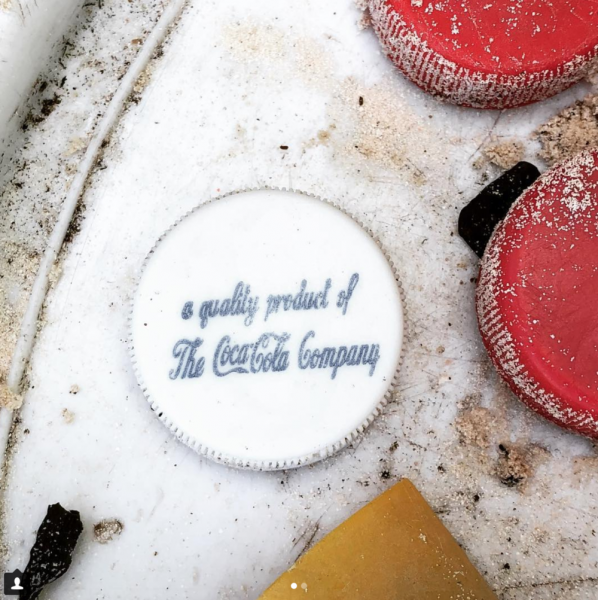 Coca-cola bottle cap found during the beach clean up and brand audit. Photo by Dianna Cohen. 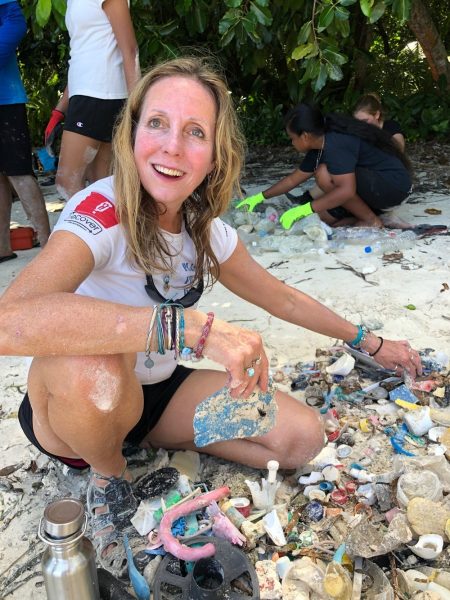 Pamela Longobardi of Drifter’s Project and a PPC Supporting Artist Ally collects beach plastic during the clean up and brand audit. Photo by Wayne Sentman. 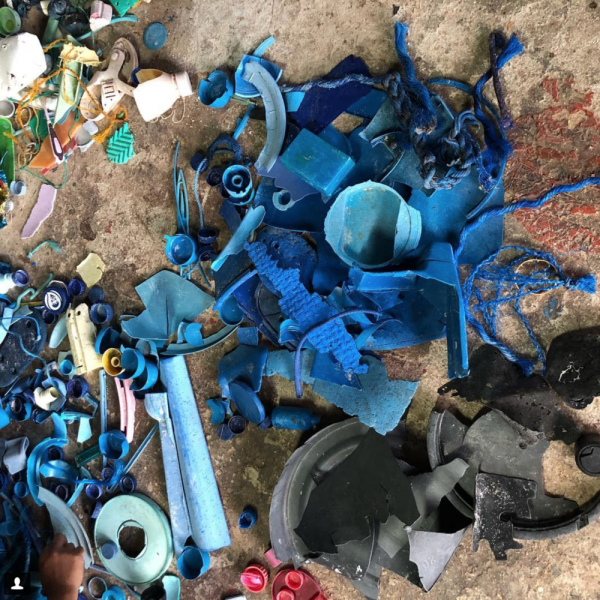 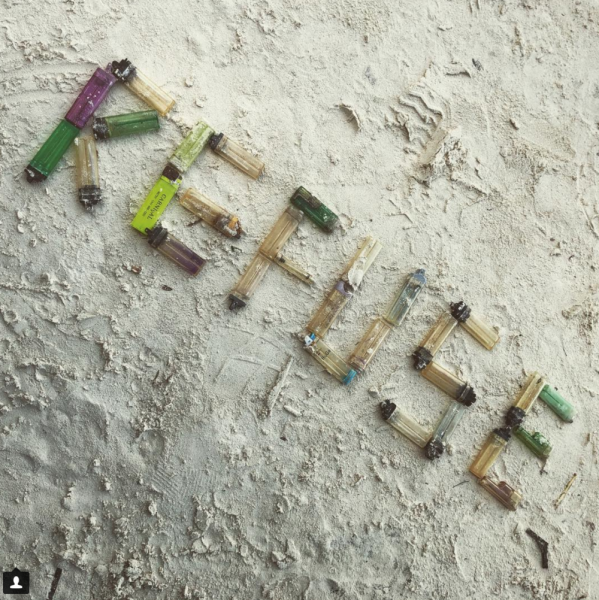 Plastic lighters collected on the beach. Photo by Dianna Cohen. 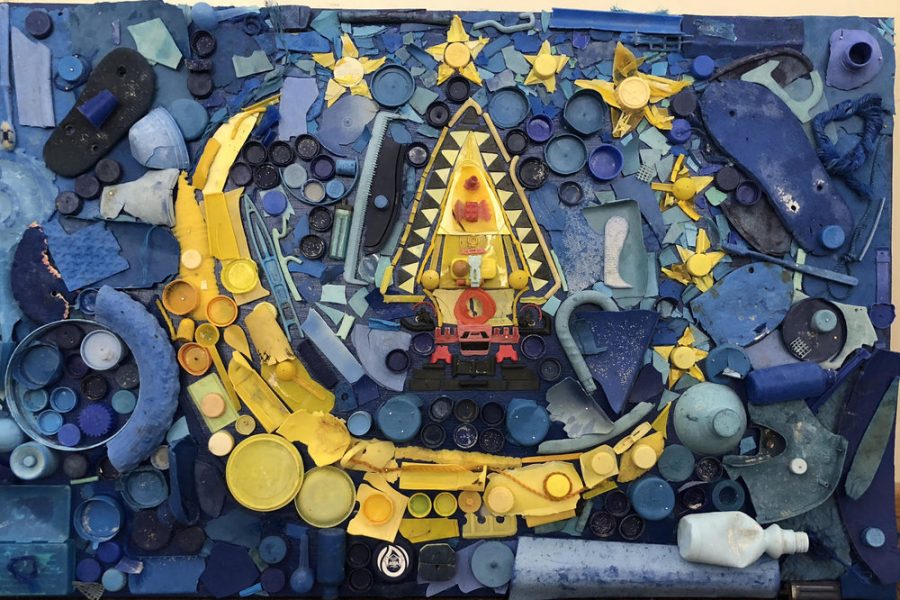 Art made from beach plastic, recreating the State of Koror flag. Photo by Dianna Cohen. 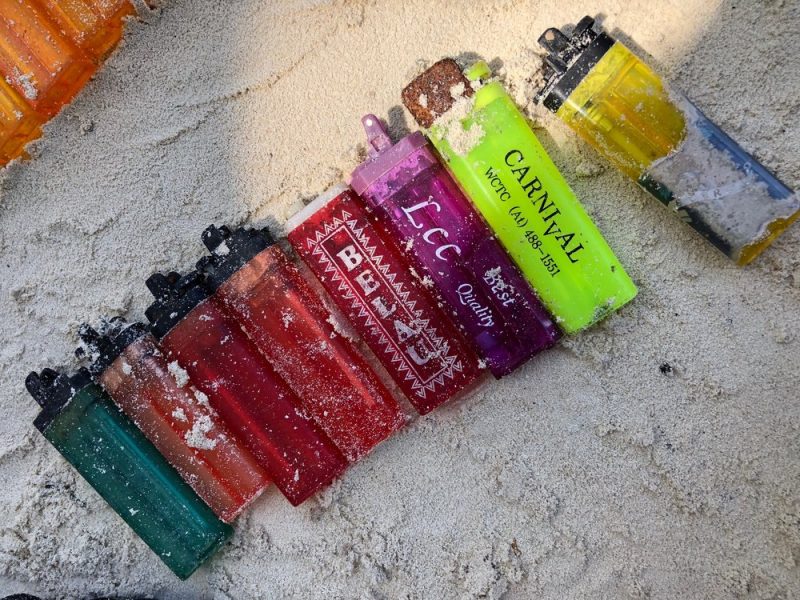 Plastic lighters collected from the beach. Photo by Wayne Sentman. 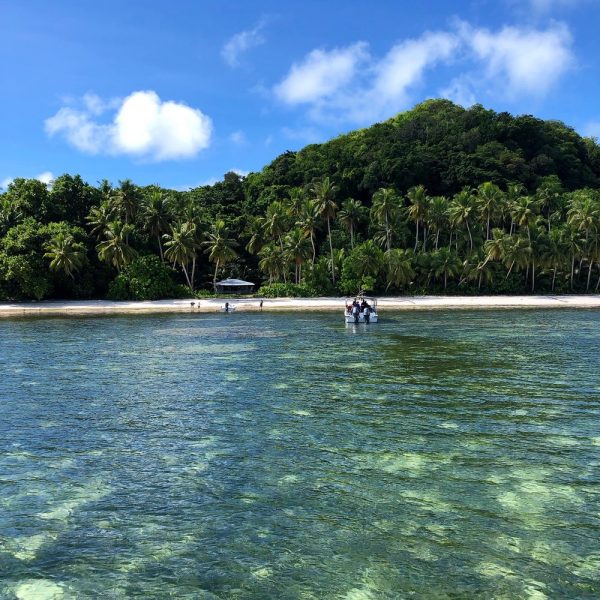 The people of Palau have been working to stop plastic pollution from harming their local environment for more than 10 years. Photo by Wayne Sentman. 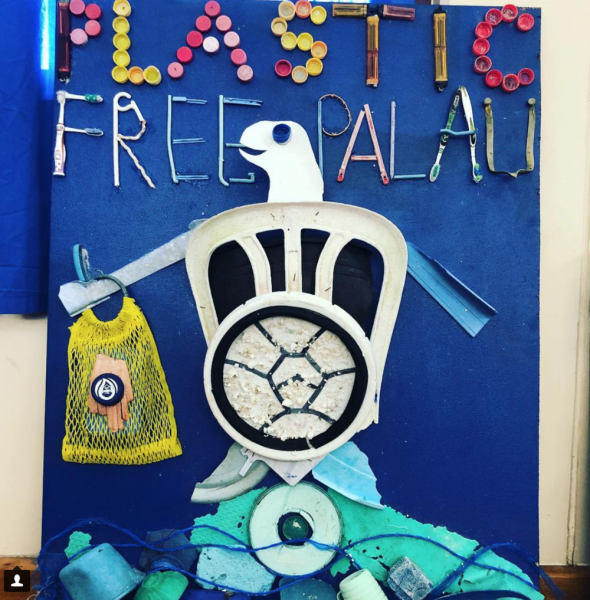 Plastic Free Palau sign made by students from plastic collected from the beach. Photo by Dianna Cohen. 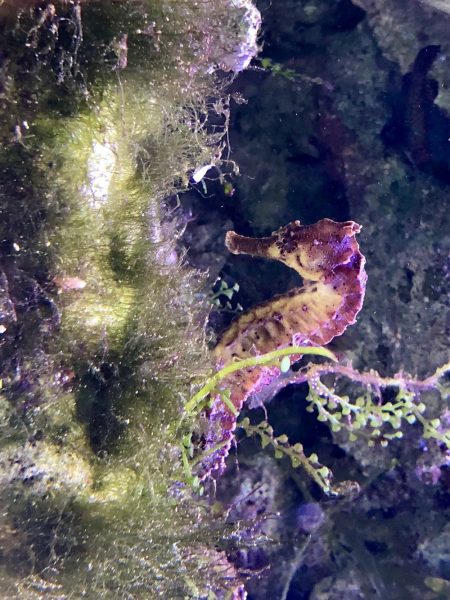 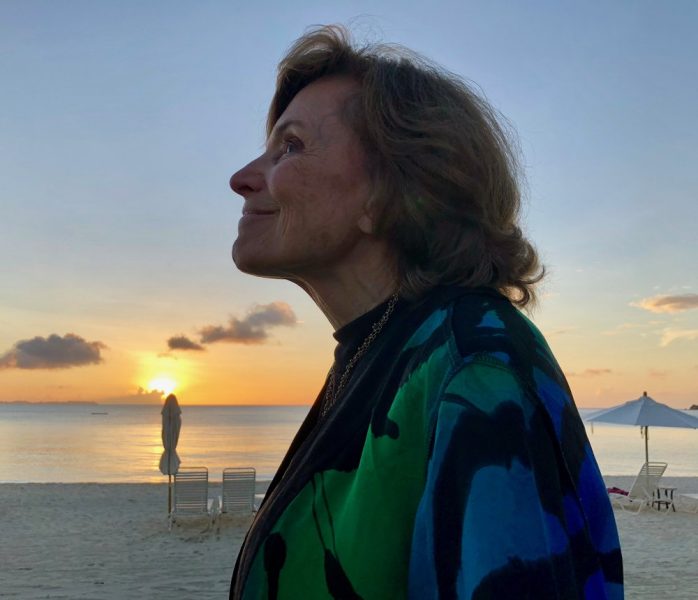 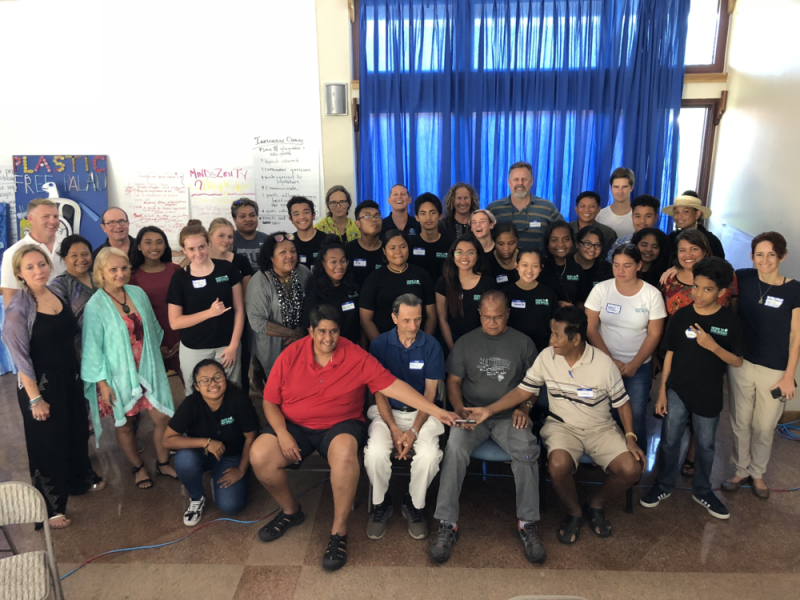 Wayne was similarly encouraged by the community and Palauan Heirs to Our Oceans members. “Over our time there it became obvious to us all that many of the young woman and men we worked with and got to know are destined to become leaders in their community. As a group, they were already organizing successful efforts to reduce single-use plastics in local stores and schools, and in general promoting awareness about the importance of protecting their marine environment.”

In addition to being inspired by the youth, we appreciated the opportunity to speak with the President Remengesau and his ministers about the plastic pollution reduction achievements the country has made so far and to brainstorm ideas together as Palau prepares to host the Our Ocean conference 2020.

We commend the Palauan government, the local Heirs, and business and community leaders and members for their great work and commitment to protect their environment, and we look forward to continued partnership toward a world free of plastic pollution.