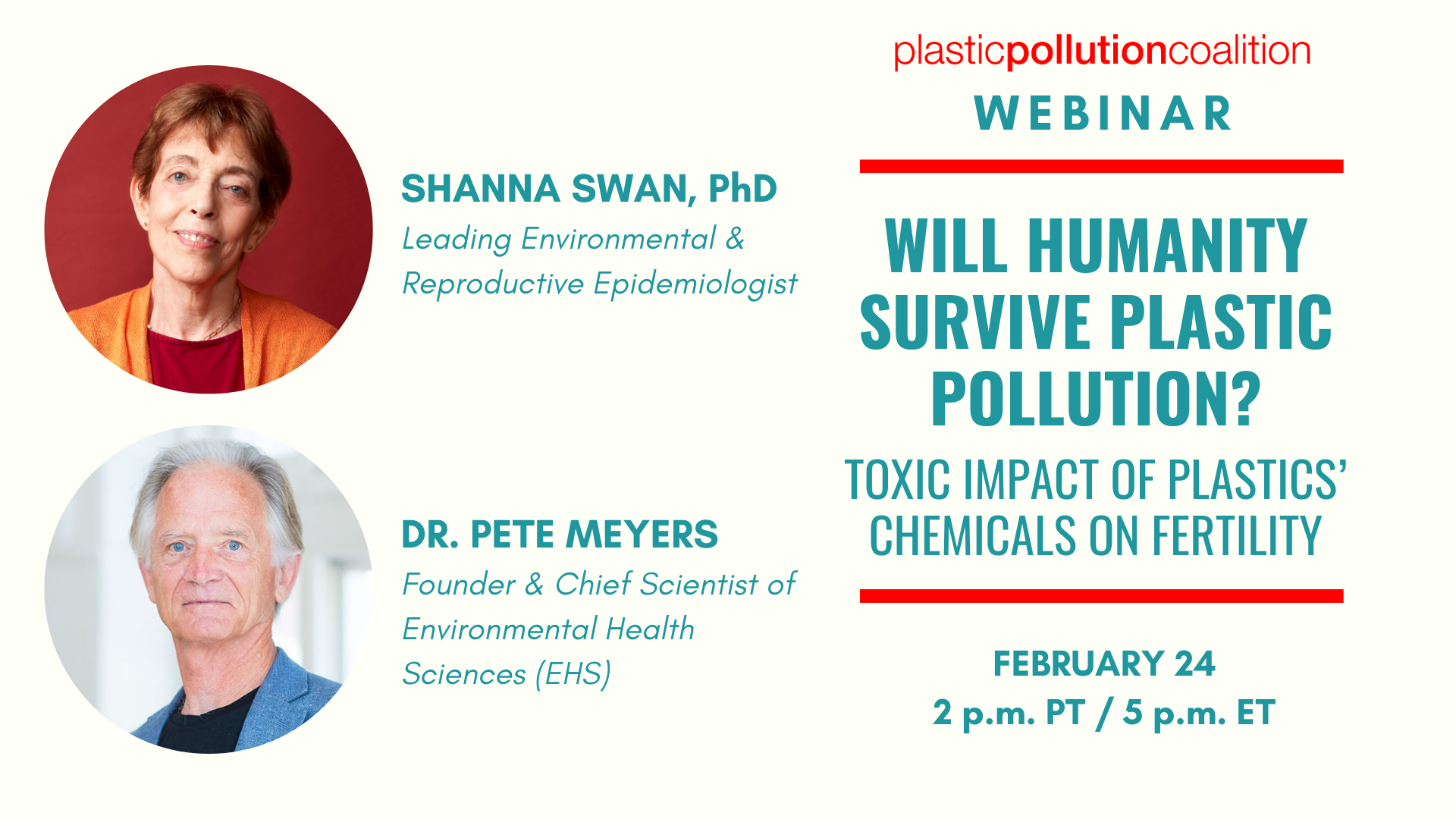 Join us for a conversation with Shanna Swan, PhD, leading environmental and reproductive epidemiologist, and author of upcoming book Count Down: How Our Modern World is Threatening Sperm Counts, Altering Male and Female Reproductive Development, and Imperiling the Future of the Human Race, and Dr. Pete Myers, Founder and Chief Scientist of Environmental Health Sciences.

The webinar will be moderated by Dianna Cohen, Co-Founder & CEO of Plastic Pollution Coalition, and will focus on how plastics and endocrine-disrupting chemicals are contributing to decreasing sperm counts and other negative effects on human sexuality and fertility in both women and men.

Shanna H. Swan, PhD, is an award-winning scientist based at Mt. Sinai and one of the leading environmental and reproductive epidemiologists in the world. Dr. Swan has published more than 200 scientific papers and has been featured in extensive media coverage around the world. Her appearances include ABC News, NBC Nightly News, 60 Minutes, CBS News, PBS, BBC, PRI Radio, and NPR, as well as in leading magazines and newspapers, including Newsweek, The Washington Post, USA TODAY, Time, US News & World Report, The Guardian, Bloomberg News, New York Post, Chicago Tribune, Daily News (New York), Los Angeles Times, HuffPost, Daily Mail (London), New Scientist, Mental Floss, Mother Jones, New Telegraph, Euronews, and the National Post. She is author of the new book Count Down: How Our Modern World is Threatening Sperm Counts, Altering Male and Female Reproductive Development.

Pete Myers is founder and Chief Scientist of Environmental Health Sciences, a non-profit organization that promotes public understanding of advances in scientific research on links between the environment and health. Dr. Myers holds a doctorate in the biological sciences from UC Berkeley.

While director of the W. Alton Jones Foundation (1990-2002) he co-authored “Our Stolen Future,” a best-seller that explores how contamination threatens fetal development.

Myers has received multiple major national and international awards, including: the Laureate Award for Outstanding Public Service from The Endocrine Society (2016), the “Champion of Environmental Health Research Award (2016) from the National Institutes of Health, and the “Distinguished Service Award (2017) from the Sierra Club.