Emma Bridgewater is probably England’s best known pottery designer, famous for her distinctive lines plateware, mugs, milk pitchers, kitchen towels – all manner of items for the kitchen, and for indoor and outdoor dining. Visiting London a couple weeks ago I learned that there was a certain unusual Bridgewater product I should see— “something having to do with plastic” said my London-based sister. Imagine how my jaw dropped when I saw this: a “Real Butter Dish” with this message on the lid: “Say A Definite No To Plastic!”

I immediately bought three: one for me, one for my sister, and one for PPC’s Dianna Cohen. The butter dish is part of the very popular “Black Toast” line of wares – but is the only one with this environmental message. I had hoped for a full breakfast set with plate, mug, egg cup, and marmalade spoon, this being England after all. More to the point, I wanted to know the story behind the design and manufacture of this single item. What is Bridgewater’s interest in the plastic pollution? Why a butter dish? Are more “Say a definite no to plastic” pottery wares coming? 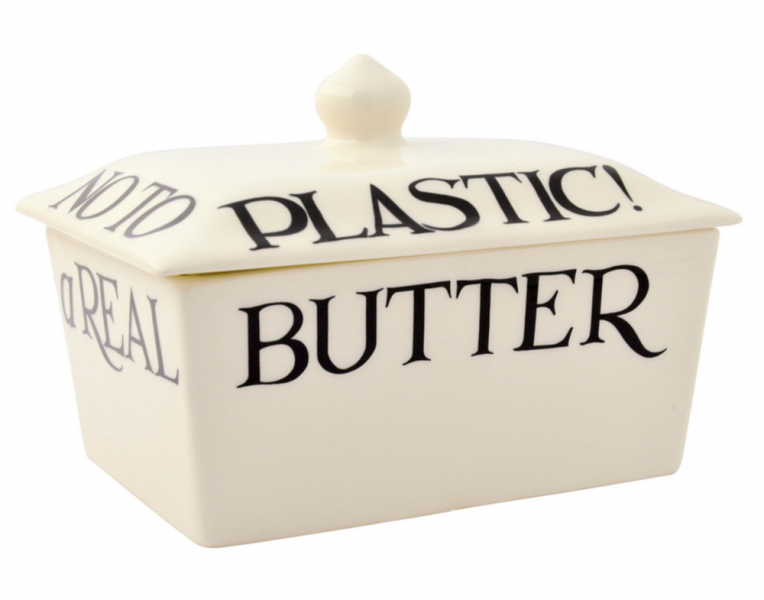 “A Real Butter Dish … Say A Definite No To Plastic!” 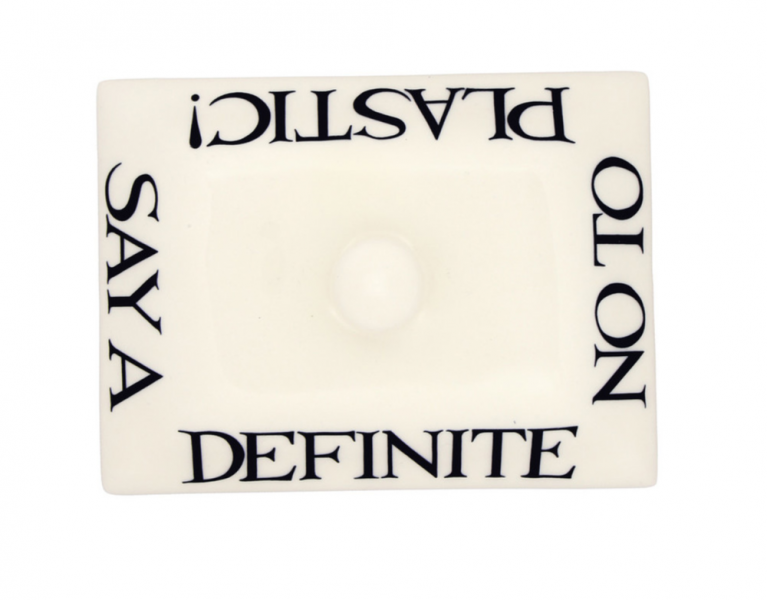 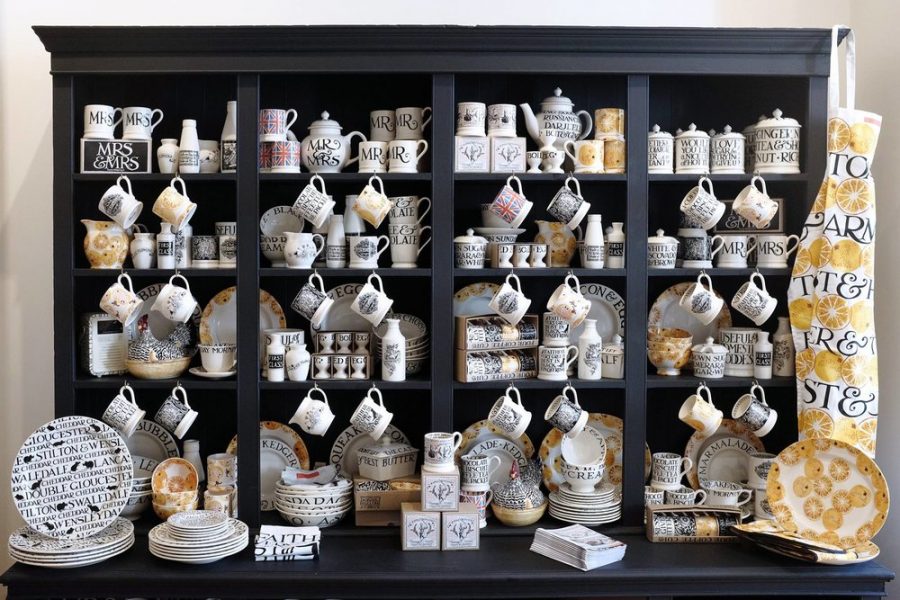 The first question is quickly answered: Emma Bridgewater, one of the UK’s most recognizable designer for the home (especially the kitchen and bedroom), is also the president, since last year (2016) of the Campaign for the Protection of Rural England (CPRE), which since 1926 has worked “locally and nationally to protect, shape and enhance a beautiful, thriving countryside for everyone to value and enjoy. Our members are united in their love for England’s landscapes and rural communities, and stand up for the countryside, so it can continue to sustain, enchant and inspire future generations.”

Ms. Bridgewater was seen at the time as an unusual choice for leader of the CPRE, but in addition to being a successful, creative entrepreneur and business manager, she has also been long committed to protection of England’s environmental resources and beauty, and to mindful development of urban and suburb spaces in that context. Bridgewater’s patterns and designs frequently draw from the flora and fauna of the English countryside. My own small but growing collections Emma Bridgewater coffee mug collection features images of popular dog breeds, song and game birds, foxes, badgers, the 60th anniversary of the Queen’s reign (I guess she is part of the landscape too).

Which brings us to plastic.  Like everywhere else in the world plastic has found its way from the most popular to the most remote British coastlines, tangled in hedges, trees, and fencing wire, clogging storm drains and waterways. In an editorial in The Daily Mail on 6 August 2016, Bridgewater introduced herself as the new president – and announced her first campaign: a battle against plastic:

“[A]lmost everywhere I look I see evidence of our casual disregard for what nature has given us: the vast armies of pylons marching out as far as the eye can see; the litter left behind at beauty spots; and – a pet hate of mine – the discarded plastic bottles, whether in hedgerows or bobbing in ponds and lakes. … I sometimes wonder what has become of us that we feel the need to carry water around with us at all times. Is it really necessary? Ten billion plastic bottles are thrown away every year, littering streets and polluting pristine landscapes alike. I want to see this tide of driven back.”

The full editorial presents some facts about the UK’s use of plastic bottles:

·       7 litres of water needed to make one plastic bottles

In the face of this Bridgewater advocates expanding the plastic-bag user-fee to the use of plastic bottles: “Like everyone else, I’ve been thrilled by the transformation brought about by the introduction of the 5p charge for plastic bags, which has caused an 80 per cent reduction in their use.  Now let’s turn that same determination to curing the curse of plastic bottles.”  She would also like to work with local business to support the installation of filling station and water fountains in towns and at tourist sites.

And – why a butter dish? Because in addition to bottles, English consumers buy millions of plastic butter and margarine containers every year—and plunk them into an Emma Bridgewater butter dish. This particular dish, though, is a little smaller: in fact, too small to fit any standard plastic spread container. So – if you want to buy this unique butter dish, you’ll have to buy real butter!

Before plastic became ubiquitous, many kitchen items were made from clay. A new movement called More Clay Less Plastic uses art installations and a Facebook group to bring people back to those roots—inviting others to rethink their everyday utensils, to substitute plastic with sustainable materials, and to find and support artists and craftsman.

Founder Lauren Moreira, who lives in Italy, chose the colander as the icon for the movement because “a strainer is an object that every single household in the world has,” and because it was the first utensil to disappear from ceramic production after plastic came along.

Moreira has shown the exhibition More Clay Less Plastic: Change in Your Hand in ten cities around the world, and the movement is growing. “It’s amazing how little people know about how dangerous plastic pollution is,” she says. “The visitors are attracted to the ceramic utensils, some of which they have never seen before precisely because they were substituted by plastic. We talk about why we are proposing a step back to natural materials and the audience is very interested, especially kids when they see the pictures of the animals trapped in plastic or killed by plastic.” 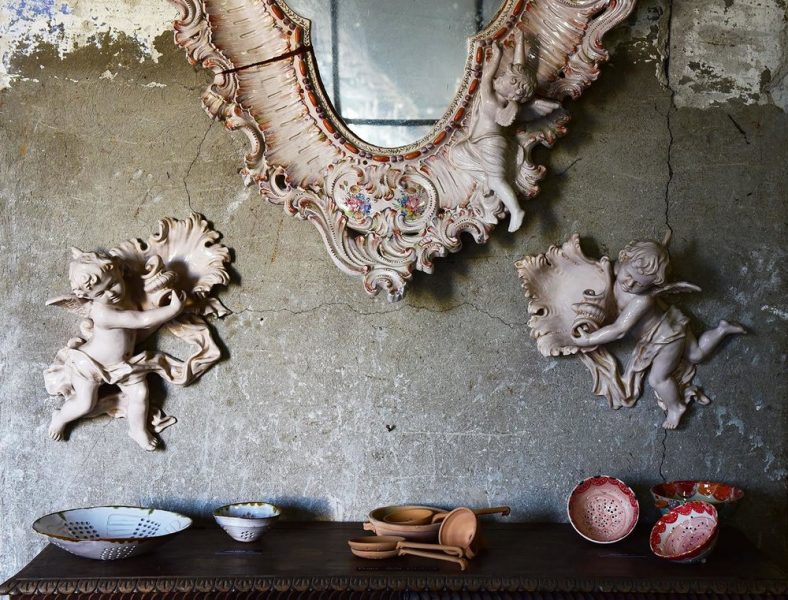 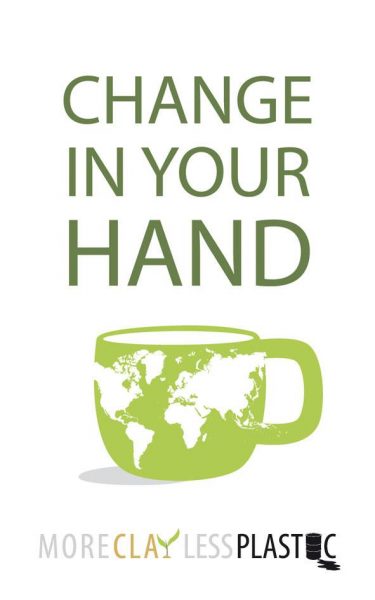 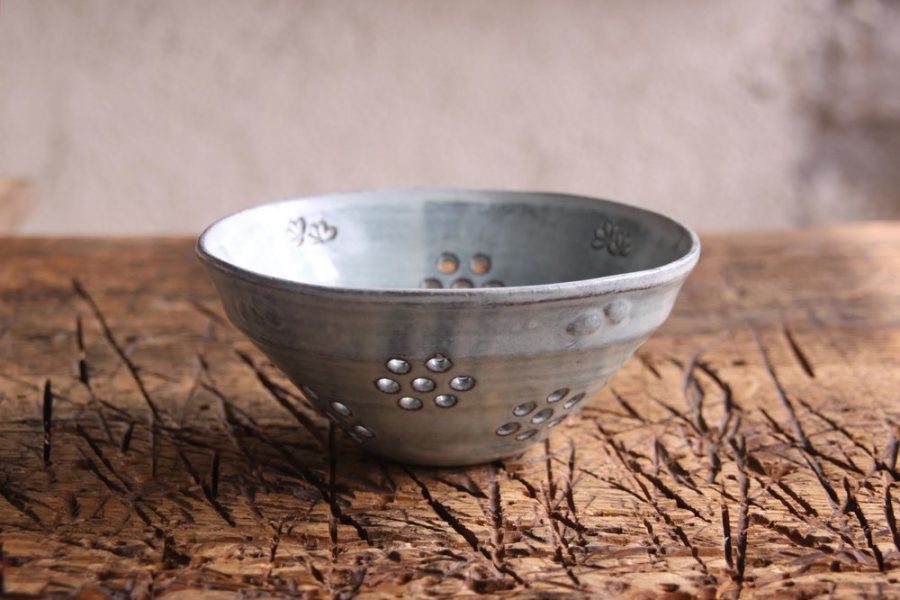 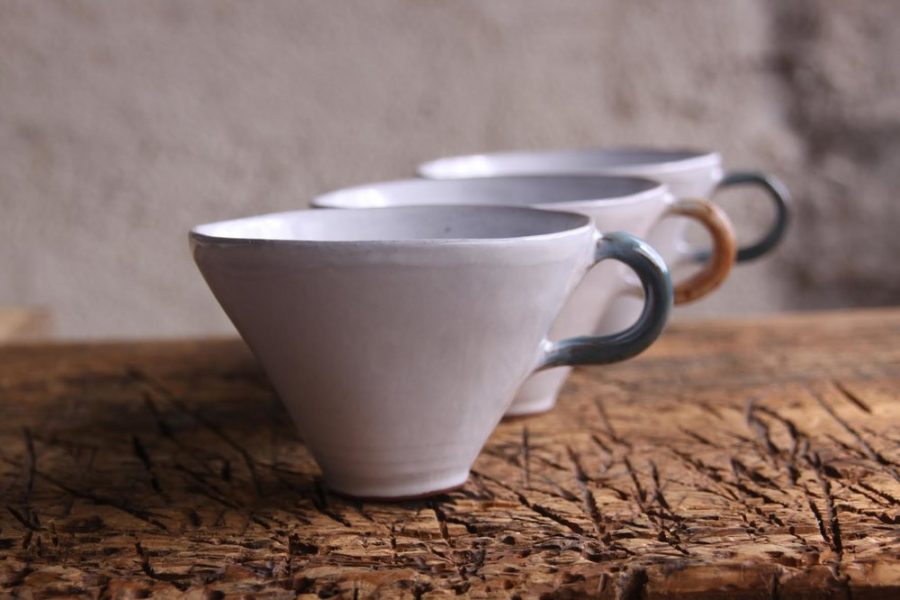 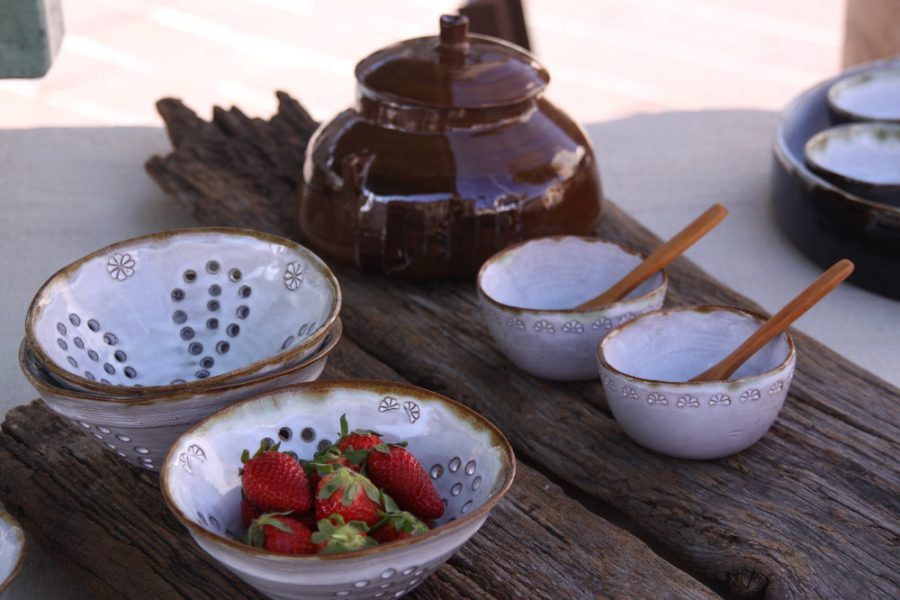 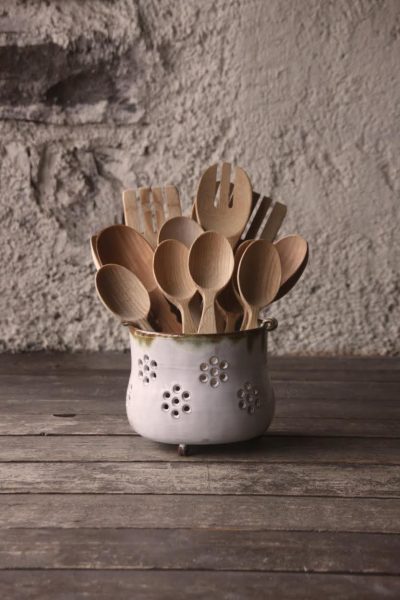 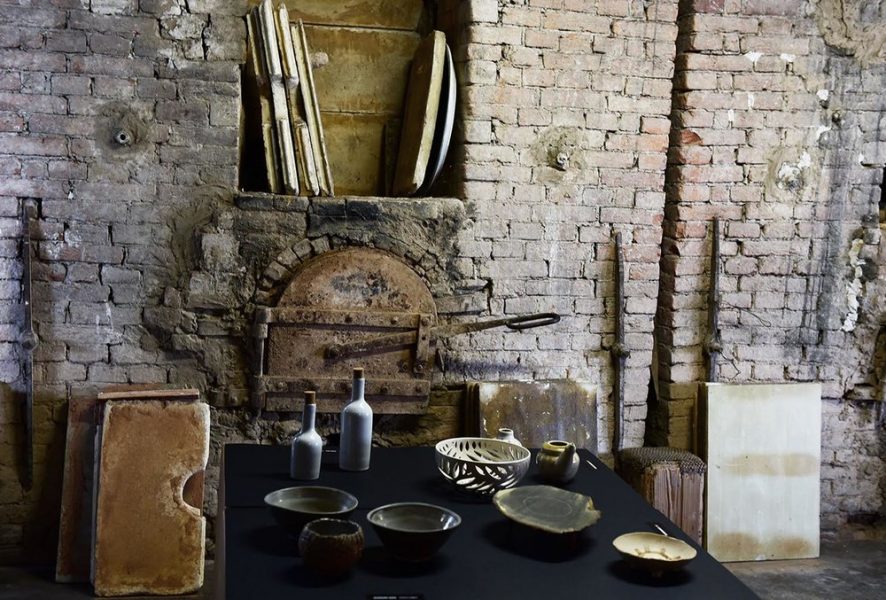 So why is clay a compelling material? “No matter how long a ceramic shard lasts, it will never harm the planet,” explains Moreira. “But what is most important for More Clay Less Plastic is the relation between ceramics and food. We are trying to make people go back to using real objects… Most of the worst plastic is the disposable that goes along with the food industry.”

Moreira, who is a potter herself, uses clay in school workshops with children. “I like to present the project in schools and then invite the students to make their own cup. It has a special value and anything that will be drunk from that cup will taste better!”

The More Clay Less Plastic movement recently culminated in a Less Plastic Day on Dec. 19 to create awareness about the problem of plastic pollution. Moreira collaborated with Blair Folts, from Green Mountain Conservation Group and Karen Payne, a science teacher, to present a screening of ‘Bag It’ at Kingswood Regional High School in Wolfeboro, New Hampshire. The film was followed by a workshop where students made their own shopping bags from old T-shirts.

Moreira also showed Linda Booker’s documentary ‘Straws‘ in Venice, Italy, as part of Less Plastic Day, where the film had great impact. “Venice is the water city and one of the most visited places in the world. Disposable plastic is a problem there for the number of people who visit Venice every day.”

Clay is a means of starting the conversation about plastic pollution.

Her vision for the future of More Clay Less Plastic is all about consciousness. “Clay is a means of starting the conversation about plastic pollution. My plan is to present the project in schools as many times as it will be possible. The division of trash in different bins and recycling was started in my house by my son. I’m convinced that if children understand the problem of plastic pollution they will convince their families to have better habits.”