A new campaign led by Whale and Dolphin Conservation (WDC) called #NotWhaleFood launched today in London, England, and calls for action to protect whales, dolphins, and other marine species from the 13 million tons of plastic pollution that enter our oceans every year.

#NotWhaleFood is backed by UK Television stars and BRITA UK and highlights the fact that 56 percent of all whale and dolphin species in the world have been recorded eating plastic. Since up to 80 percent of the plastic pollution in the oceans originates from land, the #NotWhaleFood campaign launched with an urban beach clean outside the Houses of Parliament this morning.

“The volume of plastic in our seas and the impact it has on beloved species such as whales and dolphins is one of the most pressing environmental problems of our time and something that we should all be profoundly concerned about,” said UK Television star Julia Bradbury, who has publicly backed the campaign. “From carrying reusable water bottles to cutting down our usage of plastic bags, there are so many small changes we can make to have a positive impact. We can’t afford to delay.”

According to WDC, the colossal amount of plastic pollution in our oceans equates to more than the combined weight of every single living blue whale (the largest creature ever to have lived on Earth) and equal to five grocery bags filled with plastic for every single foot of the world’s coastline. 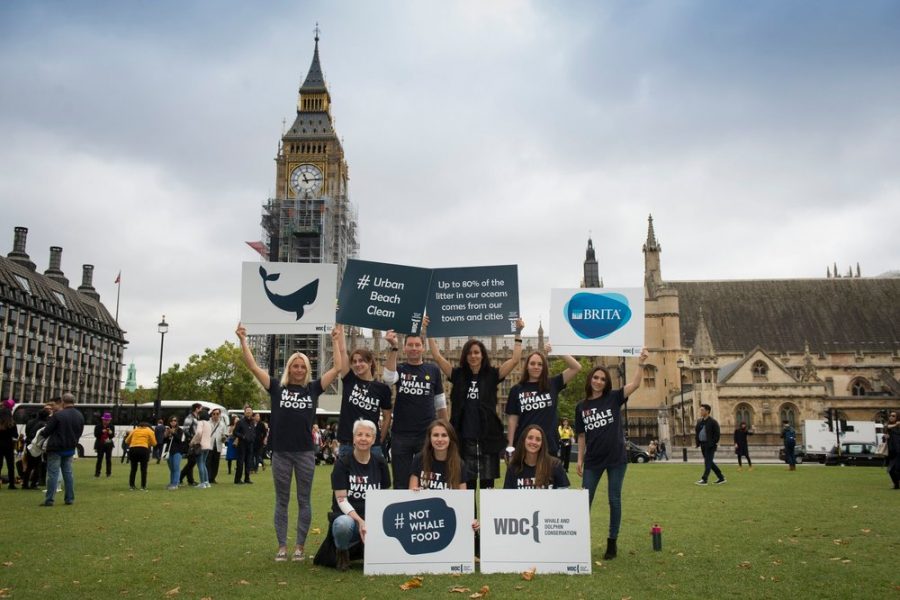 The campaign launched with an urban beach clean outside the Houses of Parliament in London, England, this morning. “The amount of plastic making its ways into our seas and oceans is terrifying and has severe consequences for marine life now and in the future,” said Springwatch star Michaela Strachan. “It’s heartbreaking to see pictures of whales and dolphins washing up on shores around the world because of the amount of plastic they have ingested – yet this is a totally avoidable problem. We don’t need to drop litter and we don’t need to use so much plastic. As this campaign makes clear, plastic is not food for whales or any other marine species.”

WDC’s research shows that at least 557 different marine species are known to have suffered from entanglement and ingestion of plastic plastic pollution including dolphins, whales, sea lions, and birds. The campaign points to rising numbers of incidents of whales and dolphins dying as a result, including a Minke whale who washed up on the Normandy coast with 800 kg of plastic waste in its stomach, and a Cuvier’s beaked whale in Norway who died after ingesting 30 single use plastic bags. A recent study has also shown that it’s not just whales and dolphins who are eating plastic, but that people who regularly eat seafood ingest up to 11,000 tiny pieces of plastic each year.

“On a daily basis whales and dolphins become entangled in plastics, unable to swim and feed, and if ingested, they can suffer terribly and even die,” said Chris Butler-Stroud, chief executive officer of WDC. “We are delighted to be launching the #NotWhaleFood website to make clear the scale of this challenge and celebrate the people and organizations that are doing their bit to tackle plastic litter. Whales play an important role in our marine ecosystems and are a key indicator of the health of our oceans and of the planet as a whole – they even help tackle climate change. It’s vital that we help to ensure that they can swim safe and free from plastic pollution to ensure a healthy future both for these amazing marine creatures, and for us.”