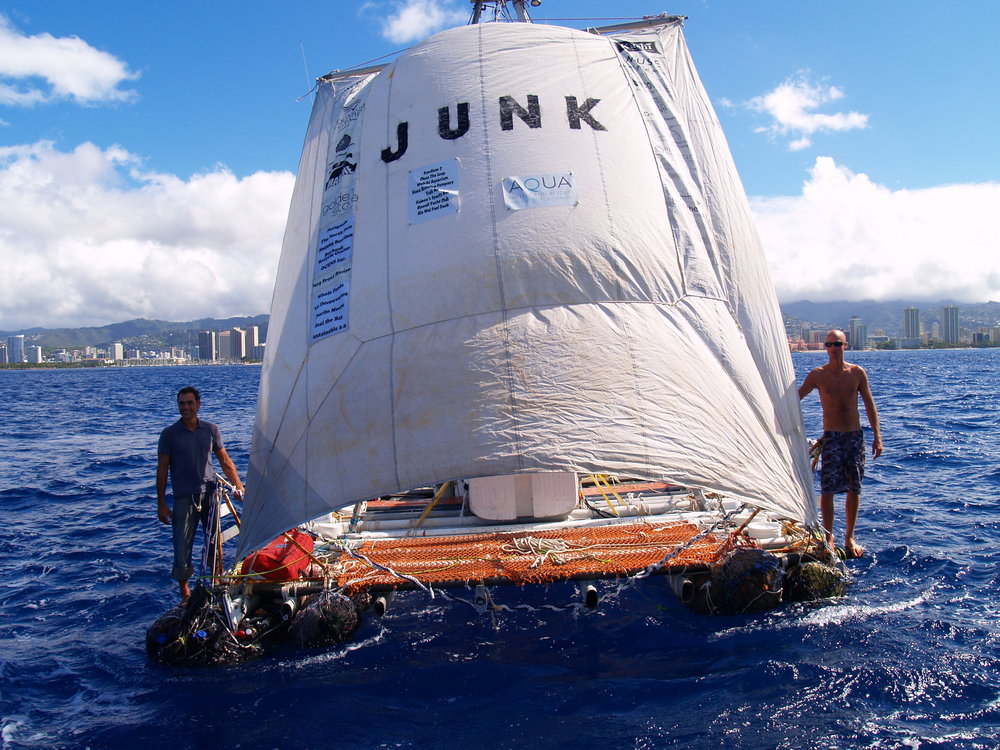 This is a selection of ‘JUNK RAFT: An ocean voyage and the rising tide of activism to fight plastic pollution‘ by Marcus Eriksen. Use code ‘PPC’ to purchase the book with 10 percent off.

“Hey babe, we’re sinking,” was the first thing I said to Anna after three days of storms at the start of our voyage to Hawaii riding 15,000 plastic bottles. We had left Los Angeles, using a Cessna aircraft as our cabin, probably the first airplane to float across the ocean.  It was a homemade raft made of, and appropriately named, “J U N K”.

It was the summer of 2008 and everyone was making wild speculations about how to clean up that fictitious island of trash in the North Pacific. There was no data about plastic pollution in the ocean south of the equator. We began the 5 Gyres Institute to bust that myth and do some science.

It took us five years to sail around the world on real research vessels, sailing through each of the five subtropical gyres, discovering a smog of microplastics that permeate all oceans, from the Arctic to Antarctica and every waterway between them.

We published in 2014, the first global estimate, but what it told us was that the oceans are full of degraded plastics floating in international waters, where no country and no company takes responsibility for it. We then went upstream. In the Great Lakes we discovered plastic microbeads coming from facial scrubs and toothpaste. Working with groups like the Plastic Pollution Coalition, Surfrider, Heal the Bay, Environmental California, Story of Stuff, and dozens of organizations across the United States, a massive campaign and ensued, and in 2015 President Obama signed the Microbead Free Waters act.

But on the JUNK in 2008 we did not know the global scale of the problem, or how hard the fight would be to bring this problem to the world stage. We were adrift with no motor, no chase boat, just two sailors and a satellite phone. We were three months at sea, twice as long as expected, finding plastic-filled fish along the way.

I reflected back to the 1991 Persian Gulf War. Sitting in a sandy foxhole with droplets of raw petroleum raining down on me, I thought long and hard about how I got there. “What’s worth fighting for” I asked then and a million times in the years that followed. The conclusion I always came to was conservation and human rights. Simply, we’ve got to protect the ecosystem services that keep the earth habitable, but if you’re ravaged by war, famine, racism, inequity of any kind, or just trying to survive, then there’s no time to commit to conservation. Social justice and environmental justice go hand in hand, and that realization began to emerge for me in the middle of that war in the desert.

The book, JUNK RAFT: An ocean voyage and the rising tide of activism to fight plastic pollution is the story of that voyage, and the power of coalitions working together to form a movement. “Constant pressure over time,” is the recipe to win, and the people and organizations that persevered to this moment are in this book. This book tells “OUR” story.

About that sinking experience? It’s in Chapter 5.

Marcus Eriksen is co-founder and Research Director for The 5 Gyres Institute. Marcus has led expeditions around the world to research plastic marine pollution, co-publishing the first global estimate and the discovery of plastic microbeads in the Great Lakes, which led to the federal Microbead-free Waters Act of 2015. He and Anna Cummins began 5 Gyres with an 88-day journey from California to Hawaii on the Junk Raft, built from 15,000 plastic bottles.